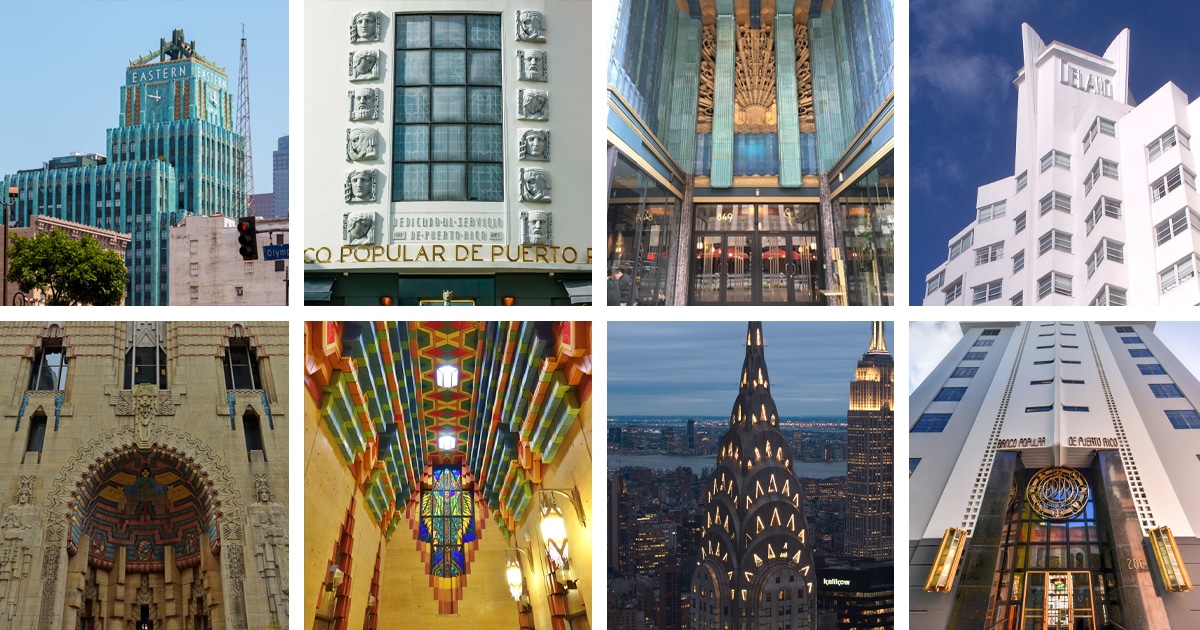 If this architectural style makes you think of The Great Gatsby or the roaring twenties, you have the right time period in mind. Art Deco was a popular but short-lived style that influenced graphic design, typeface design, art, fashion, furniture, and of course, architecture. Though it was not popular for long, Art Deco’s unique characteristics make these buildings easy to spot when compared to their contemporary neighbors.

Art Deco gets its name from the general Decorative Arts movements and was first found in the International Exhibition of Modern Decorative and Industrial Arts in Paris, France. Its translation to architecture first became popular in the early 1900s in Europe but became an international phenomenon in the 1920s and 1930s where it was used in glamorous civic buildings and other major projects.

The geometries of Art Deco, which can be found in other art forms, are often translated to incredibly detailed building ornamentation or interesting geometric facades. Most recognizable are the iconic vintage fonts and patterning that make so many of these buildings well-loved landmarks in the cities where they are found.

In this article, we break down some of the best examples of Art Deco architecture and the characteristics that define the style. 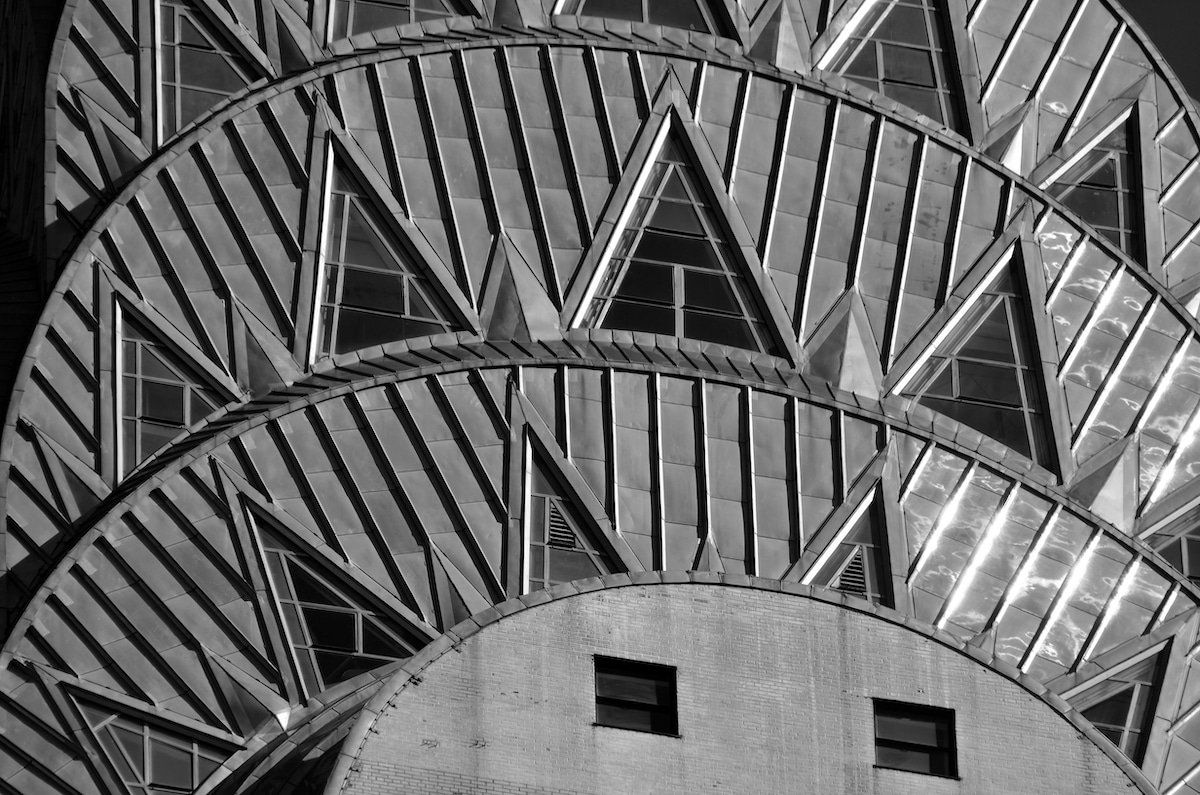 These intricately decorated or uniquely shaped buildings were often clad, or at least decorated, with modern building materials that signified an industrial age. This is fitting considering the entire art movement began at an exhibition on Industrial arts. 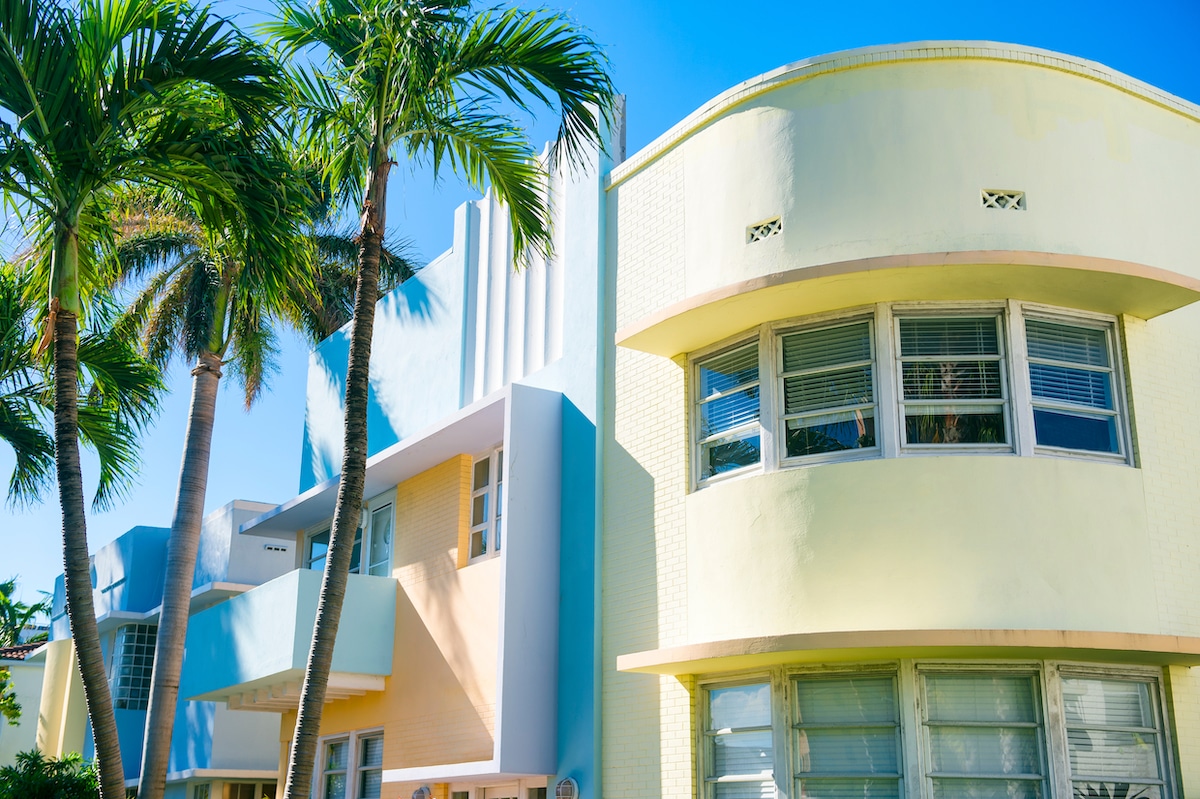 Curved corners are a common theme in Art Deco buildings. Other examples of bold gestural moves include curved entrances or jagged facades that use Art Deco patterns on a larger scale. 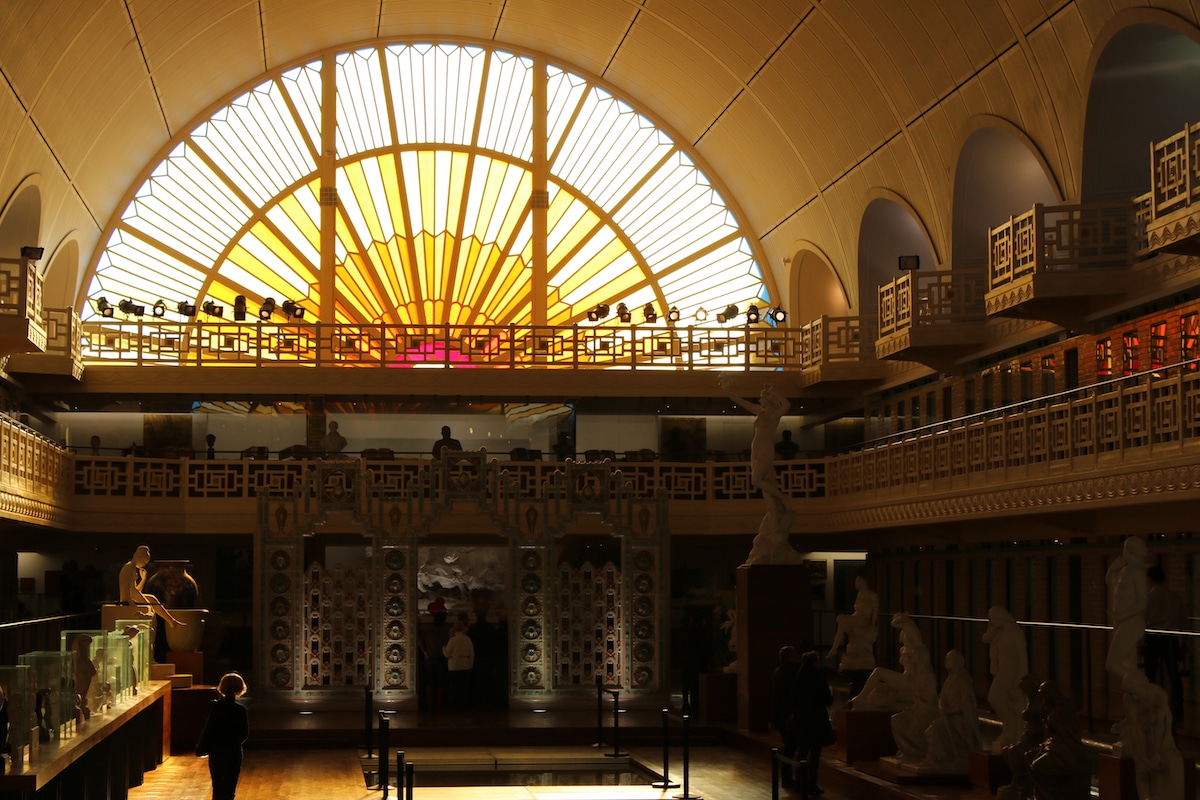 Many of the buildings designed in the Art Deco style include hotels, theaters, luxurious skyscrapers, government buildings, and other building programs designed to impress. The intricacy and glamour of Art Deco allowed for plenty of detail to create intricate and dazzling interiors reflective of the booming economy in many of these cities. 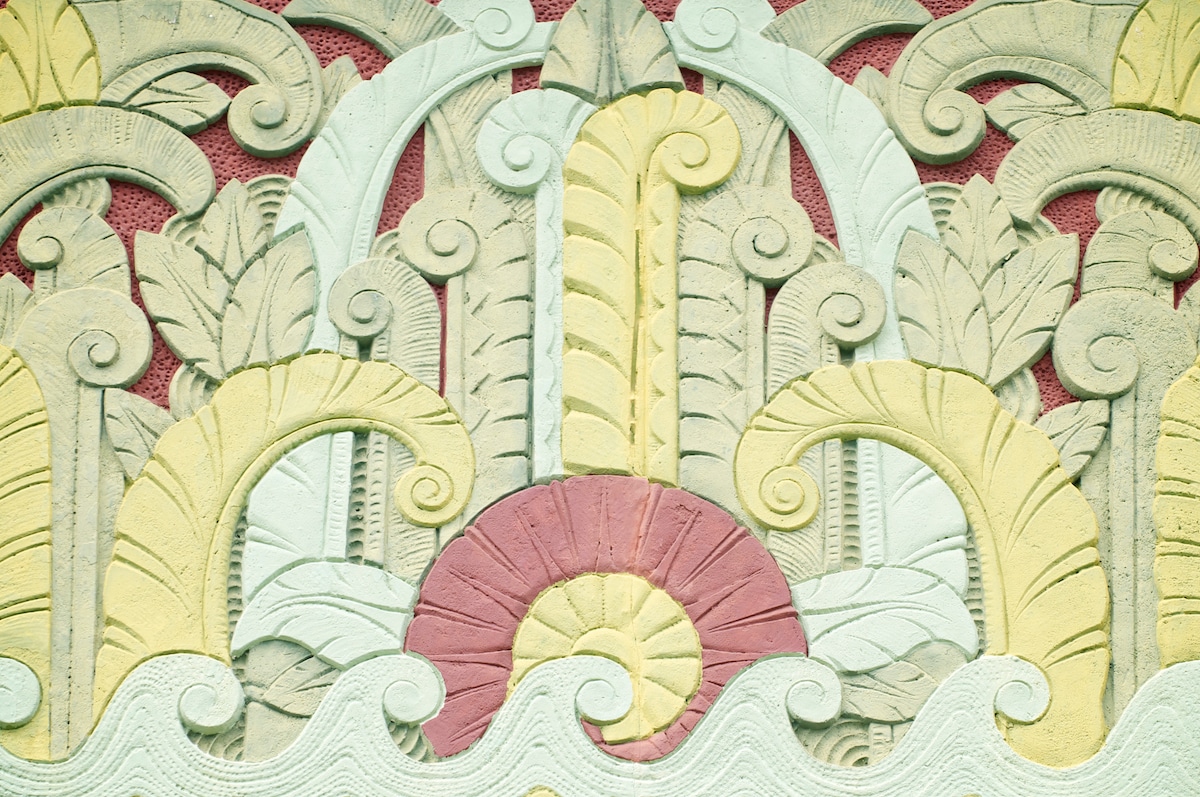 Popular patterns used in Art Deco design and architecture include the sunburst, sweeping curves, trapezoidal shapes, zigzags, chevrons, and more. These patterns can be found on building façades, windows or other panels, doors, furniture, and much more. They are also often used on a larger scale to create space or unique spires. Sunbursts are a popular motif that is often scaled to create signage or parapets to accentuate the building. The sunburst pattern can also be found in at least three of the five examples of Art Deco architecture on this list. 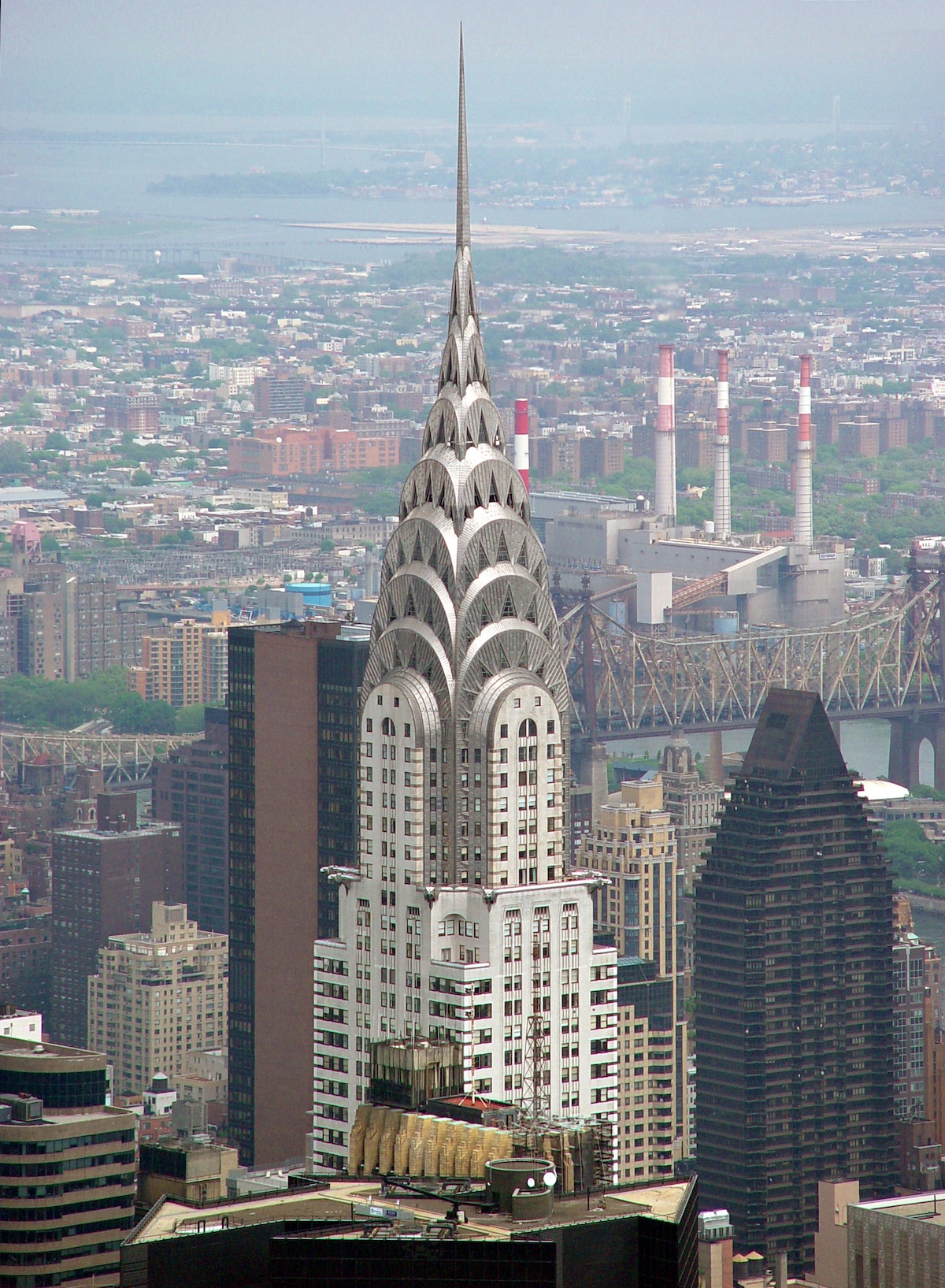 The Chrysler Building is probably the best-known example of the many Art Deco skyscrapers in New York City. The design style became popular in the city, in part, because of the 1916 Zoning Resolution that restricted building heights and called for setbacks for skyscrapers. The uniform setbacks as the towers rose higher in the sky created a similar layering found in Art Deco patterns.

In the Chrysler building, architect William Van Alen adorned each collection of building floors, as vertically separated by the zoning resolution, with new symbolism often following Art Deco ideas. One of these was the use of futuristic materials. This is why the iconic crown of the building is designed using Nirosta steel in the sunburst pattern popular in Art Deco. Ernest Edgar Thum, who wrote about stainless steels described the importance and design impact of this material decision in saying, “the use of permanently bright metal was of greatest aid in the carrying of rising lines and the diminishing circular forms in the roof treatment, so as to accentuate the gradual upward swing until it literally dissolves into the sky….”

Aside from the iconic crown and spire, there are plenty of other design ideas taken from Art Deco architecture. Modernized “gargoyles” protect the building at important corners. These metal statues include eagles to symbolize the U.S. and Chrysler radiator caps to honor the car company owned by Walter Chrysler who commissioned the project. The interior is also full of Art Deco influences. The lobby, elevators, windows, light fixtures, and entrances are all designed with modern materials and with Art Deco geometries depicted in silver and gold. All of these design elements prove that though the crown is what makes the Chrysler building famous, there are plenty of incredible Art Deco motifs to be found throughout this historic New York landmark. 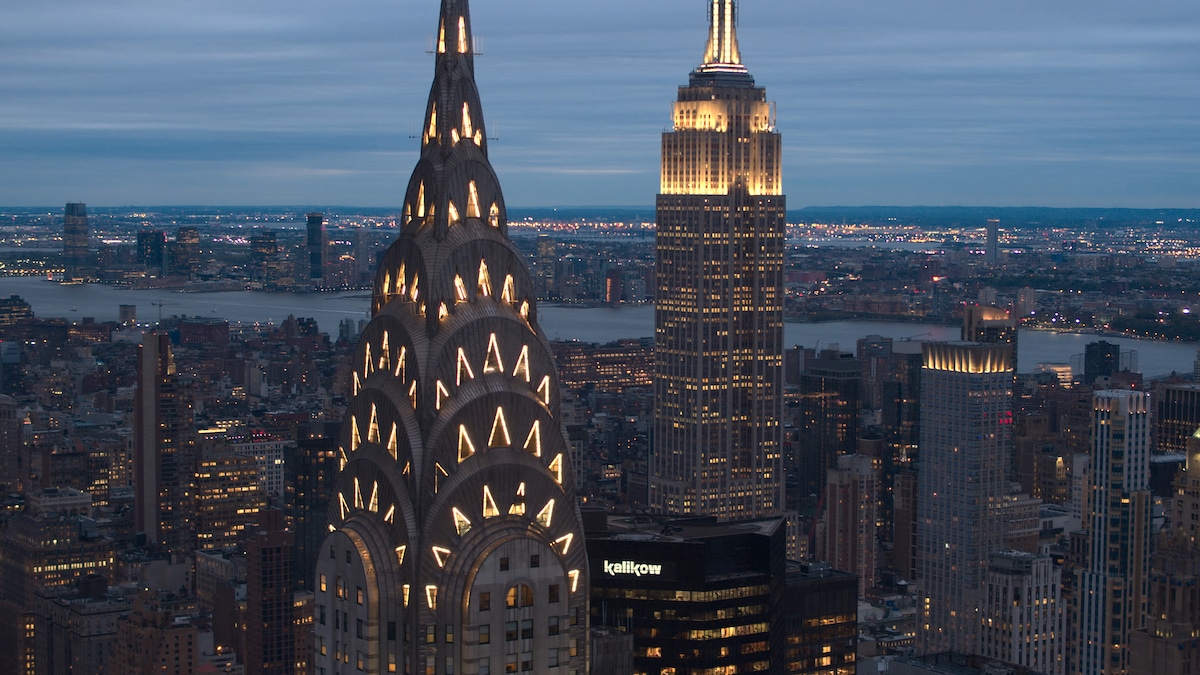 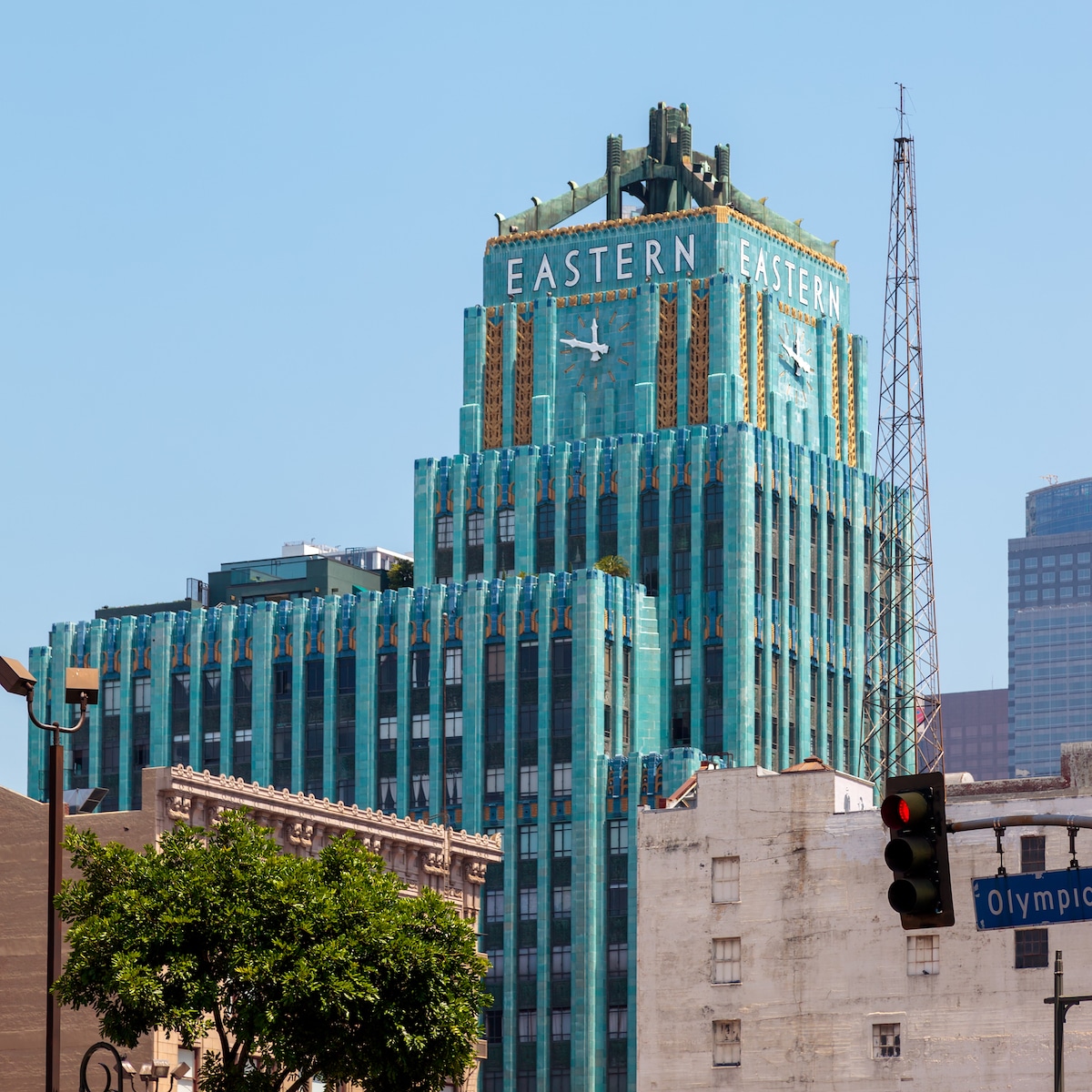 Though Los Angeles, like Miami and New York, has plenty of Art Deco buildings that will impress architecture-loving tourists, the Eastern Columbia Building deserves a place on this list because it carries so many characteristics of the style. Plenty of Art Deco geometries like sunbursts, chevrons, and zigzags are used as glamorous gold ornamentation on the turquoise tiles. These patterns can be found in other places too like the lobby, sidewalks, and even up at the clock tour and iconic “Eastern” sign. All of this incredible detail and its unique color all make this building deserving of its title “Art Deco Jewel of the West.” 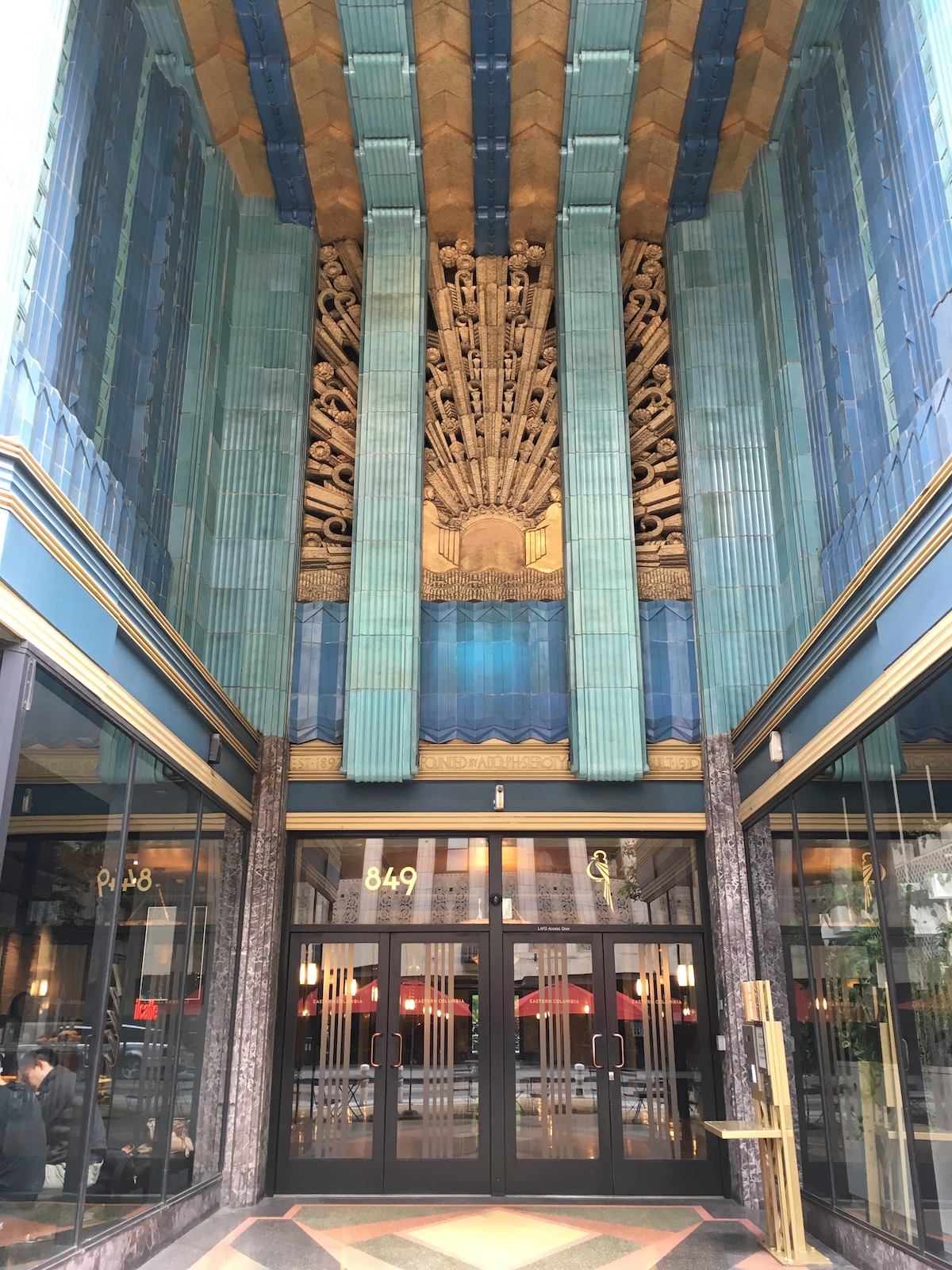 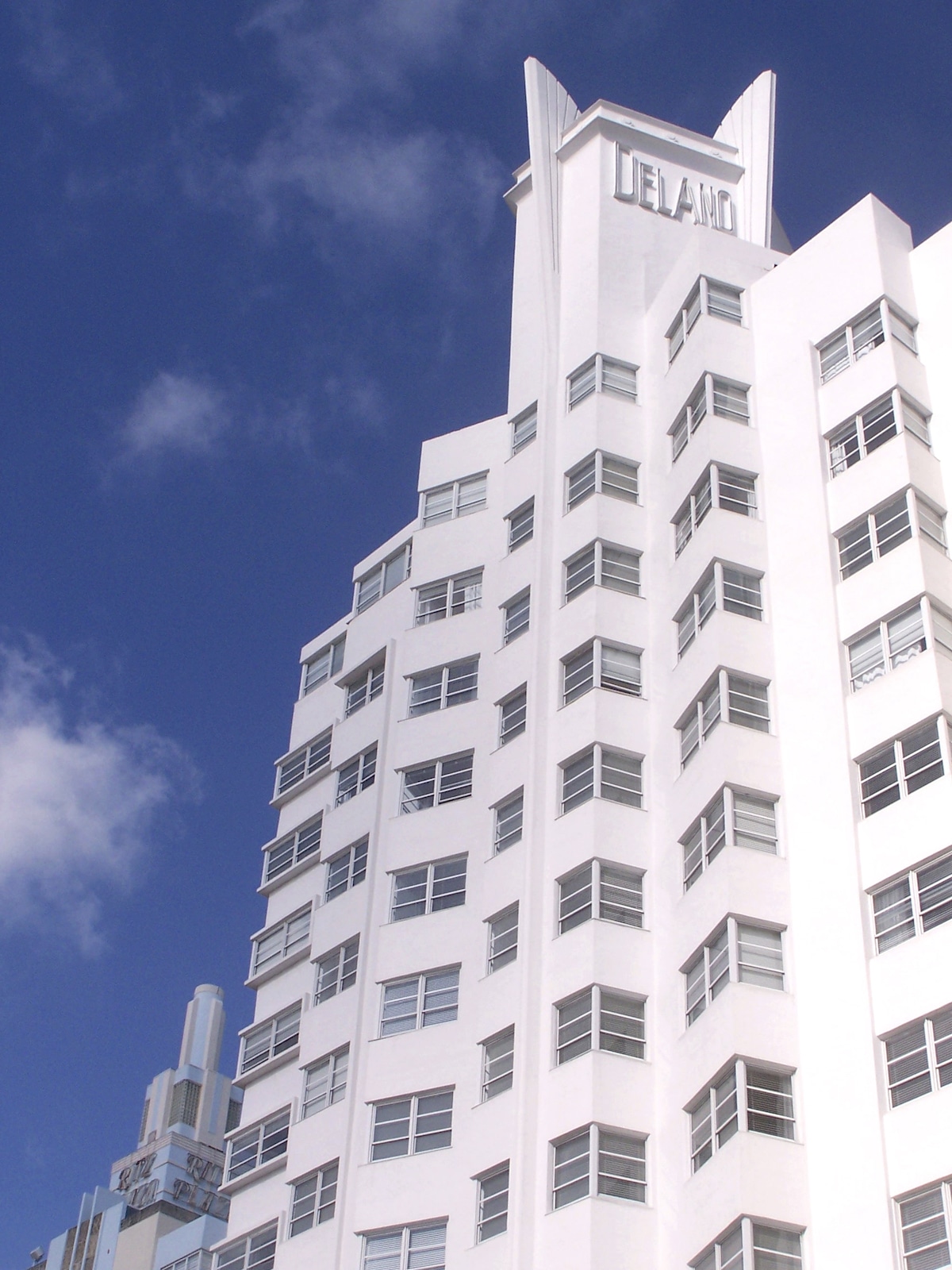 If you are visiting Miami for all of the incredible Art Deco architecture, there is no better place to stay than the Delano—named after U.S. President Franklin Delano Roosevelt. You will get to enjoy your trip from the Art Deco landmark while staying right on Miami Beach.

Designed by Robert Swartburg, the Delano is a perfect example of all the tropical Art Deco architecture to be found in this city. It also proves that although this style is usually recognized for its glamour and complexity, more minimal buildings were still designed in this short-lived period of architecture. Here, the geometry can be found in the unique folding of the building’s main façade. The Delano also includes an example of how Art Deco geometry was used to create unique “spires.” In this case, a spiky crown (or spire), is created from the traditional Art Deco sunburst pattern that acts as a form of signage and makes the hotel easy to spot. 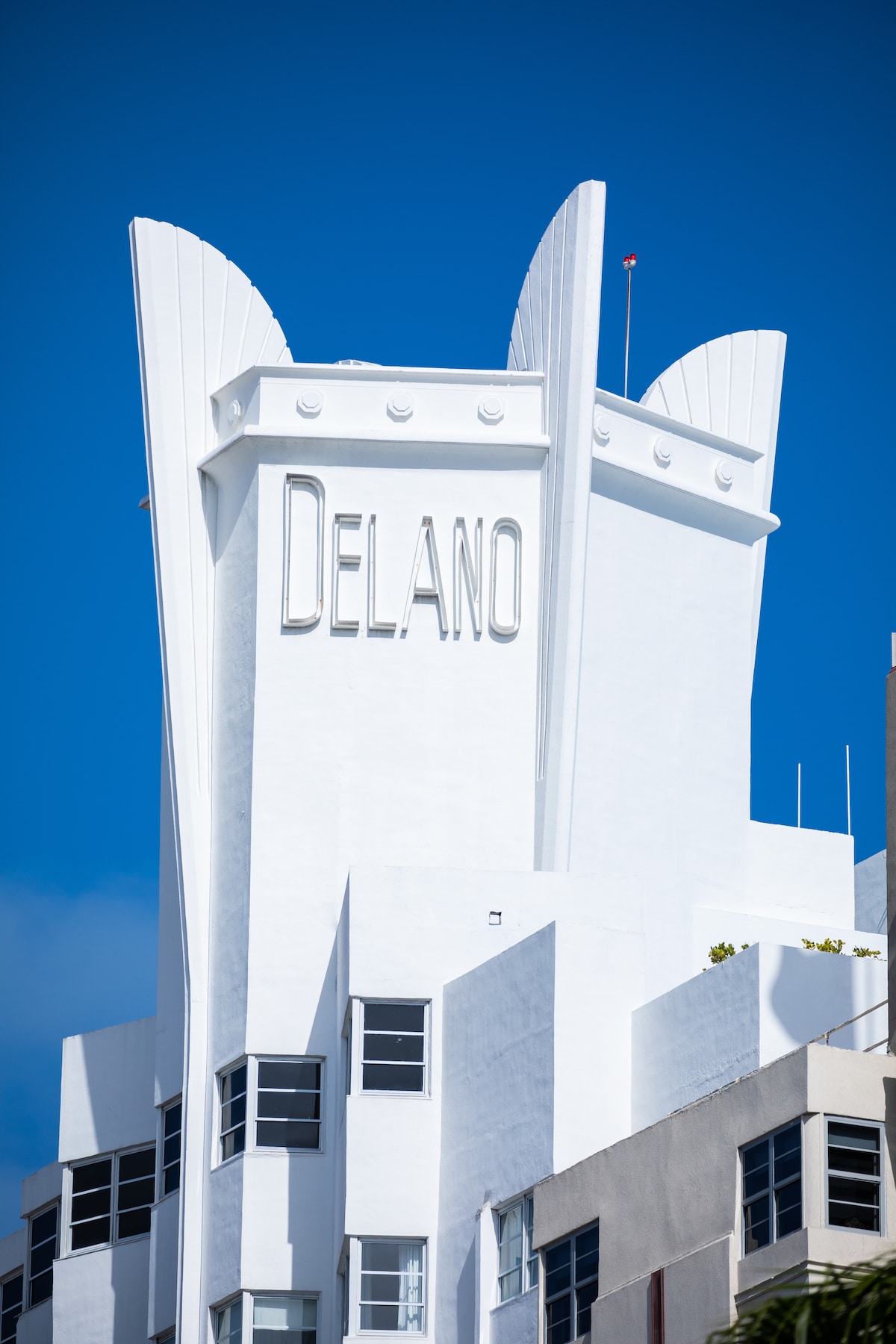 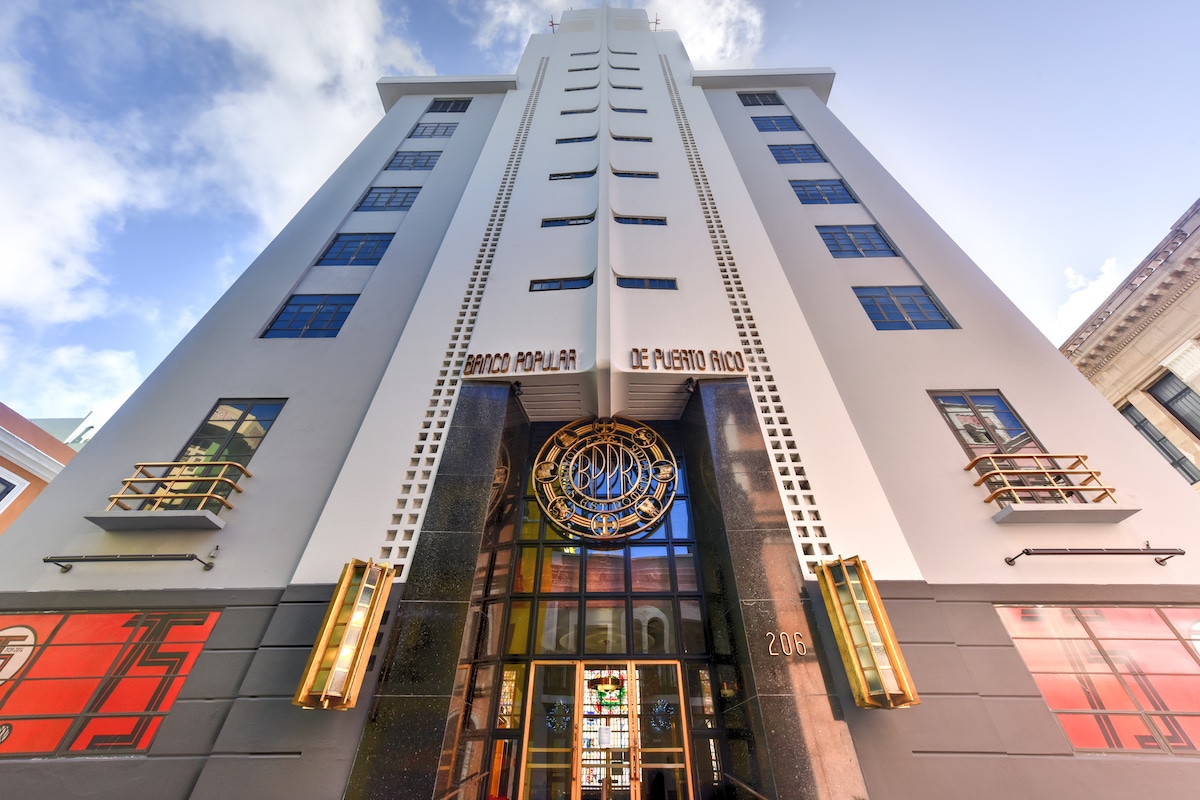 The Banco Popular Building in San Juan, Puerto Rico was designed by Osvaldo Toro in the Art Deco style. It was commissioned to serve as the headquarters of the financial institution Banco Popular de Puerto Rico.

This building’s main facade includes incredible sculptural details all done in the Art Deco style with individual gray tiles and two eagles guarding either side of the entrance. Windows are designed with detailed geometric patterning found in graphic design and art of the time. Fonts used throughout signage on the building feel right out of a Great Gatsby poster.

The Banco Popular Building is a great example of how recognizable the Art Deco style can be and how easily it can be translated across different scales of ornamentation on a building. 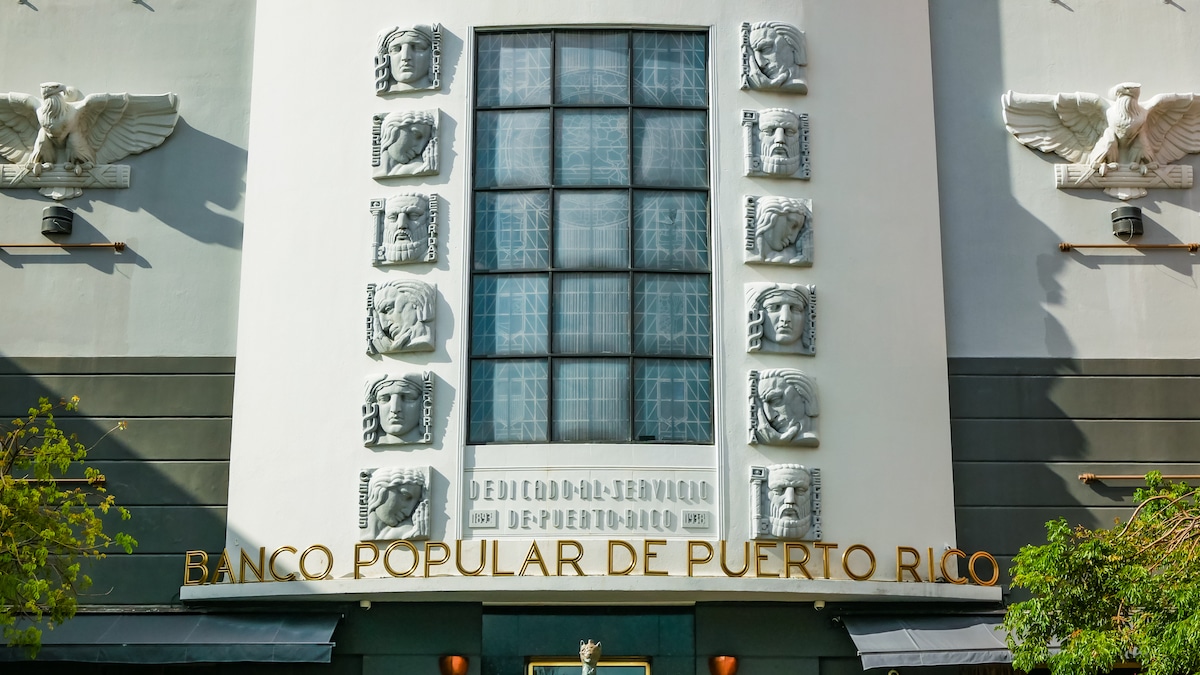 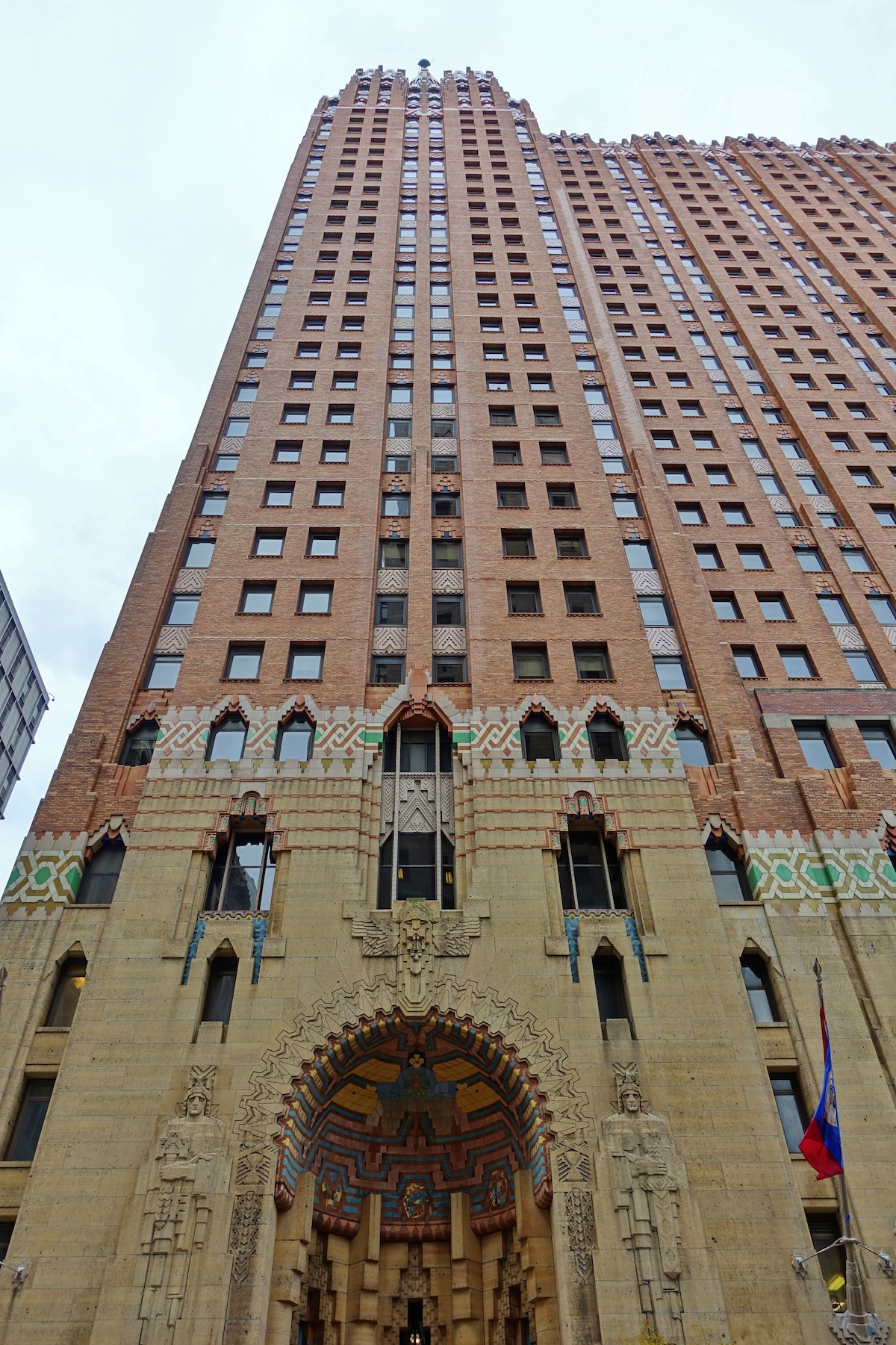 The Guardian Building is an office building in the financial district of Detroit, Michigan, that was constructed in 1929. Its unofficial name is the Cathedral of Finance which hints at this structure’s unusual design. Some of its cathedral-like qualities include two asymmetric spires at the top of the structure and the incredible ornamentation on the building’s interior and across its brick façades. The ornamentation makes it recognizable as a great example of Art Deco architecture through its geometric patterning. Unlike traditional cathedrals though, the designs that adorn this building are inspired by Native American art and use earth tone materials like tile, limestone, and terra cotta in addition to the brick cladding.

It is only fitting that the Cathedral of Finance would have a motto describing the purpose behind its unusual design and commission. The motto can be found on a tile mosaic on the building and reads: “Founded on principles of faith and understating, this building is erected for the purpose of continuing and maintaining the ideals of financial services which promoted the organization of the institution.” 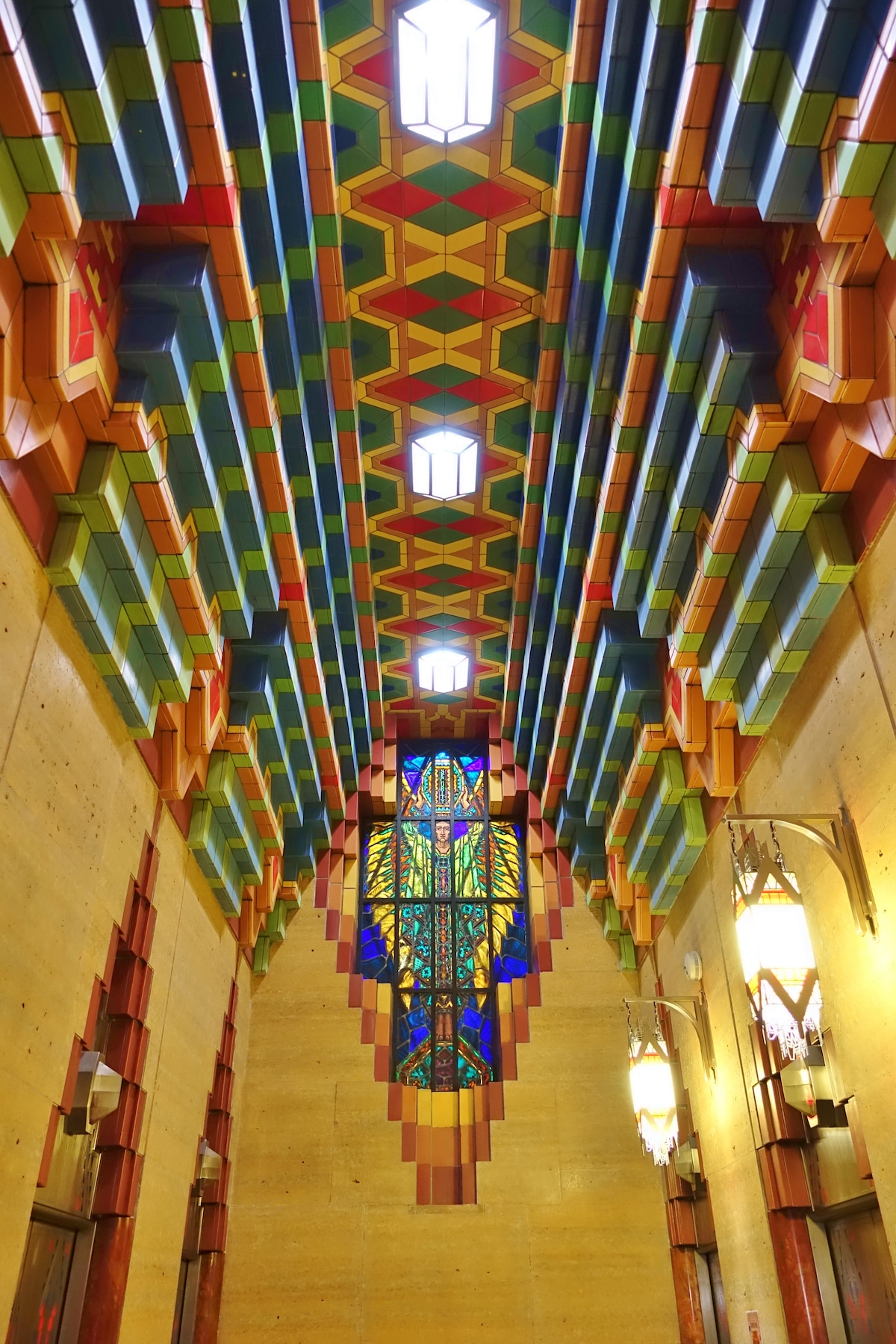 READ: 5 Art Deco Buildings That Embody the Vintage Glamour of This Architectural Style

Bill Gates and wife Melinda’s modest parenting style: the Microsoft centibillionaire’s kids go to church and will inherit ‘only’ US$10 million each | South China Morning Post

Why is Gwyneth Paltrow selling a candle that smells like her vagina? | Fashion | The Guardian