Like most of the world, Bill Oram is remembering the Queen’s late husband. But the Queensland stockman isn’t thinking about Royal visits or videos or newspaper articles.

He’s thinking about one of the toughest men he ever met — a boss with a fascination about Australia whom he admired greatly.

He’s remembering a dare, and a letter he sent to the Queen begging for a job in the Royal stables.

And he’s wondering still — 40 years on — how on earth it all came off.

What are the odds?

It’s 1980 and 18-year-old Bill Oram is travelling from the tiny Queensland town of Baralaba — population roughly 300 — to Windsor Castle. Months before, he’d sent a letter the Queen asking for a job at the stables telling her how he grew up riding horses with his grandfathers — both “excellent horsemen” — and about his fascination with the Royal Mews.

“A mate of mine made a bet that I wouldn’t be game to,” he said.

“Mum thought it was a bit of a joke … she made me write it a second time to correct the mistakes.”

He never for a second thought it would come off. In fact, he’d “almost forgotten about it” when he received a response saying a job had come up at Prince Philip’s stables.

“And Prince Philip would be in Canberra if I wanted to make myself available for an interview,” Bill said.

“That was the most casual job interview I’ve ever had.

“At that point I thought this was pretty crazy.”

It got crazier again when, almost impossibly, a job offer on Royal letterhead arrived at his Baralaba home.

It told Bill that if he accepted he would join three “very nice men looking after the Duke of Edinburgh’s Driving Horses”. 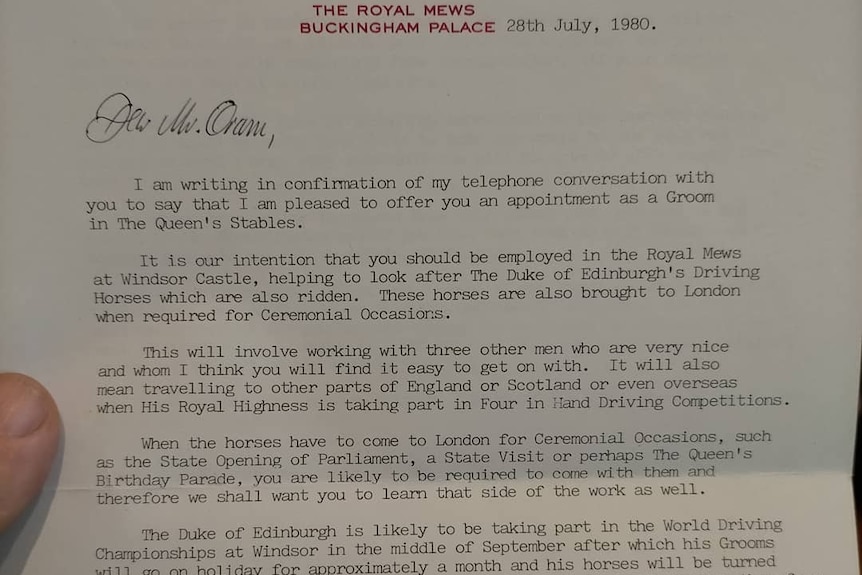 Riding with a prince in the snow Bill would go on to ride with the Prince at the European Driving championship in Zug, Switzerland, in 1981, where they placed 10th.

Prince Philip gave the plaque to Bill, which he holds as a memento of “a really formative part of my life”.

For almost two years, Bill told Prince Philip stories of growing up in rural Queensland as they drove together in rain, hail, sleet or shine past the chapel that would become Prince Philip’s final resting place.

“I learnt very early not to look outside and watch the sleet coming downing thinking we won’t be out today, who would drive in this because he would,” Bill said.

“We would drive out of that big double oak gateway with the team of four horses; it would either be turn left or turn right and if you turned right you went straight past [St George’s] chapel.”

When he heard of Prince Philip’s passing, Bill said he remembered a man who had some “very strong personal traits”. “I became very fond of him,” Bill said.

“He loved Australia. He was very interested in what I had done growing up in Australia.

“People often ask me how proud I am of it, but I’m really a lot more proud of being a teacher,” he said.

“The students are aware of the opportunity I got … I’ve taught a few lessons around motivation and, yes, if you don’t ask you don’t get. And, if you don’t have a crack, you’ll never know.”

Foreign News Laughs at Biden: He ‘Needs a Retirement Home and a Warm Bowl of Soup’