The unaffordable conditions for Australian home buyers are spilling into the rental market for coastal families, and locals say it’s destroying the very reason these towns are popular in the first place.

Landlords from Byron Bay, Yamba and Noosa to Lorne and Apollo Bay are jacking up rents as the popularity of seaside towns continues climbing while lockdowns roll on in cities.

Rents rose last year along the coast as people, especially in Victoria, fled to the freedom of the regions. But they continued their climb well into 2021.

In the 12 months to July this year, average rental prices in Byron Bay rose by almost 30 per cent, according to CoreLogic data. In Noosa, rents increased by almost 25 per cent. In Yamba it was 16 per cent, and Apollo Bay almost 11 per cent. But the consequences for the towns themselves are even higher, locals and experts say. When businesses and young families can’t afford to stay, the fabric of the community will fall apart.

Renters in Victoria’s Apollo Bay are so desperate to stay in the town they have asked friends if they can camp in their backyard. Others are moving every six months as landlords refuse to put their properties on the market for any longer, instead cashing in on Airbnb.

When long-term rental listings do arise, the prices are far outside anything most people in the town can afford.

“They are Melbourne prices, but no-one here makes Melbourne wages,” said Natalie Morrow, a mother of five who, along with her husband Virge, has until November to find a new place to live.

“The owner [of our house] wants the house back for their own use and there’s nothing for us to move into,” Mrs Morrow said. The couple applied for a home loan to buy a house in the town before the pandemic hit but were told they had too many children to qualify for the loan.

But rents are now so high they outstrip what the couple would have been paying in home loan repayments had they been given the loan in the first place.

The Morrows aren’t only concerned about their welfare, but for the town they have called home for nearly two decades. They fear how Apollo Bay will survive if the families who run the local businesses, volunteer for school events, festivals, and at the footy club are no longer around.

“We are so entrenched in this community. With five kids, my fingers are in literally every community pie,” Mrs Morrow said.

Local businesses have fielded complaints from visitors about slow service or reduced opening hours because there aren’t enough staff left in the town to work, she said.

Deakin University honorary professor Louise Johnson said the plight of families in coastal towns up and down Australia’s east coast was the result of the country’s housing policies.

“Housing is a financial asset. It’s something you buy and sell and accumulate for your super or your kids. It’s called the financialisation of Australian housing.

Professor Johnson said sea change was happening before the pandemic struck, but ongoing lockdowns in Sydney, Melbourne and Brisbane exacerbated people’s fear of cities while promoting the safety of regions.

“There’s this sense that cities are unsafe. That anxiety has lessened since last year but there are still major outbreaks and the sense the city has no security,” Professor Johnson said.

“We need more open spaces, we need to get away from the city and be able to escape and work.” Even if more houses were built, she said, without rules that ensured the prices were affordable and reserved for workers and families, they would be scooped up by investors.

In Apollo Bay, supply isn’t the issue with roughly 70 per cent of homes in the town empty over winter, according to Colac Otway Shire.

Professor Johnson agreed families like the Morrows were often the “backbone” of small towns.

“We’re going to lose the character of these places. They used to be quite diverse,” she said.

Shire councillor Graham Costin said the town was in “a perfect storm”.

“[It’s due to] record low interest rates and the rise of rental platforms and lockdowns in the metro area,” he said.

“There’s a lot of people from Melbourne with spare cash who are investing in property because they can’t travel overseas.”

He said up the road in Marengo the average price of a house had hit $1 million — a 45 per cent rise on pre-pandemic levels.

“Young families are the fabric of the town. They keep our community strong and vibrant and keep the school going,” councillor Costin said.

“They are volunteers for our events and CFA and sports club and if we don’t have a continuing number of young families the town will go backwards.”

James Allan is the president of the Chamber of Commerce in Yamba, NSW and said the town was suffering from a lack of housing for its tourism and hospitality staff — a pattern playing out along Australia’s east coast.

He said the chamber and the council had approached the owner of portable buildings to house hospitality workers.

The buildings have a communal kitchen and bathroom and had been used to house road workers but are now standing empty.

The owner wanted $250 a week for each person staying, including electricity, which was well out of the price range for the town’s workers.

“Last summer we had an oversupply of tourists but an undersupply of workers, so big restaurants and cafes had to reduce their hours in summer when there were people everywhere with money to spend because they didn’t have the staff they needed,” Mr Allan said.

Young families, he said, were key to ensuring the town and local economy kept growing.

“They are obviously the ones that are more financially strapped if they are working in lower-level operational jobs,” he said. Such is the problem, the Colac Otway Shire in Victoria’s west has created a taskforce to investigate community land trusts, tiny houses, and higher-density residential areas close to the main street.

It’s also looking at how short-term stays like Airbnb could be banned or limited, as well as rate concessions for people who offer their properties on the long-term rentals.

“The returns for long-term rentals aren’t as good as Airbnb. So we could make it financially attractive,” Cr Costin said.

Council officers will present possible solutions to the council next month and everything is on the table, Cr Costin said. 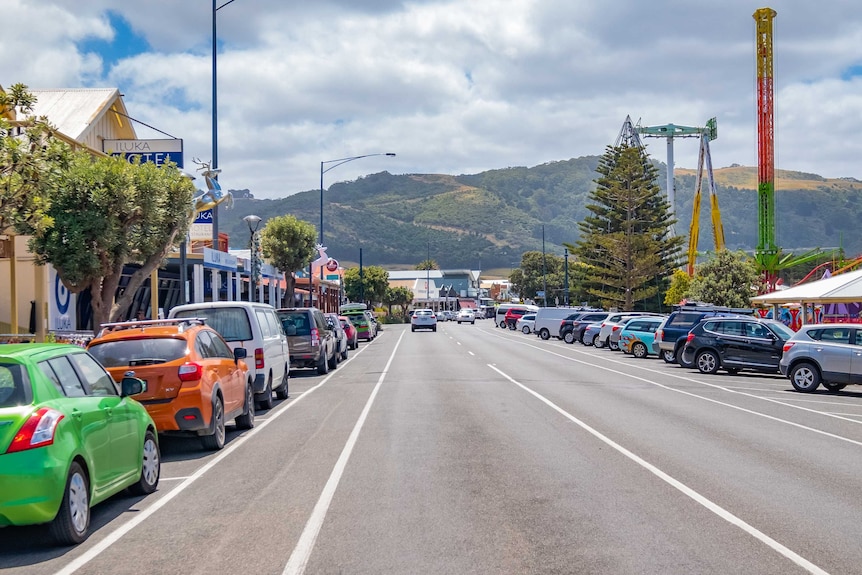 The taskforce has surveyed properties to find out how much available land there is for temporary tiny houses and caravans.

Banning or limiting the number of properties put on Airbnb is something Cr Costin wants the council and state government to explore.

While it hasn’t been done in Victoria before, Hobart Council in Tasmania is trying to introduce short stay accommodation regulations to prohibit new permits being issued for entire homes.

“European cities like Barcelona are also putting upper limits on the number of houses on Airbnb,” Cr Costin said. As for the Morrow family, they have lived in Apollo bay for 16 years and have been on a waiting list for a new home for four.

While they are desperate, they consider themselves lucky to have a roof over their head until November; some families have just a few weeks or days to find a new place to live.

But if they, and other families, are kicked out, Mrs Morrow says the bay will turn into a ghost town.

Franklin Graham on Easter this year: ‘Our only hope is God’ | Fox News