ERIK TEN HAG went old school against Real Sociedad by chucking on Harry Maguire UP FRONT for the last 10 minutes.

BT Sport commentator Robbie Savage could barely believe it when the centre-back was introduced in place of Alejandro Garnacho.

With United needing another goal to qualify top of their Europa League group, Ten Hag turned to the 29-year-old defender.

His thinking was quickly explained when Maguire went and stood up front next to Cristiano Ronaldo.

The defender was put up front in the hope of winning knockdowns from hopeful long balls forward.

But Maguire is unlikely to retain his position, despite Ronaldo’s recent woes, after failing to make the desired impact as a striker. 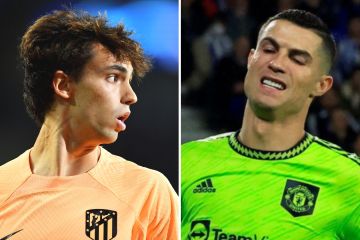 And Savage was left astounded by the fact he was seeing Maguire and Ronaldo playing up front together in a competitive match.

He said on BT Sport: “I never thought I would see Harry Maguire and Cristiano Ronaldo playing up front together for Manchester United.”

Fans on social media were left equally as baffled.

Most read in Football

One wrote: “Maguire as a striker, I’ve truly seen it all.”

Another joked: “Handing in my resignation if Maguire at striker scores before Ronaldo.”

And another said: “Maguire is playing as second striker to Cristiano Ronaldo, name me a better duo.”

United now face a play-off to reach the Europa League last 16, with Barcelona, Ajax and Juventus all possible opponents.

Maguire failed to inspire United to a second goal[/caption]

54 Scandalous Dresses That Made People Lose Their Sh*t