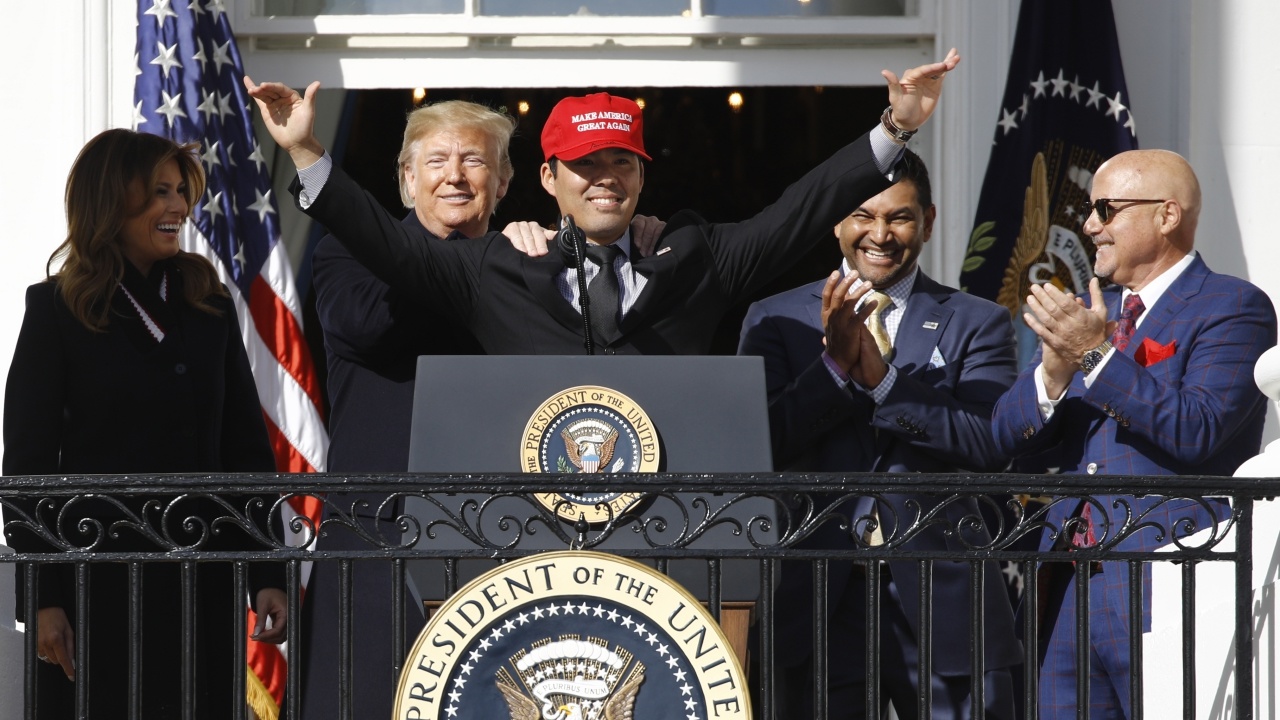 Because this is the state of our politics nowadays, the past few days have seen the Washington Nationals World Series victory overshadowed by the team’s visit to the White House. When catcher Kurt Suzuki donned a MAGA hat and first baseman Ryan Zimmerman praised Trump, Woke Twitter erupted and another outrage cycle began—and has yet to dissipate fully.

At this point, anger with celebrities for their politics has become a normal function of our culture. And frankly, it’s exhausting. Yet, when entertainment becomes a substitute battleground for politics, it’s also inevitable. We not only welcome, but expect our celebrities to actively advance our political agendas. But for the sake of American discourse, we must re-learn the value of separating entertainment from our politics.

The root of this conflation problem originates from a psychological phenomenon called “the halo effect.” We seem to presume good characteristics from a person simply because we appreciate another characteristic about them. For example, person A is talented at X, so that person must also be talented at Y. With celebrities, we incorrectly assume they have expertise in whatever they do, which is why we care deeply about their political and cultural viewpoints. And their silence is perceived as complicity, as we saw with the bizarre campaign to get Taylor Swift to denounce President Trump.

With celebrities, we incorrectly assume they have expertise in whatever they do, which is why we care deeply about their political and cultural viewpoints.

Under this paradigm, it’s only natural that we end up having female soccer star Meghan Rapinoe questioned not solely on her athletic success, but also her thoughts on the president and the state of the 2020 election. Some have even gone so far as to suggest that she become a politician one day.

But whenever celebrities espouse political views that run afoul of our expectations, it engenders a startling, gag-like reaction because we assume, often erroneously, that they were enlightened and adherent to our political vision. This leads certain conservative figures to behave rather hypocritically, such as when they demean Lebron James, telling him to “shut up and dribble” while extolling Kanye West because he supports the president.

But of course, expertise is not transferable. A great baseball player can have a tough time understanding Alexander Hamilton’s writing. A renowned popstar can make for a lousy thinker. There is not one good reason why MSNBC, a purportedly serious network, needs to interview actor Robert De Niro about impeachment or director Rob Reiner about the findings of the Mueller Report. Neither of these figures have any especially unique insight or political experience.

Of course, Kurt Suzuki and Ryan Zimmerman have been venerated by Trump’s base and targeted by the Resistance. Surely, many more figures will follow their lead and occupy the news cycle for all of the wrong reasons.

The only remedy for all of this, then, is to fortify the separation between entertainment and politics.

The only remedy for all of this, then, is to fortify the separation between entertainment and politics. That requires celebrities to push back against calls to disavow certain figures on the basis of politics. Things looked hopeful when Ellen DeGeneres recently stood up for her friendship with George W. Bush, despite profound political differences.

But more importantly, it requires the American people to detach themselves from the political hysteria that has infected every aspect of our daily lives. The reality is that some celebrities are smart—but many aren’t. We shouldn’t presume political prowess because they’re talented in other arenas. And we shouldn’t crave their opinions or denounce them when they disagree with ours. In other words, we need to recognize that they are regular people, and we should approach their viewpoints no differently than we would anyone else’s.

Memorable Trump feuds with celebrities from 2019

Angelica Ross, Jameela Jamil, And Other Celebrities Speak Out For Spirit Day

Kenya: Here Is Why Lupita Is One of the ‘Most Dangerous’ Celebrities Online

Happy 420! Celebrities Who Are Blazing Trails In The Cannabis Industry