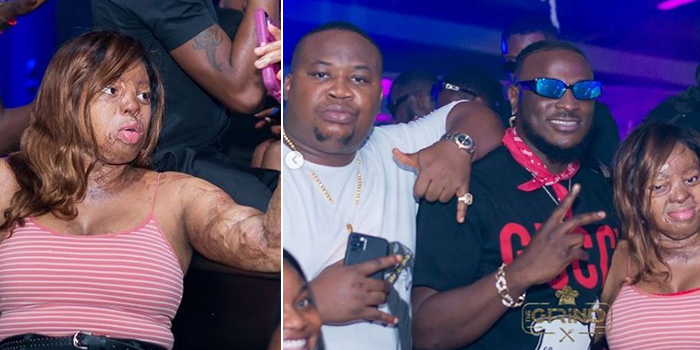 America’s Got Talent 2017 finalist Kechi Okwuchi turned 30 yesterday, October 29, and she turned up with some Nigerian celebrities. Kechi who is also one of the two survivors of the Sosoliso plane crash in 2005,  on Tuesday held a party which was attended by people from all walks of life including celebrities.

The party was held at Cubana Club, Victoria Island, Lagos. Some celebrities who attended the party include Peruzzi, Zlatan, and Naira Marley. Also at the occasion was former housemate of Big Brother Naija 2019 edition, Ike Onyema.

See some photos below:

Recall Kechi earlier on Tuesday went to her IG  page to celebrate herself as she turned 30. Kechi shared her birthday photos on Instagram with the caption ;

Happy birthday to me #30thbirthday #happybirthdaytome”.

Kechi, a musician and motivational speaker, whose story exemplifies life after tragedy, had in a post on Instagram on Tuesday said she was flirty and thriving at age 30.

She was one of two survivors on board the December 2005 Sosoliso air crash that crash-landed at the Port Harcourt International Airport claiming 107 lives.

The talented singer was a finalist for the 12th season of talent show, America’s Got Talent, in 2017 as she made headlines around the world battling to a sixth position in the finals.
She has undergone over 100 reconstructive surgeries due to injuries and burns.

The former student of Loyola Jesuit College, Abuja is a Shriner’s Hospital advocate for burn victims.