A child has died and several others are in a critical condition after wind picked up a jumping castle and threw it into the air at an end-of-year activity day at a Tasmanian primary school.

Several children fell from a height of 10 metres, causing serious injuries, when wind blew the jumping castle into the air at Hillcrest Primary School in Devonport, in the state’s north-west.

“A wind event caused a jumping castle to lift into the air,” Tasmanian police said in a statement.

“Several children fell from a height of about 10 metres around 10am and are currently receiving medical treatment at the scene as well as in hospitals.

“Sadly, one child has died and a number of others are critical.”

Police said no further details about the fatality could be released at this stage for privacy reasons. As well as multiple ambulances sent to the school, several helicopters also went to the scene to take the injured to various hospitals.

It is not yet known how many children have been injured.

Police will hold a media conference to give updates early this afternoon.

Witnesses said it was a very confronting scene with police and parents rushing towards the school.

Police have been seen crying and embracing at the scene and many parents arrived at the school not knowing if their child had been affected. Blue tarps were erected near the tree where the jumping castle came to a rest, close to the school oval.

People are being asked to avoid the area.

The school was running an end-of-year “Big Day In” celebration instead of a usual school picnic. 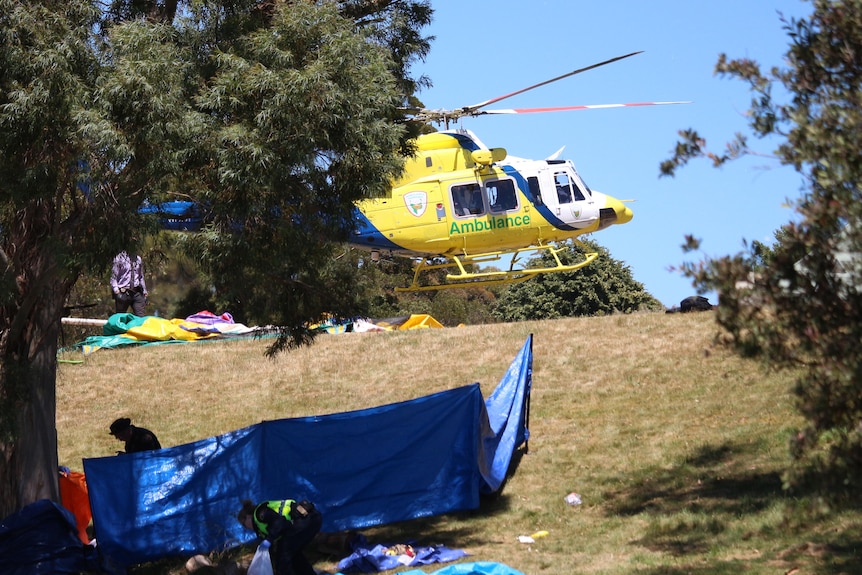 Tasmania’s Premier Peter Gutwein was at a COVID-19 press conference in Hobart just after the incident.

He described it as “serious”.

“My thoughts are obviously with the people involved but obviously the parents of the children that have been injured and with the emergency services,” he said.

“As we receive further information on what I understand is a very serious matter we’ll provide that as the day progresses.” Set the ABC News website or the app to ‘Tasmania Top Stories’ from either the homepage or the settings menu in the app to continue getting the same national news but with a sprinkle of more relevant state stories.

Here’s a taste of the latest stories from Tasmania: