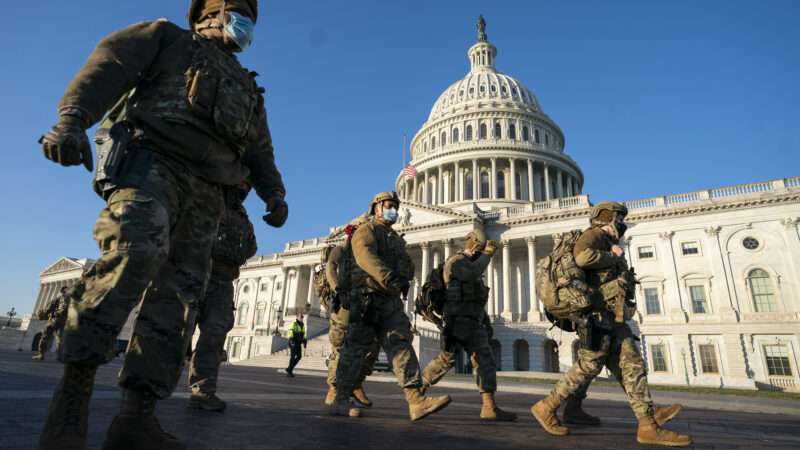 After the 9/11 terrorist attacks, horrified Americans were ready to embrace virtually any proposal that promised to keep them safe. Government officials, for their part, were eager to curry favor with the fearful public and saw an opportunity to promote legislation and policies that had failed to win support in the past. The result was a surge of authoritarianism from which the U.S. has yet to recover. Now—with the public understandably concerned after the January 6 storming of the Capitol—we should brace ourselves for another wave of political responses that would, again, erode our liberty.

“We’re going to have to figure out how we rein in our media environment so that you can’t just spew disinformation and misinformation,” Rep. Alexandria Ocasio-Cortez (D-N.Y.) told her Instagram followers this week. “It’s one thing to have differing opinions but it’s another thing entirely to just say things that are false. So that’s something that we’re looking into.”

The socialist lawmaker isn’t always careful about her words, but it’s worrying when officials talk about a need to “rein in” the media in any context. There’s really no way to cast government action to that end in a good light, no matter what policy tools are intended (Ocasio-Cortez’s office hasn’t responded to a request for comment). To let government agencies “rein in” the media is to put control over speech and the press in the hands of people who always see benefit in less scrutiny and criticism of their own activities.

That free speech might well take a hit is apparent from the pasting law enforcement is getting for, allegedly, being too considerate of First Amendment rights before the events at the Capitol.

“FBI intelligence analysts gathered information about possible violence involving the U.S. Capitol on Jan. 6., but the FBI never distributed a formal intelligence bulletin, in part because of concerns that doing so might have run afoul of free speech protections,” NBC News reported on Tuesday.

The report goes on to reveal that in preparing for the protest that degenerated into a riot, the FBI did share intelligence with other law enforcement agencies, neglecting only to issue a formal Joint Intelligence Bulletin. But the overall impression left by NBC and by the behind-the-scenes leaks from officialdom on which its reporting is based are that respect for free speech got in the way.

Since then, the FBI has made up for lost time, issuing a bulletin highlighting the “threat of violence” from a range of “ideologically diverse” extremists. The danger is real, as the violence of January 6 demonstrated. But so is the danger of an unrestrained federal agency with a history of interference in domestic policy debates, spying on activists, and even trying to sabotage political parties—revealed in great detail by the 1976 Church Committee report. An FBI stung for being too respectful of individual rights in the recent past may return to its old habits in the future.

In its efforts, the FBI and its allied agencies are almost certain to have the support of the new president. After the storming of the Capitol, President-elect Joe Biden was harsh in his description of the participants. “Don’t dare call them protesters,” he said. “They were a riotous mob. Insurrectionists. Domestic terrorists. It’s that basic. It’s that simple.”

Biden’s choice of language is interesting because, even before the election, his campaign promised to “work for a domestic terrorism law“—an idea reportedly favored by his close advisors. What a new law would look like isn’t clear, but Biden has a history with such legislation.

After the 9/11 attacks, Biden claimed authorship of the Patriot Act, which has been much criticized for the damage it does to civil liberties in the name of combating foreign terrorism. “I drafted a terrorism bill after the Oklahoma City bombing,” he told The New Republic in October 2001. “And the bill John Ashcroft sent up was my bill.”

The uses to which the Patriot Act has been put since its passage should be warning enough to be wary of any legislation proposed in response to the events of January 6.

“The Patriot Act was the first of many changes to surveillance laws that made it easier for the government to spy on ordinary Americans by expanding the authority to monitor phone and email communications, collect bank and credit reporting records, and track the activity of innocent Americans on the Internet,” the American Civil Liberties Union summarizes. “While most Americans think it was created to catch terrorists, the Patriot Act actually turns regular citizens into suspects.”

“This is really a debate about the standard our government should have to meet in order to obtain personal information about individuals from banks, hospitals, libraries, retail stores, gun shops, and other institutions,” Sen. Ron Wyden (D-Ore.) argued about ongoing controversies surround the Patriot Act in 2011. “Government agents should not be able to collect this sort of information on law abiding American citizens without showing that they have at least some connection to terrorism or other nefarious activities.”

“The government has interpreted a high-profile provision of the Patriot Act as empowering F.B.I. national security investigators to collect logs showing who has visited particular web pages,” Charlie Savage of The New York Times reported just last month. “New tensions have emerged over the extent to which the F.B.I. could use that law to gather logs of people’s web browsing activities, as opposed to using warrants — a tool that requires investigators to first be able to produce evidence that a person probably engaged in wrongdoing,” he added.

Despite much moaning about the absence of a domestic terrorism law, the Patriot Act has had considerable and very intrusive domestic impact on Americans’ privacy.

The fallout from 9/11 also brought us amendments to the Foreign Intelligence Surveillance Act, which authorized mass surveillance campaigns that were exposed by Edward Snowden and ruled unconstitutional only last September. We saw the establishment of the simultaneously creepy and incompetent Department of Homeland Security, and the further transformation of air travel into an ordeal under the groping guidance of the Transportation Security Administration. All of this was presented to a frightened public as part of a necessary response to the attacks in hopes that nobody would notice that the proposals had been gathering dust on shelves, just waiting for an opening.

“Many of the changes have precious little to do with the dangers that we saw on September 11,” George Washington University Law School’s Jonathan Turley told PBS in 2002. “Many of those things are part of a wish list of intelligence agencies that they’ve wanted for decades.”

Given that government officials’ wish list of expanded powers are endless, and that they were calling for new laws well before the storming of the Capitol, we should expect a flurry of legislative proposals in the weeks and months to come. We’ll need to scrutinize them very closely, on the assumption that they’ll be as dangerous to freedom as past schemes to protect us from risks real and imagined.