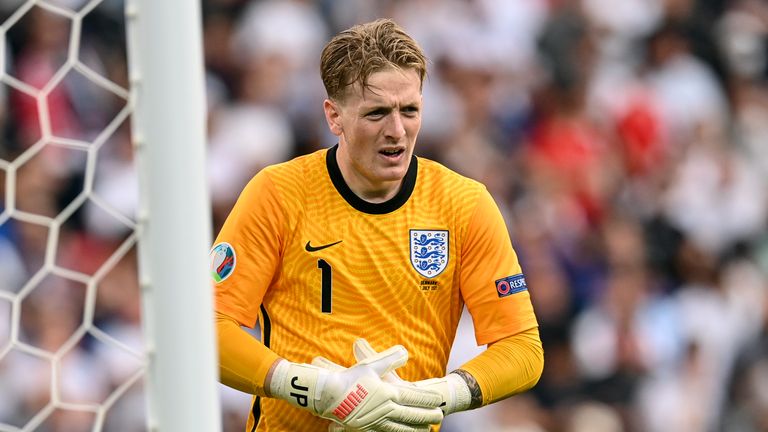 Seemingly surprised by Damsgaard’s excellent free-kick just moments after setting a new England all-time record for the most number of minutes without conceding. Should he have at least got a hand on it? Probably. But note the saves he made – albeit one from an attack deemed offside – in the later stages. 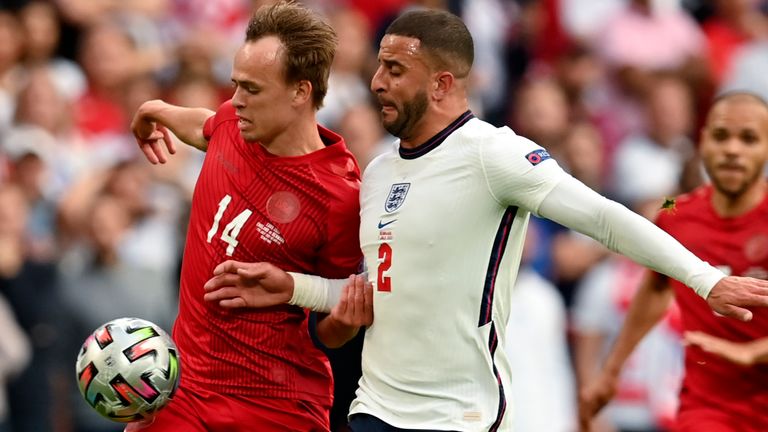 Full marks for the critical covering run and tackle to stop Damsgaard when the Danish forward broke through but unable to offer anything of note going forward and his distribution was erratic. But when England needed experience and clear heads, he didn’t make a mistake.

A tough night but, to his credit, he never really buckled. Fortunate that Walker was so alert on the cover after his Man City team-mate was guilty of drifting out wide and was twice turned far too easily on the edge of England’s box at the start of the second half. But, as with Walker, stood up to the test of nerve and strength. 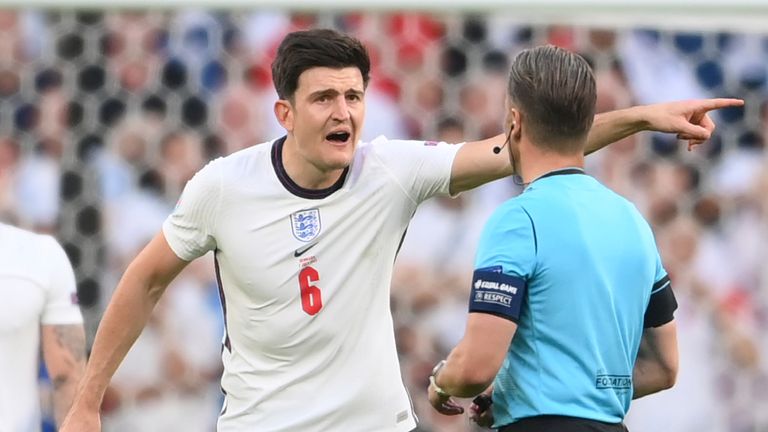 Wins an extra mark simply for the clearing back-post header deep into extra-time when England needed their big men to act just that. Maguire remains a huge figure for England in every sense. Drew a rollicking from Pickford for not offering a distribution route early on but remained far more willing than his partner to carry the ball out of defence. Just about coped when Denmark sought to expose his lack of pace and responded to his very tough booking with a brave header that Schmeichel clawed away.

Appeared to be the player penalised for the free-kick which Damsgaard converted. If so, it was harsh in the extreme. Had shown up well in the first 20 minutes but attacking threat faded thereafter although, once again, there were a couple of sudden, well-timed surges which has become his tournament trademark to almost open the stubborn Danes.

Much improved after the break when he became far more aggressive in fighting for possession and far more assertive and positive with his own distribution. It had been a different story in the opening 45 minutes when he failed to provide steady protection in front of the back four and frequently operated too close to Maguire and Stones when England played ponderously out from the back. 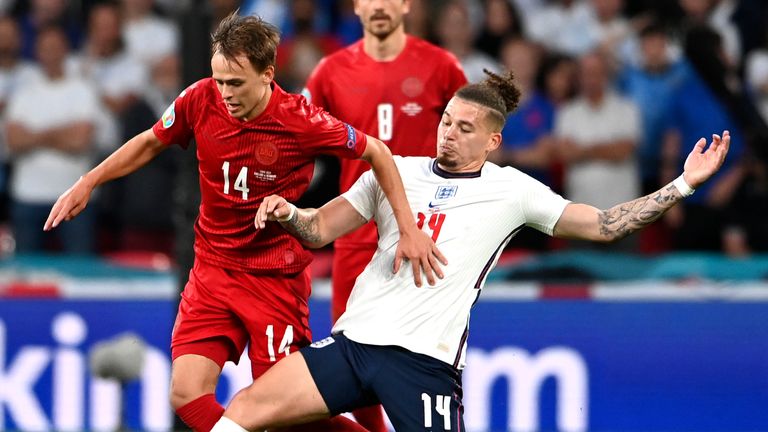 This lad has incredible character. Like Rice, better the longer the game went on – although it would be an exaggeration to say England had charge of the midfield. England’s most difficult period of the tournament had come in the first 30 minutes when Phillips was unable to provide any sort of positive influence as the Danes grew in strength. But it says everything about his resolve and tenacity that Phillips was still on the pitch for the full-time whistle.

Started brightly as England held early sway but then rather lost his way and influence. Flitted in and out of the game as England took charge in the second half but Mount never quite looked as if he would be the one to unlock the door. 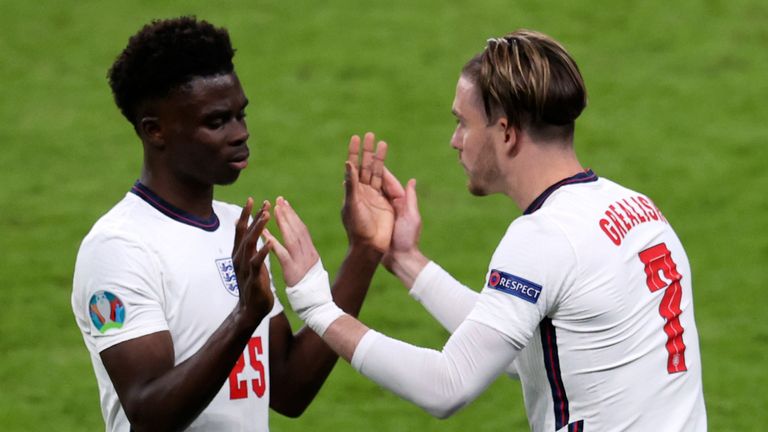 Made things happen. Was willing to take possession even when heavily out-numbered and under pressure but it was his ability to run past his man that was critical in opening up the Danes for England’s equaliser. Unfortunate to be hooked after 70 minutes given his prominence as England worked their way on top and the change didn’t really work as Sterling, until the penalty award, lost some of his fizz after switching to the right flank which Saka had occupied. Did he fall or was he pushed? If there was a touch of luck around the penalty award, there was no surprise that it was Sterling who provided England’s cutting edge when they needed it most. Adamant afterwards that he was fouled and he would know better than anyone.

Should have done better with an early effort scuffed at Schmeichel when England appeared to be making a bright start and then hammered an even better chance straight at the Denmark goalkeeper when England were wobbling. Fortunately, an unmissable opportunity turned up moments later – even if it was turned in by Kjaer ahead of the England forward. 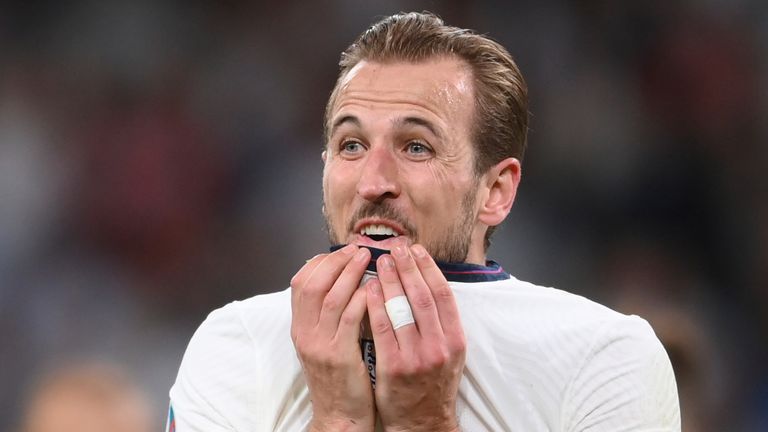 What a couple of seconds: The worst penalty of his career followed by England’s best moment in over 50 years.

Had gone close in the final seconds of normal time and then demanded a smart save from Schmeichel at the start of extra-time as the England captain delivered his best display of the tournament.

There was simply no comparison with his performance three weeks ago against Scotland with Kane heavily involved in the majority of England’s best moments and their most creative influence. Delicious cross for Sterling on the run was mere inches overhit, then set up Sterling for the chance blasted straight into Schmeichel’s midriff and then provided the perfect through-ball for Saka to set up England’s leveller.

So very, very close to setting up Kane in the final minute of added-on time of the 90 and then called Schmeichel into action with a rasping shot on goal. Did enough to justify replacing Saka, but the feeling persisted that England are better when Sterling can play on the left, and the substitute was then himself subbed when Southgate opted to switch to five at the back.

Couldn’t quite get a grip of the game after replacing Mount.

A positive presence after taking Rice’s place in midfield and doing his bit to maintain England’s supremacy.

Smart and sensible as Southgate turned to his trusted lieutenant for the final 15 minutes of extra-time. It will be an easily-forgotten detail of the evening, but England’s game management in that final period was exemplary.

Deserved to be on the winning team. Spread – Schmeichel-like – to keep his team 1-0 up as Sterling met Kane’s cross. A stupendous save, but England levelled moments later. Showed why he is one of the best in the Premier League as his fingertips denied Maguire and was alert to deny Kane’s low strike in extra-time.

Guessed right to keep out the Tottenham’s striker’s penalty only to be beaten on the rebound. Ended with another exceptional save to stop Sterling.

Part of a very deep Denmark wall and was courageous throughout. Was alert to the danger to bring an end to one marauding Mount run, and stole the ball off the Chelsea man on another occasion to bring greater tension to the vast majority inside Wembley. Won almost everything in the air against Kane, and one snipe on the ground led to Damsgaard nearly finding the opener. 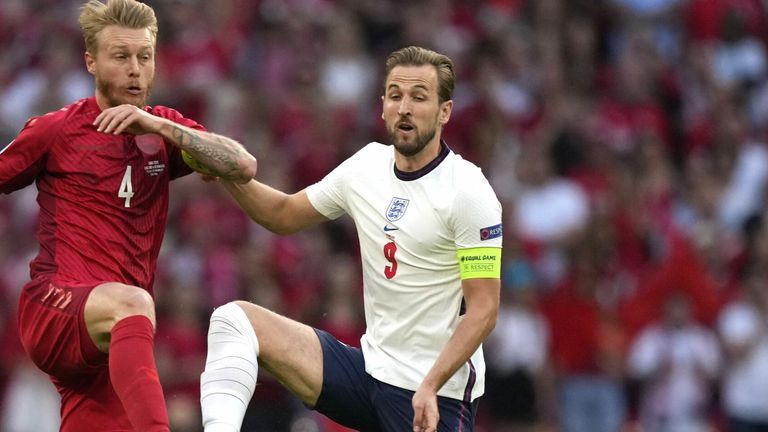 Nervous start as a slack clearance was very nearly compounded by a back pass that was waved on by referee Danny Makkelie inside three minutes. Gained control to organise Denmark’s defence and limit England’s set piece threat, but could do little to prevent his own goal.

Recovered from a nasty head collision with Maguire but afforded Kane too much space for the first chance of extra-time. Gave his all as he slumped to his haunches in a breathless additional 30 minutes.

Enjoyed renewing his battle with Sterling having faced each other in the Champions League final, but didn’t get tight enough to the Manchester City forward as he allowed him to cut onto his right foot for a tame shot on 13 minutes. Stuck to his task despite visibly tiring in the second period before hobbling off. 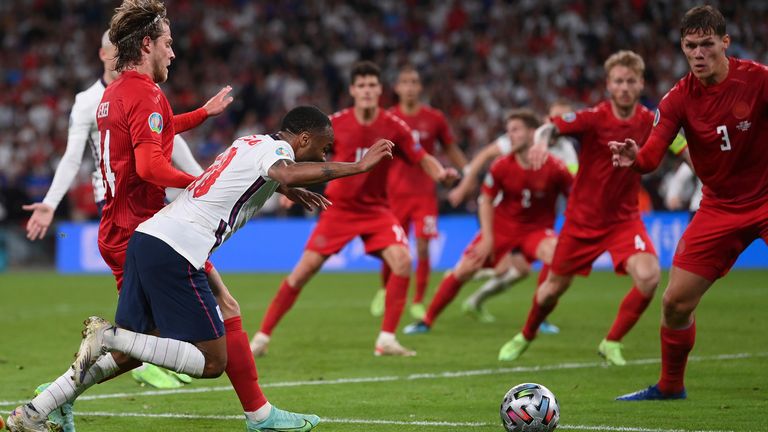 Caught horribly out of position as Kane filled space he vacated down the left to cross agonisingly in front of Sterling early on. Got very little out of Walker going in the other direction, and was forced into drastic action to drag down Saka midway through the first half. Mopped up well at other times, but it was down his channel that England clawed themselves back into the game.

Improved after the interval to pick out Dolberg, albeit in an offside position, but a lazy foul on Kane very nearly proved costly as Schmeichel brilliantly kept out Maguire’s effort from the free-kick. Was fixing his boots when England took another quick re-start.

Was it a penalty? The contact was marginal. Was it a clear and obvious error? Schmeichel was close to coming to his rescue, but Kane buried his rebound. Fought to make amends with a teasing cross but fell short. 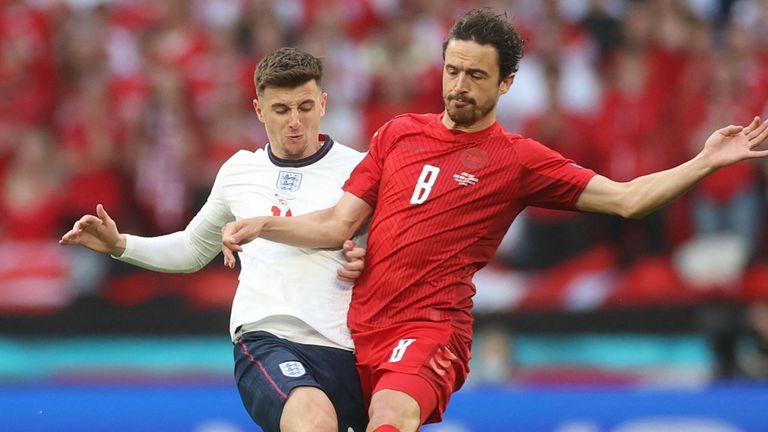 Caught the wrong side of Sterling within 20 seconds to be penalised for his first foul. Didn’t give Phillips any peace and settled into a tidy performance when in possession. Late on Kane to concede a set piece 25 yards from goal, and somehow avoided being booked. Tired and was replaced on 88 minutes.

Composed on the ball and provided a lovely pass for Damsgaard as the third man running in Denmark’s first meaningful attack. Aggressive on Sterling when locked in battle down his side. Took ownership on indirect set pieces, but stepped aside for Damsgaard’s moment of magic.

Denmark’s engine room was tasked with keeping Mount quiet and rose to the occasion. Burgled the ball off Phillips to bring a routine save off Pickford. So often in the right place to read the danger for his side as the door was slammed shut on Grealish.

Entered the game with three tournament goals to his name, and was economic in his involvement in the opening stages. Came alive on 28 minutes as he exquisitely rolled Rice and brought a cynical foul off Mount. Dropped off cutely to cause Maguire problems in another inventive display as a reverse shot was too close to Pickford. 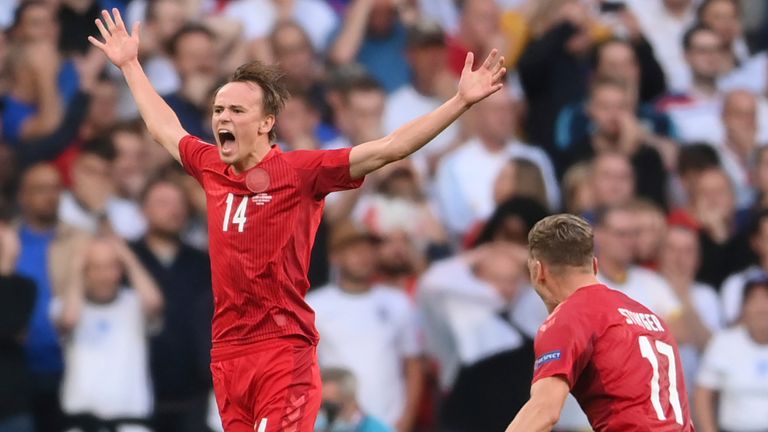 Danish dynamite. Was brushed off the ball too easily by the recovering Walker as England’s high line looked to have been breached in the 10th minute.

Nearly capitalised on Pickford’s rush of blood to the head as he intercepted his bowl-out and came within inches of scoring with a devilish curled effort that bent just wide. Stunning free-kick – the first of the tournament – to take Pickford by surprise. Withdrawn midway through second half.

Cut an isolated figure but wasn’t afraid of coming deep to try threading killer pass to onrushing runners. Full of energy as he sparked a counter-attack from England’s own corner after 37 minutes. Intelligent use of the ball as he drew a flying punched clearance from Pickford, and showed constant awareness of his team-mates.

Very nearly flashed in an instinctive equaliser in extra-time drawing the save from Pickford.

Replaced Damsgaard on 67 minutes to pose another problem. Showed fine hold-up play up against Stones, stretching England’s defence and looking to exploit space in behind. Fortunate not to see yellow as he sought an early shirt swap with Maguire. 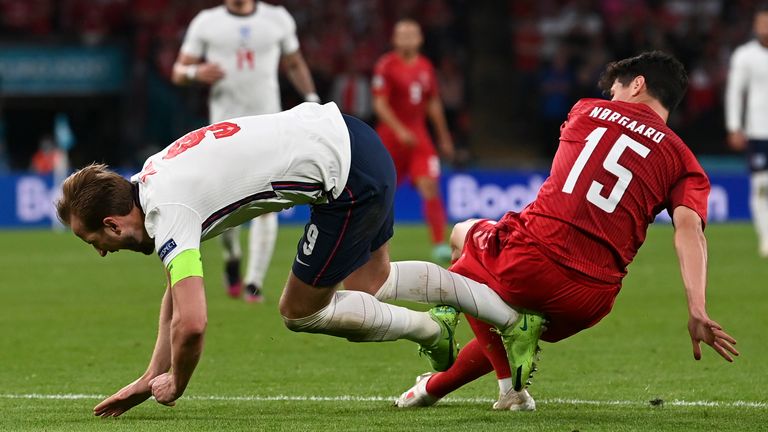 Replaced Dolberg on 67 minutes to stiffen up the central area. Tangled with Kane in the penalty area but the decision went Denmark’s way for an earlier foul. Struggled a little with the tempo.

Replaced Christensen on 79 minutes as Denmark were forced to re-jig their backline.

Replaced Delaney on 88 minutes. Sucked in too easily for a wayward Sterling chance in extra-time and was forced off through injury in extra-time as Denmark finished the game with 10 men.