For the first time in its 25-year history, the internationally acclaimed fashion event — Australian Fashion Week — opened with a 65,000-year-old custom: a Welcome to Country and smoking ceremony by the Gadigal people.

It was made even more special by a performance by the Muggera dance troupe and First Nations Fashion and Design (FNFD) all-Indigenous fashion showcase curated by Cairns-based Meriam Mer woman Grace Lillian Lee.

“Our team is standing on the shoulders of many that have gone before us in building up the industry,” Ms Lee, founder of Indigenous advocacy group First Nations Fashion and Design (FNFD), said.

“It’s a very momentous occasion for us as First Nations people to be really hitting the ground and showcasing how beautiful and rich our country is not only through our textiles but also through our beautiful models.” These Far North Queensland women were proud to be walking together, sharing their culture on the national stage with Indigenous designers from across the country Clair Helen, NGARRU MIIMI, Amber Days, AARLI and Nungala Creative.

In another first, FNFD was the first Indigenous runway, led by Aboriginal and Torres Strait Islander people and starring an all-Indigenous cast at Australian Fashion Week.

“In regards to the Australian Fashion narrative, First Nations people and our country have been a great source of inspiration,” Ms Lee said.

“It’s time for us to take ownership of that and actually be a part of that conversation … create more economic opportunities for our own people so we can grow as an industry.”

“We’ve always been a part of other festivals and not really had a main-stage platform where we could really voice and celebrate who we are,” Ms Lee said.

“We’re here now and we’re so excited to be launching and sharing self-determined, independent, Indigenous designers.” Ms Lee uses a traditional grasshopper weaving technique in a contemporary form to create her designs that she learned from esteemed artist and mentor Erub man Ken Thaiday.

One of the designs Ms Lee created for Australian Fashion Week is inspired by the eucalypt, as part of a commissioned exhibition Eucalyptusdom of First Nations artists at the Powerhouse Museum in Sydney.

“My grandmother talks about where we all come from the same root and that we are all many branches of that tree,” Ms Lee said.

“I just wanted to show the complexities, but that we are all united together in this one piece and come from this same great, great-grandmother.” Fashions with a story attached

“I only design in black because it reflects who I am as an Aboriginal woman,” she said.

Ms Creed has showcased at various Fashion Week runways and was most recently the first Australian to be selected as one of 10 designers globally to take to the stage at Milan Fashion Week at the Emerging Talents stage.

“I didn’t expect to go there, not in my wildest dreams, that was just like for somebody else, I never had a thought that I would be there,” she said.

“Indigenous designers and fashion, we’re starting to be seen on a lot of the runways … not just in Australia but around the world.

“I think what we bring with us in our fashion … is that most of our designs would have a story attached to them.”

Ms Creed’s story is both sobering and humbling as she explains how she recycles garments from op-shops — a skill born out of poverty.

As a child, her family would spend a lot of time in op-shops and eventually it became a treat to shop the discarded garments that she began to collect. “With the collecting of the clothes, pulling them apart and putting them back together again … I refer to my way of doing things as assimilated fashion,” she said.

“It reminds me of when they moved us all around and split up our families and then, under that assimilation process, tried to make a new us.

“Assimilation is not a word that we like to use … in terms of my design it’s taking that negative and recreating.”

Ms Creed’s design depicts eucalyptus trees and how they were affected in the bushfires and is also part of the Eucalyptusdom exhibition. Briana Enoch is a Kaantju and Quandamooka woman and founder of Jawawee, a design label that started out as handpainted accessories.

In September 2020, Ms Enoch decided to follow her dream and release a high-end clothing collection, and it was not long after that she got the call form Ms Lee to join the First Nations Fashion and Design runway at Australian Fashion Week.

“I was really excited to hear that she wanted us to be a part of a special Welcome to Country at the Afterpay Australian Fashion Week and I designed my first couture dress,” she said.

“I’m so excited to see it on the runway.

“It’s a foot in the door. It’s really great to see our mob getting on the highest platform here in Australian fashion.” The dress premiered at Australian Fashion Week and will now exhibit at the Powerhouse Museum for a year, telling a story about how her people used the eucalyptus.

Ms Enoch explained the many uses including using leaves to whack away mosquitoes, for medicinal purposes, and traditional cultural practices like smoking ceremonies.

“Our people were really big on making sure that we had plenty of eucalyptus trees on the island [Stradbroke Island in south-east Queensland],” she said.

“It’s amazing how our old people have told us stories and they pass that on and we can infuse that into different mediums of the fashion.” 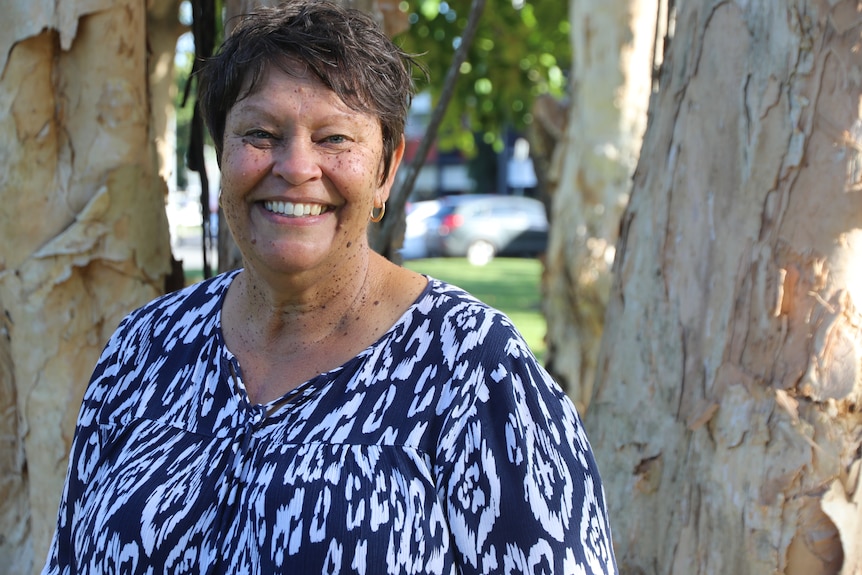 ‘Everybody needs to come together as one’

Lynelle Flynders has been part of the FNFD movement since it began in 2013, when she first met Ms Lee at a textile symposium at the Cairns Indigenous Art Fair.

“So this platform (FNFD) was starting out,” she said.

“How do you see fashion from an Indigenous perspective?”

Ms Flynders is an art teacher, but with encouragement from Ms Lee entered the fashion space and has since founded her label Sown In Time.

When she designs a garment, she imagines it on her daughter and if she cannot imagine it on her she will not do it.

“I’ve had to do a lot of research, people don’t get to where they are overnight,” Ms Flynders said.

“It’s a lot of research and practice, a lot of swearing and throwing things away, stuff like that.” For her collection that took to that stage at Australian Fashion week, the fabrics were all handpainted making every inch of the design unique.

Ms Flynders does not think of herself as a fashion designer, but is drawn to the FNFD movement and wants to keep going and bring as many mobs along as possible.

“When you’re in one of Grace’s performances, you’re family, you’re one and everybody needs to come together as one and go forward and that’s what makes it beautiful.” 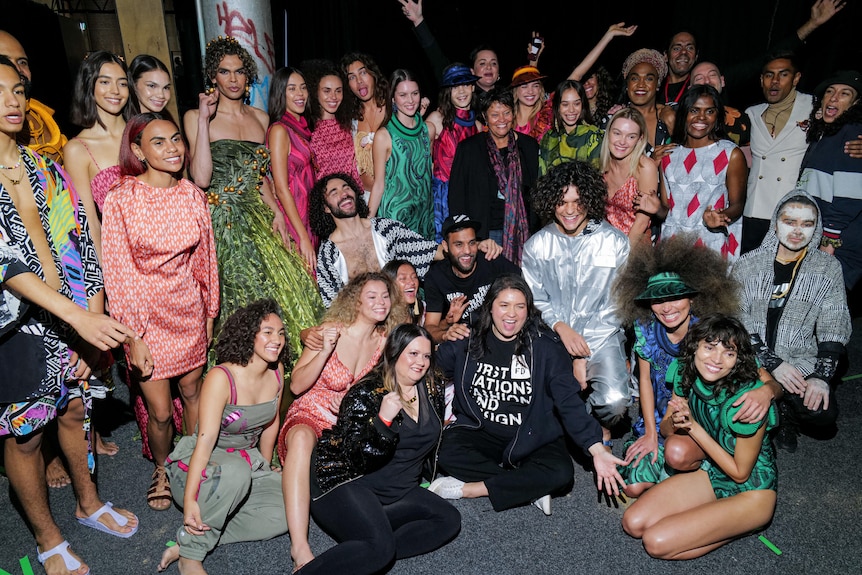