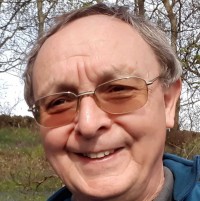 John Wilson, left, was presented with the NCTJ Chairman’s award for 2019 – the training body’s top honour – at its annual journalism skills conference in Sunderland.

The former Dewsbury Reporter editor retired in June after 37 years with JPIMedia and its predecessor companies, but continues to work with the NCTJ as a senior examiner and training consultant.

He received the award from NCTJ chairman Kim Fletcher at the Awards for Excellence ceremony at the Stadium of Light.

Said Kim: “John is a gifted trainer and outstanding communicator who is held in the highest esteem by all those who have worked and trained with him.

“Generous, modest, warm-hearted, patient, passionate about his craft and his beliefs, and universally regarded as a true gentleman and a genuinely lovely man, John is a fountain of knowledge and renowned for his professionalism and calmness.”

John left school in 1973 to join his hometown newspaper, The Dewsbury Reporter, as a trainee. The NCTJ archive confirms he did his preliminary exams training at Darlington College before passing his Proficiency Test at the Bradford exam centre.

He went on to work for the Yorkshire Evening Post, Yorkshire Post, Huddersfield Examiner and Halifax Courier before returning to Dewsbury as editor-in-chief.

He became group editorial trainer for Johnston Press in 2006 and editorial learning and development manager in 2015, training hundreds of journalists across the business.

Added Kim:  “A brilliant trainer and one of the nicest and most knowledgeable journalists you could ever wish to meet, we are delighted to acknowledge with this award the outstanding contribution John Wilson has made to the training of so many journalists.”

The awards evening also saw the presentation of the annual Awards for Excellence to the outstanding student, trainee and apprentice journalists from the past 12 months.

The ceremony, which took place at the Stadium of Light in Sunderland, was hosted by Dharmesh Sheth, Sky Sports News presenter.

He said: “I’m honoured to be among such a group of talented people, inspired that I know the future of journalism is in such good hands, and envious of the amazing journey you have ahead of you.

“You have the best head start on anyone else, you have this most amazing qualification from the NCTJ.”

The categories include news, sports, features, top scoop, multimedia story/campaign for both students and trainees, along with student project of the year.

Performance awards were also given to the best-performing apprentice, student and trainee journalists in the 2018-19 academic year.

Student journalist of the year – Jessica Murray, University of Sheffield

Apprentice of the year – Yohannes Lowe, The Telegraph/PA Training

Satwik-Chirag beat the huge ‘Dads’, get in quarterfinals at Paris|Sports Information, The Indian Express