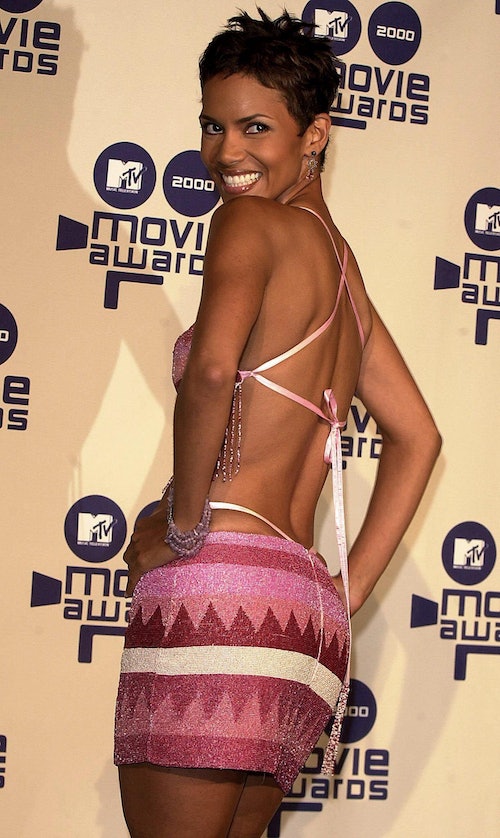 From roles in blockbuster films like the X-Men series to Die Another Day and Gothika, Halle Berry not only made her mark in Hollywood, but when it comes to fashion, the award-winning actress was a force to be reckoned with both on and off the screen.

After making her debut in the early ‘90s in the hit rom-com film Boomerang, Berry became a breakout star in the movie industry, and her style, especially throughout the early 2000s, was a must-see on the red carpet. Throughout the early aughts, she experimented with bold and fun silhouettes, and you could always expect to be blown away even in a casual look. Looking back, the actress is remembered for embodying all of the best trends from the noughties, often seen rocking micro-mini skirts, halter tops, strappy bikini tops, and her go-to gradient sunglasses.

See some of our favorite looks from Halle Berry in the early 2000s, ahead. 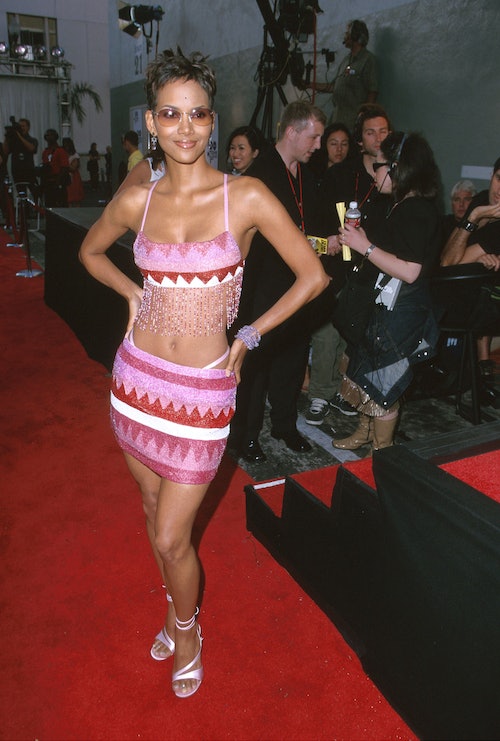 Back in 2000, the actress attended the MTV Movie Awards in a sequin two-piece set and metallic sandals along with gradient frames, beaded fringe, and an exposed thong. 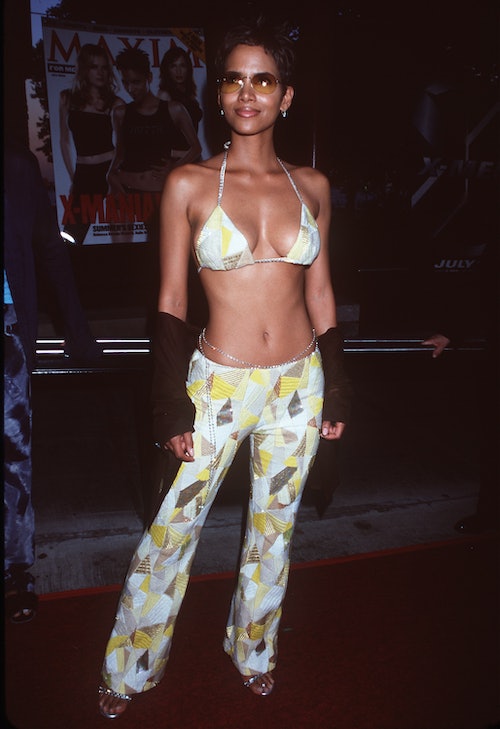 At the premiere of X-Men, Berry wore a patterned bikini top and matching pants with a brown cardigan, a dazzling belly chain, her signature gradient shades, and metallic heels. 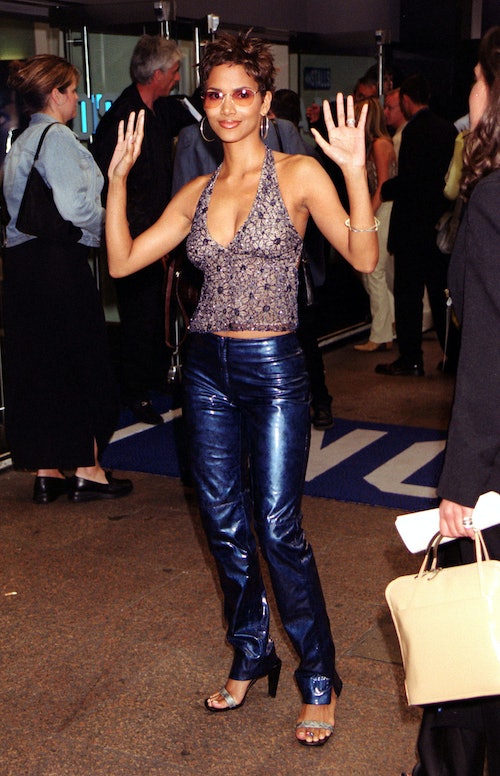 During the X-Men tour in London, Berry appeared in a halter top with dark blue patent leather pants. She completed her outfit with heels, gradient frames, and hoop earrings. 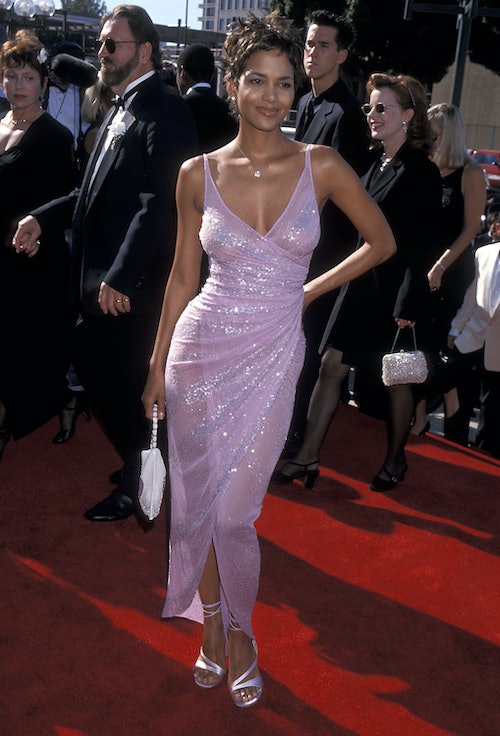 The actress donned a sparkly lilac dress with metallic heels and a white mini bag to the 2000 Emmy Awards. 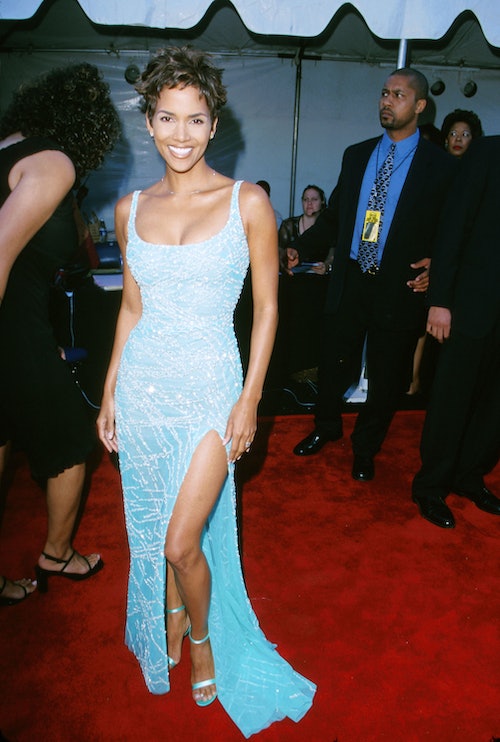 Wearing a baby blue gown embellished with beads and a slit at the leg, along with matching blue metallic heels, to the 2000 Soul Train “Lady of Soul” Awards. 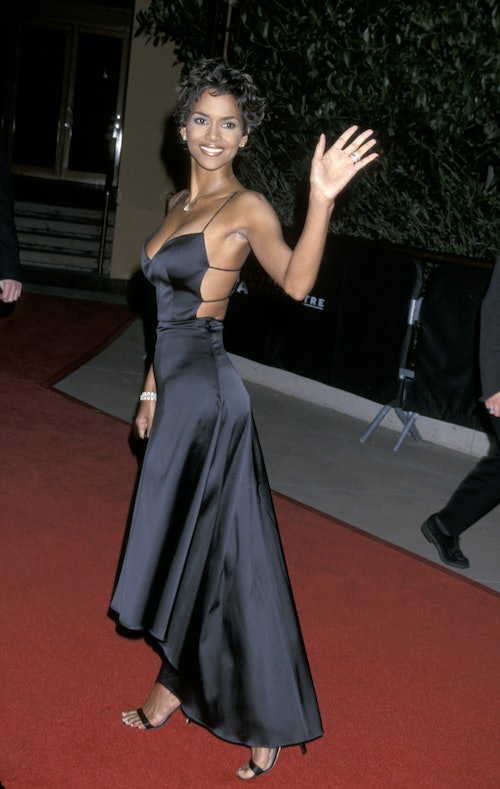 Berry wore a black strappy dress with an exposed back and black heels to the 2001 NAACP Image Awards. 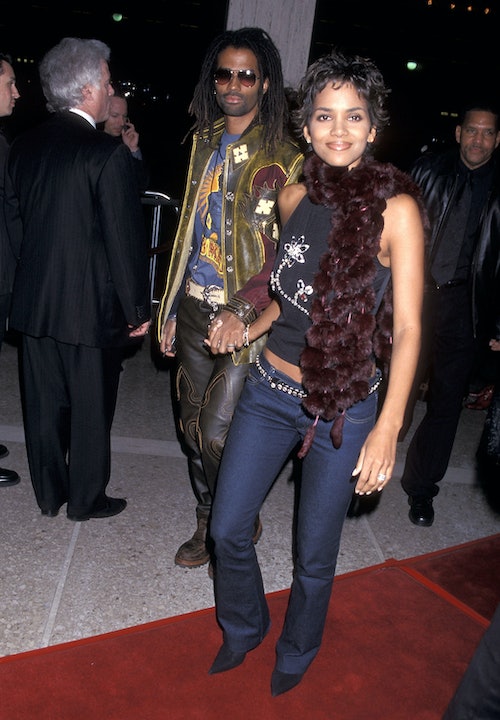 Berry was seen with her then-husband Eric Benet at The Brothers premiere back in 2001 wearing a black embellished tank with low-rise jeans and black pointed shoes. She accessorized with a fuzzy scarf and chain belt. 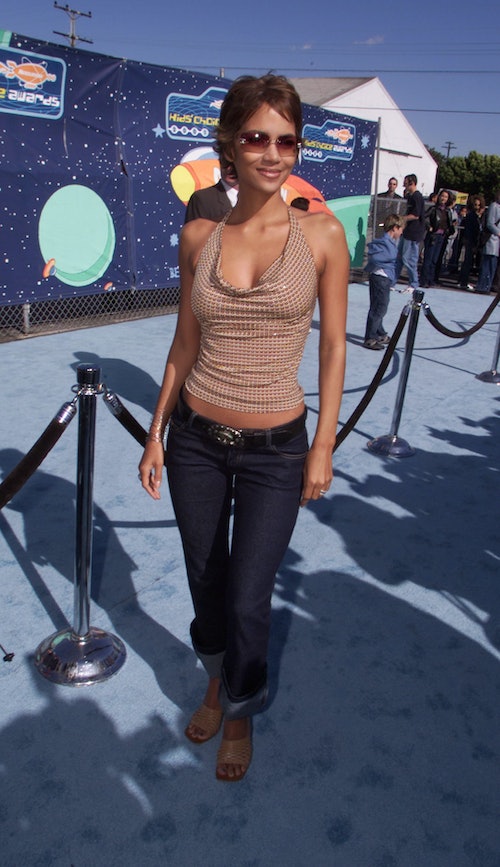 The actress rocked a brown halter top with low-rise jeans cuffed at the ankle, neutral-hued sandals, and gradient sunglasses to the 2001 Kids’ Choice Awards. 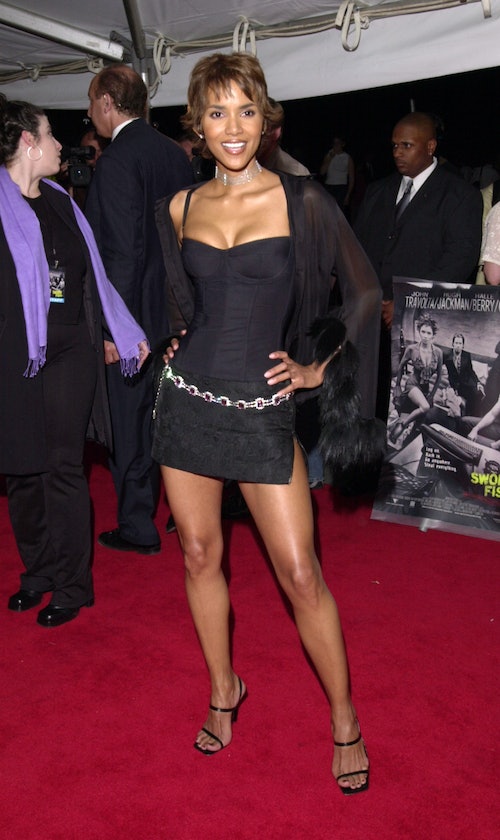 The actress rocked the micro-mini trend in a strapless corseted top, black skirt, and square-toed heels. She accessorized her ensemble with a jeweled belt, choker necklace, and sheer shawl jacket adorned with fur sleeves. 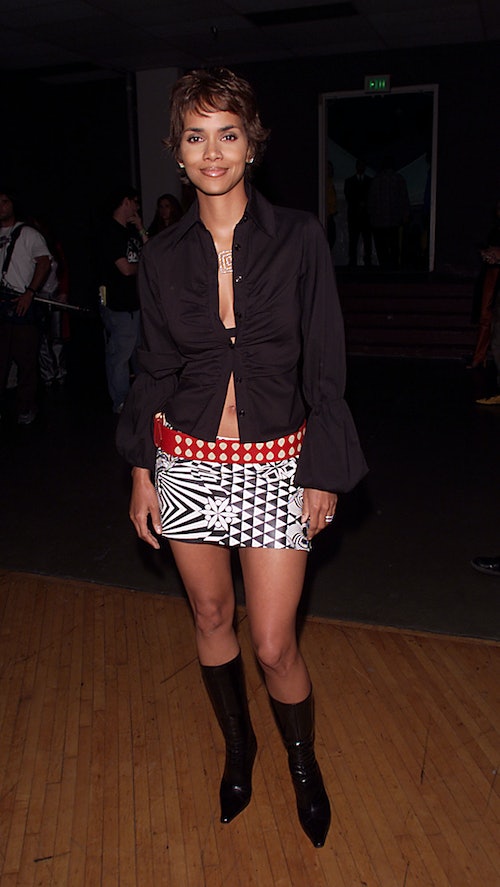 The ultra-mini skirt also made an appearance on Berry backstage at the 2001 MTV Movie Awards, along with a button-up blouse and black boots. 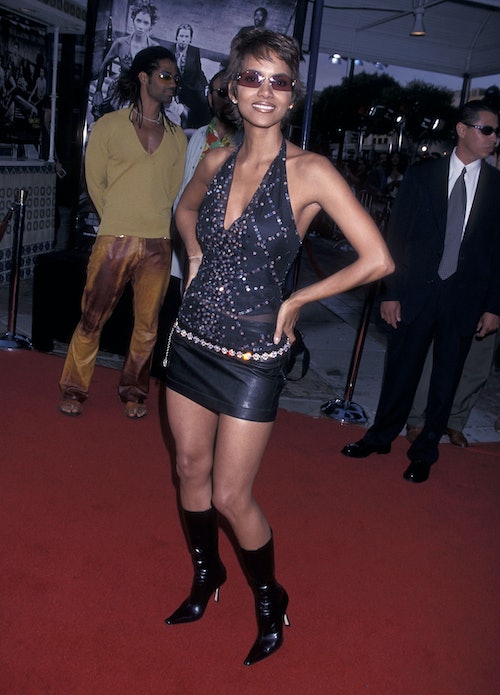 Wearing a bedazzled halter top with a black mini skirt and pointed black boots with tinted sunglasses for the finishing touch. 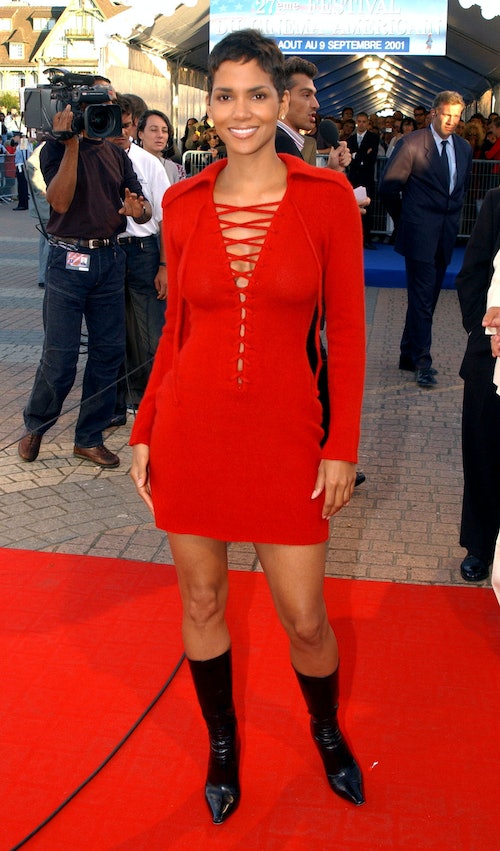 Berry posed on the red carpet for Swordfish in a lace-up red mini dress paired with black boots.

During the London premiere of Chitty Chitty Bang Bang in 2002, the actress was seen in a white button-up top paired with black trousers featuring mesh cutout detailing. She also wore a leather jacket trimmed with fur and black boots. 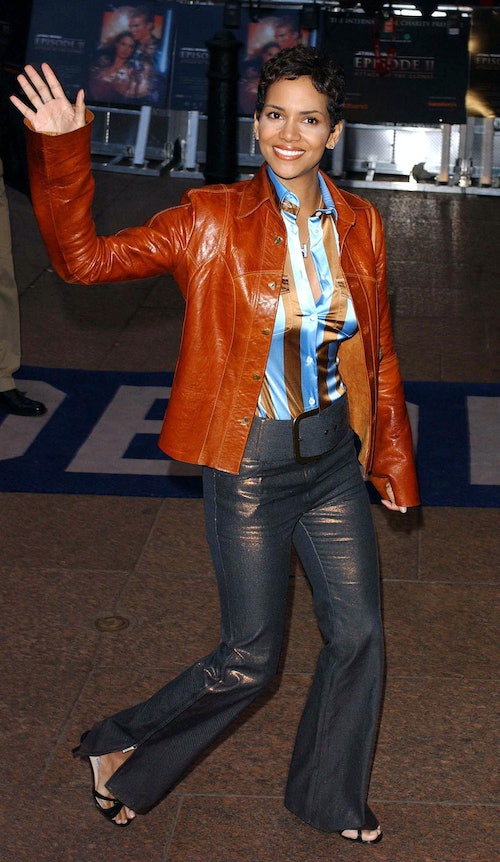 Wearing a striped silk blouse with a red leather jacket and ankle-slit pants to the Star Wars premiere in London. She completed her look with black sandals. 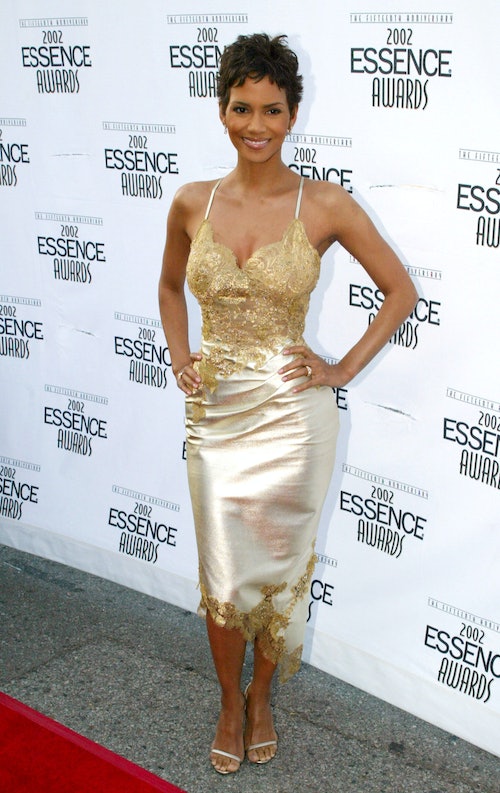 Wearing a golden satin-and-lace dress with white heels to the 2002 Essence Awards. 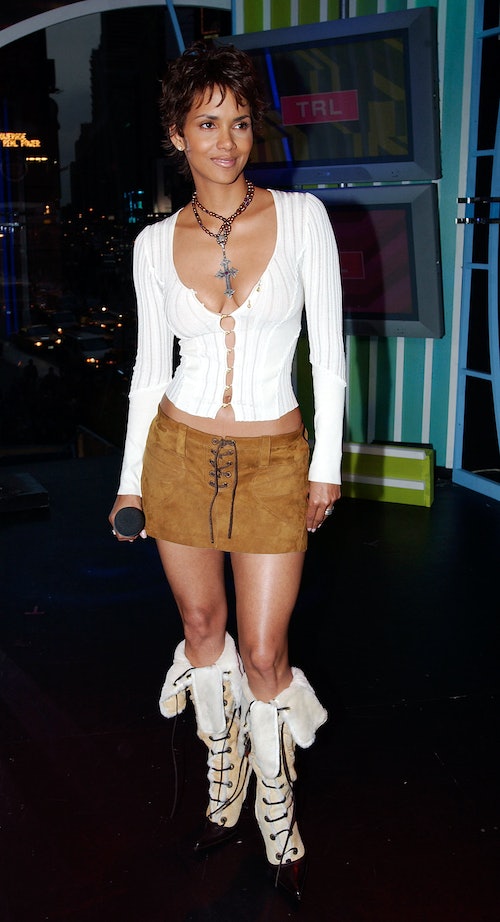 Berry appeared as a surprise guest on MTV’s TRL in 2002, rocking a buttoned white cardigan with a low-rise suede micro-mini skirt and lace-up fur-lined boots. 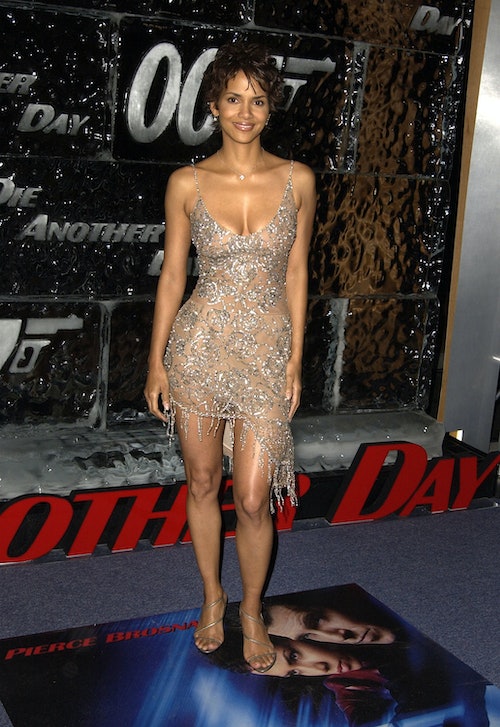 The actress dazzled in a sparkly crystal-embellished mini dress and metallic sandals at the premiere of Die Another Day in Los Angeles. 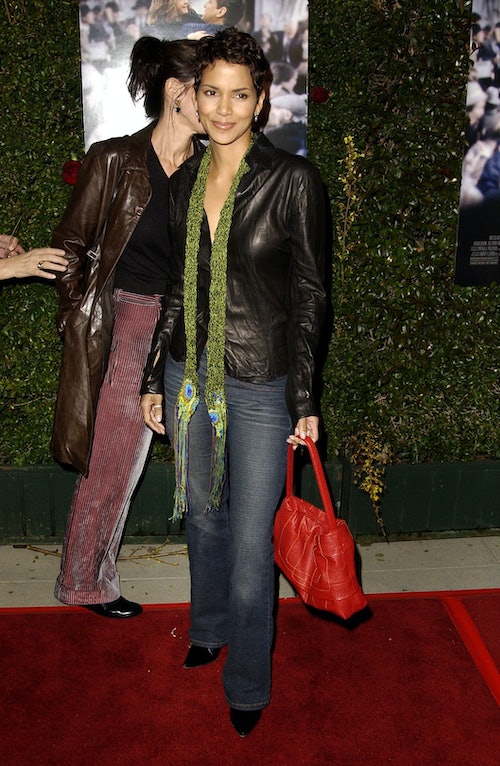 Wearing a black leather top with denim jeans and a green skinny scarf to the 2002 Evelyn premiere in Los Angeles. She completed her look with a red handbag and black boots. 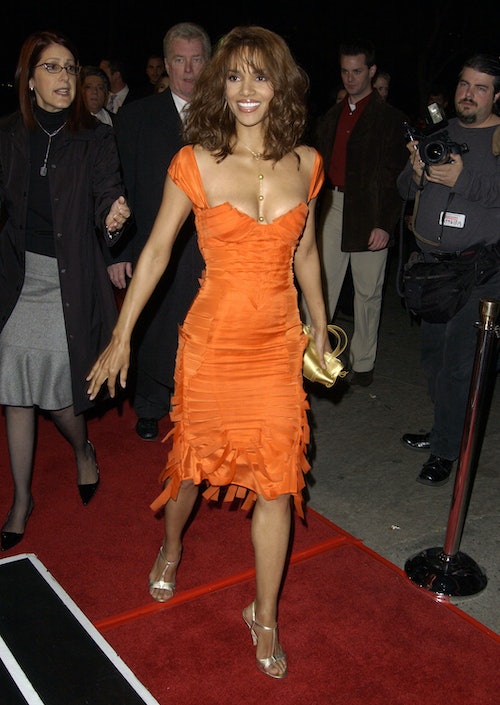 In 2003, the actress attended the Gothika premiere in an orange ruched ensemble with metallic heels and a gold clutch. 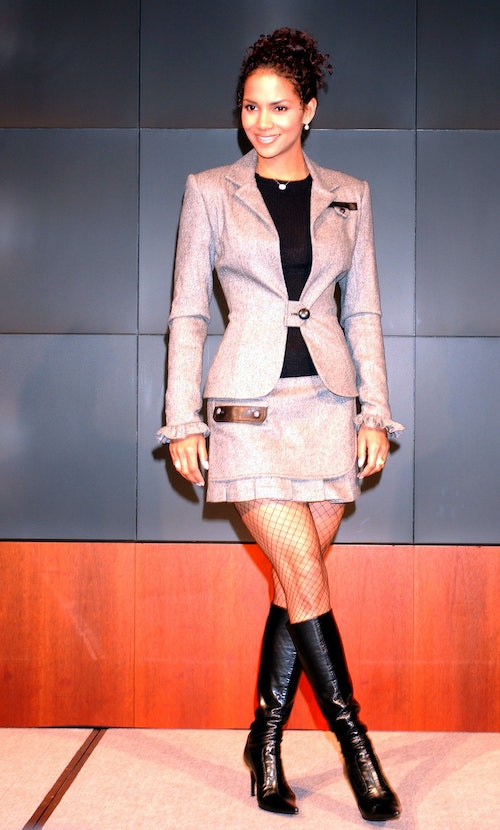 Berry stunned in a gray blazer and micro-mini skirt set, with a black top underneath, fishnets, and black boots to the 2004 Gothika press conference in Tokyo.

2004, The Late Show with David Letterman 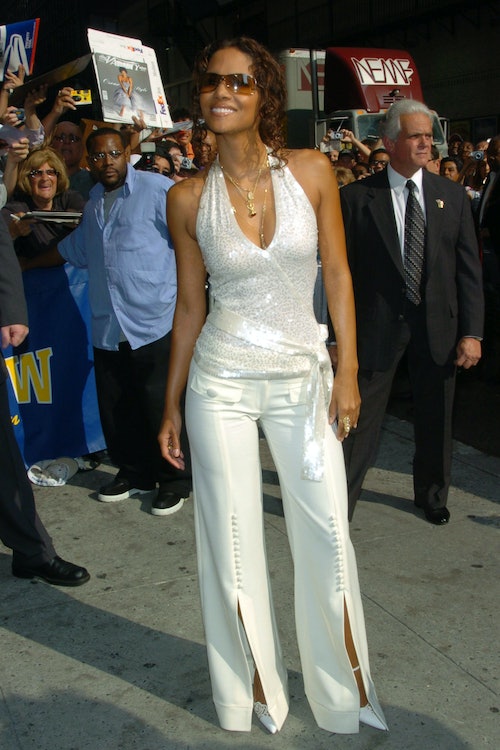 In 2004, Berry was seen arriving for The Late Show with David Letterman in a sparkly halter top with open-slit white pants, along with pointed white heels and gradient sunglasses. 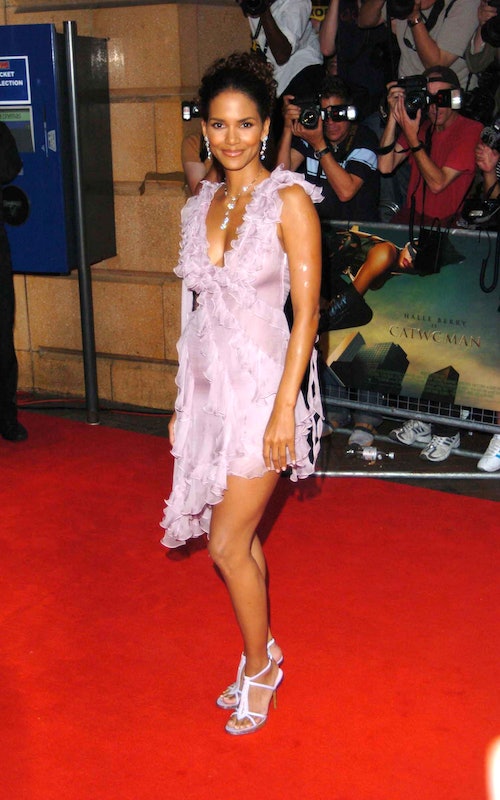 The actress shined at the Catwoman premiere in a ruffled lilac ensemble with a pair of matching heels, a charm necklace, and dangling earrings.

The actress was also a street style star. In an off-duty photo taken in 2004, Berry was spotted wearing all white, including a baby tee, baggy pants, and a brown belt at the waist. With a Chloé bag and cell phone in hand, she finished her outfit with gradient frames and black flip-flops.