Jurgen Klopp and the Sky Sports pundits were left perplexed after Harry Kane’s tackle was not upgraded to a red card before a later challenge saw Andrew Robertson sent off in Liverpool’s 2-2 draw at Tottenham.

Robertson was on the receiving end of Kane’s studs-up challenge in the first half, but after a quick check play continued with the Spurs striker receiving just a yellow card.

In a breathless match on Super Sunday, Robertson then put Liverpool 2-1 up in the second half, but just three minutes after Heung-Min Son’s equaliser he saw red for kicking through Emerson Royal.

VAR instructed referee Paul Tierney to review Robertson’s challenge, and Klopp could not understand why there was no intervention for the earlier tackle from Kane, which the Liverpool boss claimed could have been a leg-breaker.

Klopp: Where was VAR?

Jurgen Klopp, who was shown a yellow card by Tierney in the first half for his protests, was left puzzled by the lack of VAR intervention, and inferred the referee may have an issue with him.

“I have no problems with referees – only you,” Klopp was overheard saying to Tierney after the game.

The Liverpool boss told Sky Sports: “There were obviously many other things that were influential in this game, but some of these questions are better to ask Mr Tierney.”

Asked if Kane’s punishment should have been stronger, Klopp said: “Definitely, stronger. We can give Robbo a red card, it’s not the smartest challenge of his life. But that’s definitely a red card, no doubt about it. So we have a VAR sitting there, and he has a look again at the Robbo situation. Fine, that’s what he’s there for. What did he do in the Kane situation?

“And the penalty situation with Diogo Jota. Mr Tierney told me he thinks Diogo stops on purpose because he wants the foul. If you want to shoot you have to stop because you cannot run and shoot at the same moment. It is always helpful if you have played football yourself in the past. When you see the situation back, where is he stopping? I don’t understand that.

“But it is OK, the draw is OK, we are not that crazy that we think we cannot draw at Spurs, but these are crucial, decisive situations. It’s a great pass from Naby Keita and then someone finished the situation off in a not really football, legal way. And the ref and the VAR doesn’t say a word. I really have no idea what is his problem with me. Honestly, I have no idea.”

Klopp also said in his post-match press conference: “We can accept Robertson’s sending off. This is the proof the VAR was there today, because before that we thought he might not be in his office. Because the two other situations, Harry Kane should have seen a red card and he didn’t.

“It was a very quick decision from the referee, I’m not sure if he was prepared for it, how can you know that quick? Wow. That’s obviously two wrong decisions of him, and one right [Robertson’s red], all three against us.

“I have no idea why. You have to ask the VAR. That’s an absolutely clear 100 per cent red card. Sometimes you cannot see it clearly or whatever, but in this situation, if Robertson’s foot is still on the ground, his leg is broken. The ref saw it different.” 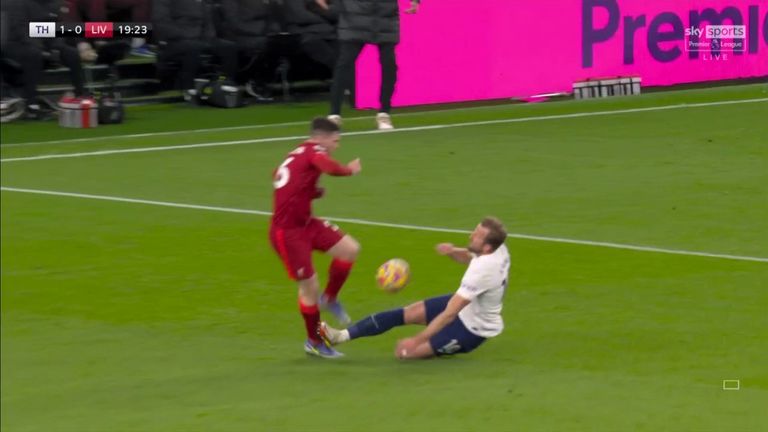 Sky Sports’ Jamie Carragher described the foul on Jota as “a blatant penalty” and agreed with fellow pundit Jamie Redknapp that Kane “should have been sent off”.

Carragher said: “Last season, it was almost as if people were getting a penalty for a little touch on the ankle and saying ‘contact’. We have come away from that thankfully but we are now at the stage where you are almost thinking ‘what is the point of VAR?’. People complain about VAR but it [the problem] is who is controlling VAR.

“‘Clear and obvious’ has become a real problem. They are saying they don’t want VAR to referee games. But that is just going back 10 years when there was no VAR. The whole point of VAR is to help referees in certain situations when they get big decisions wrong – and that was a big one.”

Reviewing the foul on Jota, Redknapp complained: “It is a horrendous decision. He is barged over. It is such a bad decision, it is a joke decision.”

Redknapp was equally insistent Kane should have been dismissed for his foul on Robertson.

“It was reckless and out of control,” said Redknapp. “It was a red card. If Robertson’s leg was on the floor, Kane could have snapped his leg.

“Sometimes a reputation, being the England captain, can help you. I think that helped a lot. He was over the top of the ball, it was high and he was lucky.”

Kane was shown a yellow card for the tackle with VAR declining to advise Tierney to review his decision.

“What l don’t understand is the terminology being used,” added Carragher. “The one thing you could say [in Kane’s defence] is that he caught him just above the boot. But the actual VAR terminology was ‘speed and intensity’. But Kane was sprinting at the ball and lunging! He couldn’t have been any slower, so that was a nonsense.”

Kane: It wasn’t a red card

Kane, meanwhile, denied he deserved to be sent off and claimed he got the ball in his tackle on Robertson.

Asked if he was worried he would be sent off, Kane told Sky Sports: “No, definitely not. I thought it was a strong tackle but I won the ball, although I’ve not seen it back.

“When you are playing against top sides and fighting for points, there are going to be strong tackles. They checked it and it stayed as a yellow card and we move on.

“It didn’t feel like it [a red card] and Andy Robertson said I just caught his foot. When you slow stuff down in football it makes it look worse than what it is. But that’s why VAR is there.”

Conte: I didn’t see it… but Salah handled

“I haven’t seen the Robertson situation with Kane. I haven’t seen the possibility of a penalty. My staff said to me that the second goal was a clear handball. And I think it’s not right to comment on the refereeing decisions after the game. I don’t know if Jurgen wanted to comment on this, but I can tell you that my staff said to me it was incredible to give it, and not disallow it, because there was a clear handball from Salah.

“But the game was an exciting game, there were great emotions from the people. I don’t like that we have to speak about the refereeing decisions at the end.”

Liverpool host Leicester in the Carabao Cup last eight on Wednesday at 7.45pm before hosting Leeds in the Premier League at 12.30pm on Boxing Day.