Rashford played the entire 120 minutes as United drew 1-1 with Villarreal in Gdansk, and scored his penalty in the shootout, which the Premier League side lost 11-10.

But following the match, Rashford wrote on Twitter: “At least 70 racial slurs on my social accounts counted so far. For those working to make me feel any worse than I already do, good luck trying.”

United said a number of their players were racially abused online following the final in Poland, although it is currently unclear who other than Rashford was targeted. 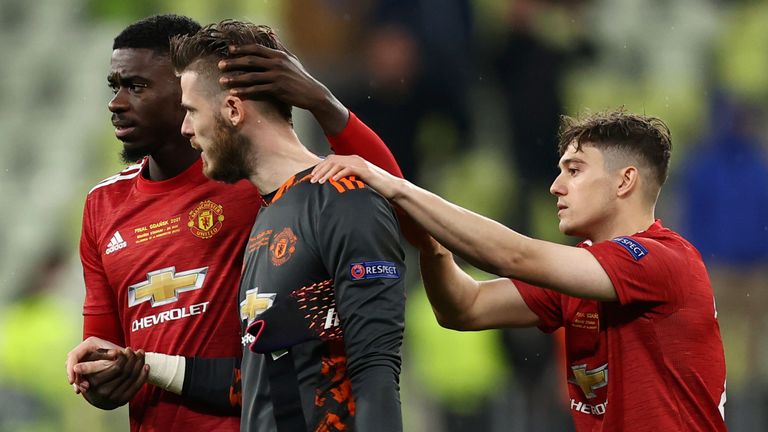 They tweeted: “Following the #UEL final, our players were subjected to disgraceful racist abuse. If you see any form of abuse or discrimination, act and report it.”

Rashford was also racially abused online following United’s draw with Arsenal in January, after which the forward said: “Humanity and social media at its worst.

“Yes I’m a black man and I live every day proud that I am. No one, or no one comment, is going to make me feel any different. So sorry if you were looking for a strong reaction, you’re just simply not going to get it here.

“I’m not sharing screenshots. It would be irresponsible to do so and as you can imagine there’s nothing original in them. I have beautiful children of all colours following me and they don’t need to read it. Beautiful colours that should only be celebrated.”

Speaking to Sky News just weeks after receiving the abuse, Rashford called on social media companies to do more to prevent users from being able to racially abuse others on their platforms.

He said: “Online abuse – it should be easy to stop, just deactivate the accounts. We know that it’s very easy to make four or five accounts but if you have to block them all, then block them all.

“That’s on the social media companies themselves. If they see anyone being abusive in any way, their account should be deleted immediately – that’s how you’d deal with it.

“I feel like it doesn’t affect me as much as other people because I’m not actively on social media so half the stuff that goes on on there, what people are saying about me and other people, I’m not really on top of and I don’t see it.

“But it’s a place people should enjoy. Ten or 15 years ago it wasn’t there and we’re lucky to have it, to be able to connect with people all over the world and from different cultures and religions.

“For it to be used in a negative light is stupid and hopefully they can sort out that issue and it can be a place of good.”

Sky Sports is committed to making skysports.com and our channels on social media platforms a place for comment and debate that is free of abuse, hate and profanity.

If you see a reply to Sky Sports posts and/or content with an expression of hate on the basis of race, sex, colour, gender, nationality, ethnicity, disability, religion, sexuality, age or class, please copy the URL to the hateful post and screengrab it and email us here.

Kick It Out reporting racism