Mikel Arteta apologised for Arsenal’s insipid performance during Saturday’s 3-0 home defeat to Liverpool, admitting his players should have lost by a bigger margin.

Manchester City’s win at Leicester earlier in the day meant Liverpool’s hopes of retaining their title were mathematically over after a season of mixed performances, poor results and terrible injury problems.

But they were back to their scintillating best at the Emirates Stadium as they dominated Arsenal and secured a 3-0 win courtesy of a brace from substitute Diogo Jota either side of a Mohamed Salah strike.

Arteta told Sky Sports: “We completely deserved to lose the game. They were better in every department and deserved to win the game with the margin they had, or even more. I accept responsibility for the way we played today. “Liverpool completely deserved to win the game, probably by a bigger margin. We were extremely poor. We apologise.

“They made the right decisions, we didn’t. It is my fault. I have to set the team up to perform in a different way and that is it. Congratulations to Liverpool because they were exceptional today. That showed the difference between the two teams – that when they play at that level, the margin is incredibly high. 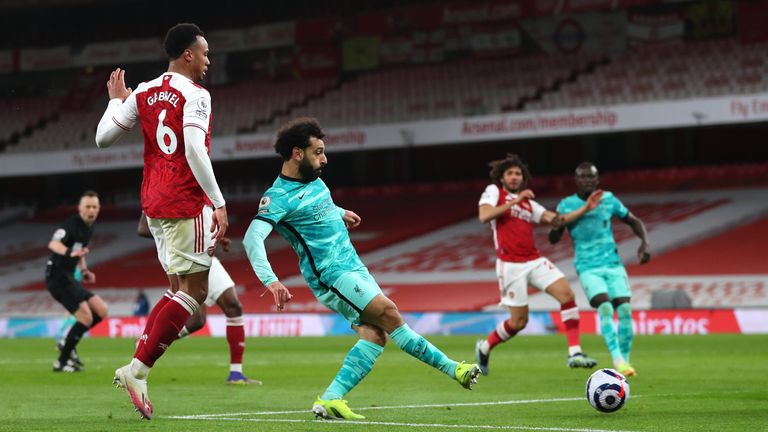 “I don’t have to use any excuses – that we don’t have five or six players – the standards are much higher at this football club and I have to get them to perform at that level. It was technical as well.

“We gave every ball away and could not put three passes together. The basics weren’t there today. If you do that against this kind of opponent, you get punished like we have.

“At the moment I am in shock. I didn’t expect that because of the way the team trained. It is a challenge. A challenge brings an opportunity. If you have courage and you represent a club like this, you have to stand up and take it.” This was Mikel Arteta’s 50th Premier League fixture in charge of Arsenal and before the game he called for the Gunners to take the game to Liverpool, having won the corresponding fixture last year with a mixture of guile, guts and luck.

But with injured quartet of David Luiz, Granit Xhaka, Bukayo Saka and Emile Smith Rowe missing, Arteta admitted his side got what they deserved – and Gary Neville believes the Spaniard now has a clear picture of what he needs to do in the summer transfer window.

“I used the word flaky about Arsenal in the first half. But this turned into a really flaky performance that took me back a few years,” Neville told Sky Sports. “It’s the worst I’ve seen them for a bit.

“Liverpool eventually gave Arsenal what they deserved in the first half. They served it up to them in the second. The result tells Mikel Arteta what he already knew. “He’d worked this out a few months ago that the group of players he had on the pitch don’t combine together to play in the way in which he wants them to. The defeat was just confirmation of it.

“They became a bit of a sorry state after the second goal – they were all over the place. At 0-0 at half-time, people may have thought I was being harsh on them but there was no urgency, no life, no plan and they were taking the easy option on passing back.

“I look at those eyes of Arteta, and there will be an element of ferocity in them. Tonight, he’ll go home knowing what he needs to do in the transfer window at the end of the season. The pass from Gabriel for Liverpool’s third lacked to say the very least. By then, Liverpool were in a brutal mood and Jota devoured the chance. 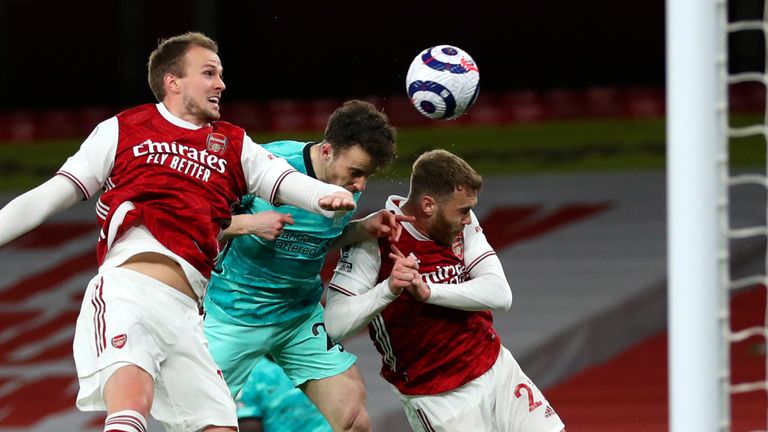 “I’ve got no doubt from now on in the Premier League, Arteta will look to the younger players. He would’ve done anyway had some of them been fit, but in the first half I described them as fed lions. He wants hungry ones.

“The fans will be disappointed but the most disappointed person will be the manager. I was here for the game where they beat Chelsea. There were a number of withdrawals before the match and we said it was a big chance for those young lads. They might have got swamped but they grew and emerged.

“We saw a new Arsenal, but we’ve seen the old Arsenal here tonight where it’s looked very shabby. I’ve not liked it at all from minute one. There’s been a real lack of hunger.

“There’s been a lack of pace and a lack of a plan, but when you’re carrying too many who don’t want to do the work without the ball to the extent that the four or five who are missing do, Arteta’s game plan goes. Everything you try to do is then compromised.

“He knows where he needs to go and he just got confirmation of it. They were playing against a good Liverpool team but one that was lacking in confidence. He’s not been able to exploit that at all.”

‘Arteta has credit in bank, but this was a backwards step’

Arsenal have only picked up one victory from their last 12 Premier League matches against Liverpool, while Arteta will now reflect on his half century of Premier League games as Gunners boss in the knowledge that his predecessor Unai Emery (13) lost four fewer games after his first 50 games in the competition.

So have Arsenal progressed since Arteta’s appointment in December 2019?

“This isn’t good enough for Arsenal. This is a side who wants to be attracting the best players next season. I know they’ve got the Europa League to look forward to, but the way his side played tonight, Mikel has to pick their confidence up really quickly.

“That today was like watching Arsenal six or seven months ago when they were really struggling and there was a lot of talk of Arteta losing his job. It was really poor.

“Arsenal fans have been brought up on attacking football with the likes of Henry, Bergkamp, Ljungberg, Pires but right now they’re probably watching that game from behind their sofa. They don’t want to hear about their team defending better.

“They’d rather see there team go out and lose 4-3 but through playing in the right manner. They’ve got to be exciting to watch as this is Arsenal.”

Arsenal now host Slavia Prague in their Europa League quarter-final first leg at 8pm on Thursday, before going to Sheffield United at 7pm on Sunday in the Premier League.

Liverpool go to Real Madrid at 8pm on Tuesday in the Champions League quarter-final first leg, and then host Aston Villa at 3pm on Saturday, live on Sky Sports Premier League.

ICC has no relevance without BCCI: Anurag Thakur – Sports News