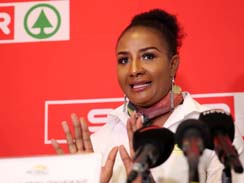 Molokwane had been among the first prominent South Africans to test positive for the coronavirus, which Netball SA had announced on Tuesday, March 24.

This followed a business trip to the United Kingdom for meetings connected to Cape Town’s hosting of the 2023 Netball World Cup.

“Molokwane had been in quarantine as per instructions by her medical doctor and has since gone back to retest,” Netball SA said in a statement.

“The results came back on Saturday, April 4 and the president has now tested negative. She joins over 50 people who have recovered from the pandemic.

“Ms Molokwane would also like to inform the public that none of the persons she interacted with upon her return from the UK has tested positive.”

Netball SA said Molokwane had come in for negative public reaction after it was announced she had tested positive, as she had been meeting with various leading sports administrators and leaders, including Sports Minister Nathi Mthethwa.

“Molokwane had travelled to the United Kingdom and had several meetings with heads of various sports federations including the Minister of Sports, Arts and Culture Nathi Mthethwa prior to her testing positive,” the association’s release stated.