Ole Gunnar Solskjaer called Manchester United’s 5-0 thrashing by Liverpool his “darkest day” as manager of the club, but with his job under pressure, remained adamant his squad are close to success.

It has been a dismal recent run of results in the Premier League for United, with Sunday’s defeat by one of their biggest rivals leaving them winless in four top-flight matches.

It did not take long for Liverpool to take a 2-0 lead, doubling that before half-time with two Mohamed Salah goals. The forward completed his hat-trick early in the second half, before Paul Pogba compounded Man Utd’s misery with a straight red card 15 minutes after coming on as a half-time substitute.

The defeat once again raises questions over United’s defensive capabilities, and whether their expensive talent can gel together as a squad.

Speaking to Sky Sports after the game, Solskjaer said: “It’s not easy to say something, apart from it’s the darkest day I’ve had leading these players.

“We weren’t good enough individually or as a team. You can’t give a team like Liverpool those chances and unfortunately, we did.

“The whole performance wasn’t good enough, that’s for sure. We have created openings, they have had chances, they have been clinical and we did not take our chances early on. Then the third goal is the one that decided the game.

“It’s mine [responsibly for the loss] – that’s it. The coaching staff are brilliant and I choose the way we approach the game and today, we weren’t clinical enough going forward. There were spaces for both teams and when you give good players spaces, they score.

“You can look back at last season when we lost 6-1 to Spurs – this is miles worse. The opposition as well, that makes it miles worse for me as a Manchester lad and we have to get over this as quick as we can and move on.”

Sunday’s 5-0 loss was Man Utd’s third-largest home defeat in the Premier League and dramatically increases the pressure on Solskjaer’s tenure as United manager.

When asked if he was still the right man to lead the team, he replied: “We’ve come too far as a group and we’re too close to give up now.

“I’ve heard nothing else [about a potential departure], and I’m still thinking about tomorrow’s work, of course. We’re all low. I can’t say now that I’ve felt any worse than this. This is the lowest I’ve been. But as I’ve said, I accept the responsibility, and that is mine today. It’s mine going forward.

“I do believe in myself, I do believe that I am getting close to what I want with the club, I think what we’ve done, what I’ve seen, the development, of course, the results lately haven’t been good enough. But I’ve got to keep strong and I do believe in what we’ve been doing, the coaching staff and the players.”

Solskjaer now faces the huge task of picking up his squad and staff ahead of their trip to Tottenham on Saturday Night Football next weekend.

“The only way I know how to approach life is to wake up tomorrow morning, look forward, of course evaluate what has gone on and do my very, very best and be determined to come through difficult times,” he said.

“This is the worst feeling, you feel rock bottom, after the feeling we have had that we are getting to where we want to be has been there, but the last few weeks we have hit a brick wall. Results have not come, the performances have not come, and we have conceded too many easy goals. That’s a concern.

“But the time is now. Manchester United have had tough difficult times before and have always bounced back, and we have taken on challenges.

“Last season, we were second, this season we have started badly. We have hit a brick wall. You have got to get through that one. You have got to start building performances, results, and clean sheets and see where that takes us.”

Maguire: We were nowhere near good enough

Man Utd captain Harry Maguire issued his own apology to the fans – some who left at half-time and continued to do so throughout the second half – and says the players must stick together.

He told Sky Sports: “First and foremost, apologies to the fans. It’s nowhere near good enough for this club. We’re all disappointed.

“They stuck with us even coming off the pitch at 5-0, they are singing and we appreciate that. But for us as a club, we have got to do better. 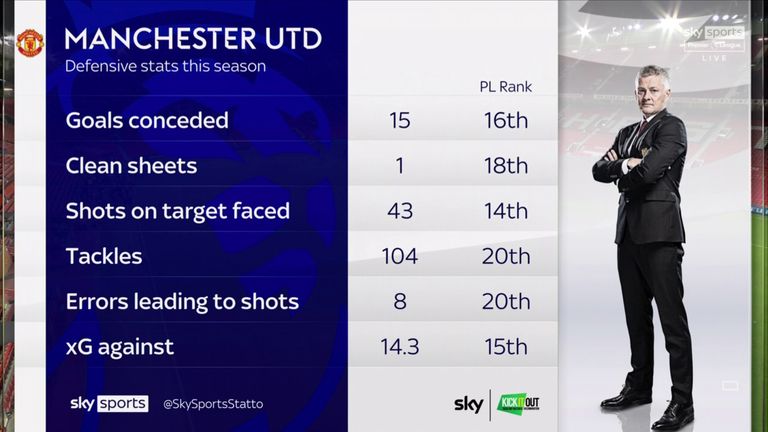 “In the first half, it was too open… We gave them too many chances, they were really clinical and we had a lot of chances ourselves. But I’m a defender first and foremost and to concede four in a half of football, playing at Old Trafford for this football club, it’s nowhere near good enough.

“As a player, I will be looking at myself, my individual performance and as a team, I am the captain of this club so I lead the boys. We have got to stick together. There us no point in blaming people, we have got to look at each other. We will go home tonight and look at ourselves in the mirror and think what you can do better.

“The group of lads in there, I look at them each day in training and they are doing everything they can and we are working as hard as possible, but at the moment, it’s not good enough. I keep coming back to that phrase, but that’s the only way I can put it.”

Klopp: We wrote a new chapter

Jurgen Klopp seemed in a mild state of disbelief after his Liverpool team’s wonderful performance and was proud his side had once again added to the history of the club.

He told Sky Sports: “Did I expect that? No. But what we did in the last third was absolutely insane. How we pressed them high, won balls, scored wonderful goals. I actually told the guys at half-time we need to play better!

“The result is insane. It will take a while if it ever happens again. After the game I got told this has never happened before in the long history of Liverpool and this group wanted to make new chapters for this big history, and tonight was a new chapter.

Milly and Naby are injured, we have to see how serious it is. We will know day after tomorrow.

“When I analyse the game, I cut the goals off and analyse the game. The result is not interesting to analyse. We could play better football than we have to, and we have to stay more concentrated in some moments.

“I couldn’t be happier, because it’s just incredible being part of this team. Winning 5-0 is exceptional.”

He also had praise for hat-trick hero Salah, as well as Roberto Firmino, who lined up alongside the Egypt forward in attack.

“What can I say. Mo is in great shape at the moment, and he deals really well with the fuss that everyone in the world makes around him. Long, long, long, long may it continue.

5 – Liverpool have won consecutive league games by 5+ goals for only the second time in the top-flight, and first time since winning 5-0 vs Stoke City and 6-0 vs Chelsea on consecutive days in April 1935. Spectacular. pic.twitter.com/isOxl1MdOY

“Bobby played outstandingly well. Mo gets a lot of attention and rightly so, but Bobby, for people with football knowledge, I’m pretty sure when he finished playing people will write books about how he interpreted the false nine position. I won’t say we invented it or he invented it, but the way he plays sometimes it looks like it.

“Some of the things he did defensively in that department tonight was absolutely insane, and offensively he is a nice link up player. Bobby knows how much we appreciate what he is doing.”

Salah: We dominated the game

Salah took away the match ball from Old Trafford, continuing an already brilliant run of form this season, and gave an insight into just how Liverpool won in such a fashion.

“I think it’s great to win 5-0 here,” he said. “We knew it was going to be tough if we didn’t play our game, so I think we managed to do that from the beginning, which makes the game easier.

“We knew that they would come and try to give everything to win the game, so in our heads, we had to give 100 per cent. We needed to dominate the game and I think we did it.

“As a team, from the beginning, we just tried to play our football, to get the ball in between the lines and I think we did that. Also keeping the ball for as long as possible to try and create more chances and I think we were lucky to do that in the first half and we scored from that.

“We won the Premier League two years ago, so we know what it takes. It’s still one game, of course when you win away against Man United, it’s really big. But at the end of the day, it’s still three points.”

Joe Biden is Not President Elect | One America News Network