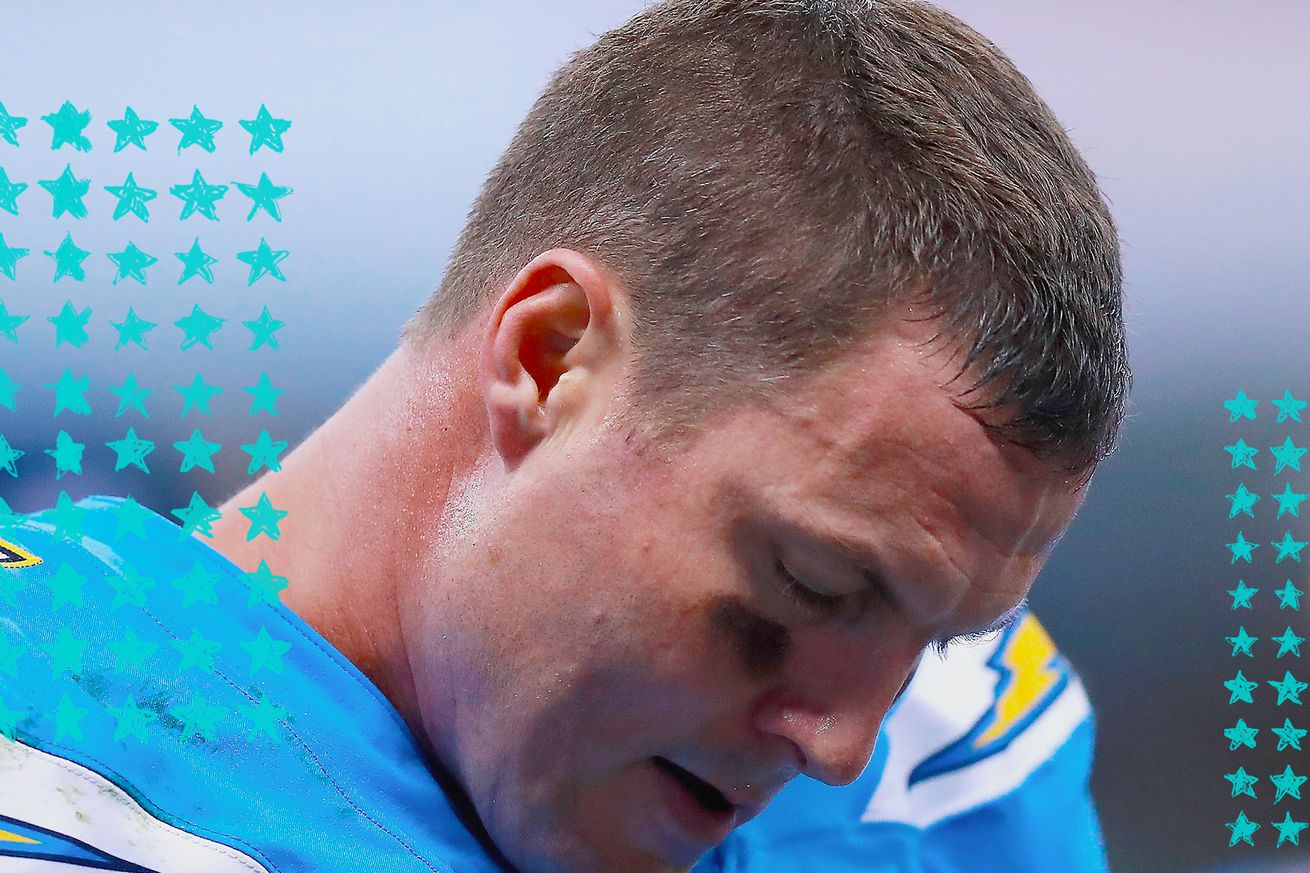 Philip Rivers has thrown an interception in the final minutes of four of the Chargers’ losses in 2019.

No quarterback has lost more one-score games in the Super Bowl era than Philip Rivers.

The Chargers had a chance to force overtime against the Chiefs in Week 11. After a defensive stop, Los Angeles got the ball back with just under two minutes left in the Monday Night Football matchup. Rivers needed to move his team 91 yards down the field for a game-tying touchdown.

Before the drive even began, everyone already knew how the game would end, though.

For those of you who are watching your first Chargers game in a while/this season/ever. The defense is going to make a stand again here. It’s going to finish a 1 score game. There will be “hope” until it’s over.

Alas, they were right. Rivers got the Chargers to the Kansas City 14-yard line before his throw to the end zone was intercepted by the Chiefs. Game over.

Los Angeles came up just short … like always. All seven of the team’s losses in 2019 have been decided by a margin of seven points or less.

One week earlier, the Chargers only needed to drive into field goal range to beat the Raiders. Facing a 26-24 deficit with about a minute left, Rivers had seven consecutive incompletions (one was nullified by a penalty) followed by a game-ending interception.

Maybe a younger version of Rivers would’ve pulled off a pair comebacks in those games. He has 32 career game-winning drives over the course of his career, including two in 2019. Unfortunately, those moments aren’t Rivers’ legacy.

His career — which may only have a few games left — will probably be remembered for what he didn’t accomplish rather than what he did.

The loss to the Chiefs in Week 11 was the 61st time in Rivers’ career he’s dropped a one-score game. According to ESPN, that’s a record among quarterbacks in the Super Bowl era.

That reflects poorly on Rivers, especially after finishing his last two losses with interceptions. He also threw a pick in the final minutes against the Lions in Week 2, and another against the Steelers in Week 6.

But it isn’t all his fault. Melvin Gordon fumbled on the 1-yard line earlier this season to ruin a chance to beat the Titans. There was also that time in 2017 when the Chargers opened the season with back-to-back losses due to missed field goals in the final seconds.

The team’s reputation for last-minute implosion is more synonymous with the Chargers than Rivers, specifically. Even receiver Keenan Allen has acknowledged as much on Twitter:

Still, when the Hall of Fame eligibility window opens for Rivers, the talk will center around all the times he couldn’t get the job done. He’s an eight-time Pro Bowler who’s sixth all-time in both passing yards and touchdowns. All that production has yielded exactly zero trips to the Super Bowl and just one AFC Championship appearance, way back in January 2008.

Dolphins legend Dan Marino, who never won a Super Bowl, had to battle the same criticisms during a record-breaking career. The difference is that Marino at least made it to one and ended his career in the top spot in both yardage and touchdowns. He was then elected to the Hall of Fame on his first ballot.

Rivers may not be afforded the same slack for his lack of accomplishments. And 2018 may have been his last chance to change that narrative.

Last season was one of the best ever for Rivers. He posted a 105.5 passer rating with 32 touchdowns and 12 interceptions, while leading the Chargers to a 12-4 record.

It had all the makings of a perfect ending to his career, but — like so many years before — it ended with a frustrating postseason defeat. Rivers completed just 25 of his 51 passes in a 41-28 loss to the Patriots that wasn’t even as close as the score indicates.

Plenty has changed since then, though.

Rivers turns 38 in December and his play has fallen off a cliff. The Buccaneers’ Jameis Winston is the only quarterback in the NFL throwing more interceptions than Rivers, who has 14. His passer rating of 85.5 is his lowest in a season since 2007, his second year as the Chargers’ starter. He’s only thrown 15 touchdowns on over 400 pass attempts; that 3.6 percent rate is the lowest of his career.

And his interceptions aren’t just late-game desperation heaves, either. The inexplicably poor decisions by Rivers have happened throughout games.

Kyle Fuller intercepts Rivers and almost returns it to the house! #LACvsCHI #Bears100

Unless a miracle happens, the team won’t be making the playoffs. Rivers’ contract expires in the spring and, for the first time, he’s been more of a negative than a positive for the franchise. Even if Rivers decides he wants to return in 2019, there’s a good chance the Chargers choose to move on.

Their offseason could revolve around either finding a quarterback of the future to take over for Rivers. There are also a few veteran options expected to hit the market who could start be a stopgap starter for the Chargers in 2020.

There are a few teams that could probably use a veteran presence like Rivers to temporarily take the wheel — like the Bears or Buccaneers, for instance. But it’s also hard to imagine Rivers moving his large family out of Southern California (imagine changing all those schools!). He didn’t even leave San Diego when the Chargers did, opting instead for a daily 80-mile commute in a tricked out SUV.

One way or another, Rivers’ career is nearing its conclusion and it’s hard to envision it ending with confetti. Sadly, it’ll probably end with Rivers being remembered as a quarterback who — like he did against the Chiefs — always came up just a little short.

Freddie & Arsene would love to talk