Pittsburgh Borough of Police is searching for answers in the case of a missing local artist. NNPA News Wire reports that 22-year-old Tonee Turner was last seen on Dec. 30 at a Bohemian-style tearoom in the city.

Turner, a full-time metal fabricator at Studebaker Metals in Braddock, PA, is approximately 5’ 2” tall and weighs 130 pounds. Her hair is black and shoulder-length, often worn wavy or in a bonnet. The last known whereabouts for Turner are at Dobra Tea, roughly 5 miles from Braddock Carnegie Library where she worked as a part-time ceramics teacher.

According to NNPA, her family believes that from there she may have traveled down Interstate 80 near Homestead, PA. Local CBS affiliate KDKA, reported that the young woman’s purse was discovered by a man riding his bike near a local bride in the Hill District of the city. In it were Turner’s wallet, cell phone, and keys which were turned over to authorities.

Turner was described to NNPA as an educator, lover of dance, and a frequent concert-goer. She was also well known within her community. Last week, the Post Gazette reports that more than 100 people joined together to simply say, “Tonee come home.” 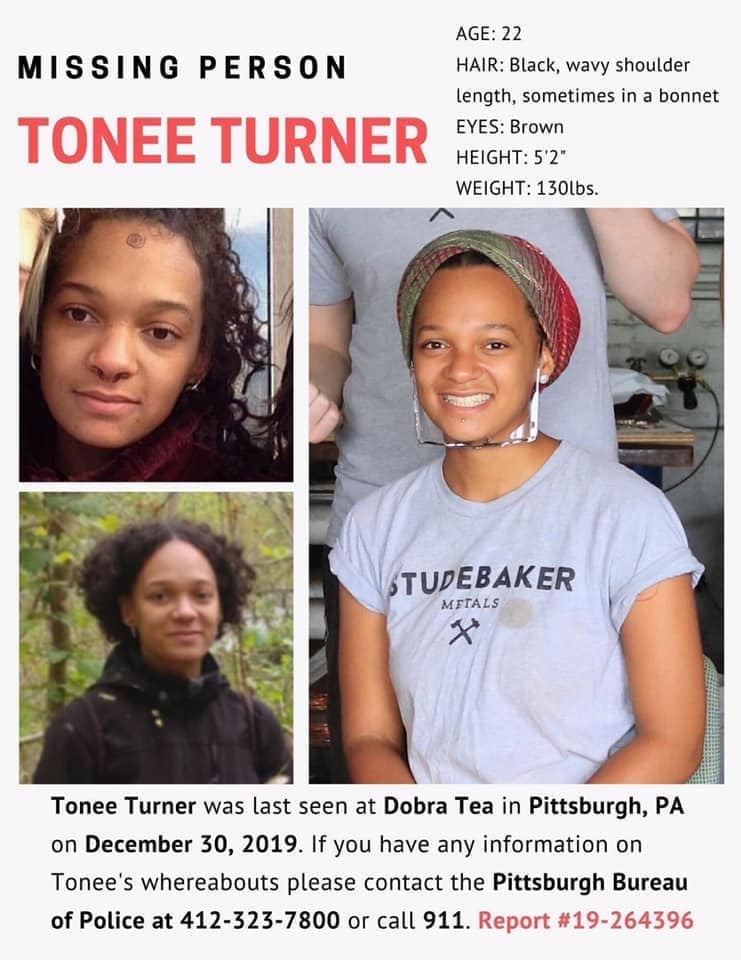 “All the information people are giving and all the flyering, I just feel so blessed that Tonee has touched so many lives that people are so passionate to continue to find her and the belief that Tonee is going to come today, every today is so tangible and palpable,” Sydnee Turner, Tonee’s sister told KDKA.

The family has been going door to door in the neighborhood where Turner’s belongings were found. They’ve also posted flyers throughout the city in hopes that somebody can lead them to clues on where she may be. Though they remain optimistic, Turner’s mother, Darlene Johnson, told the Post-Gazette that she is, “starting to think the worst because of the time that’s gone by without hearing anything.”

The family had raised nearly $8,000 as of Saturday night to help with search costs. Police consider the case an active investigation and have asked that anyone with information about Tonee Turner, call 412-323-7800, or 911.