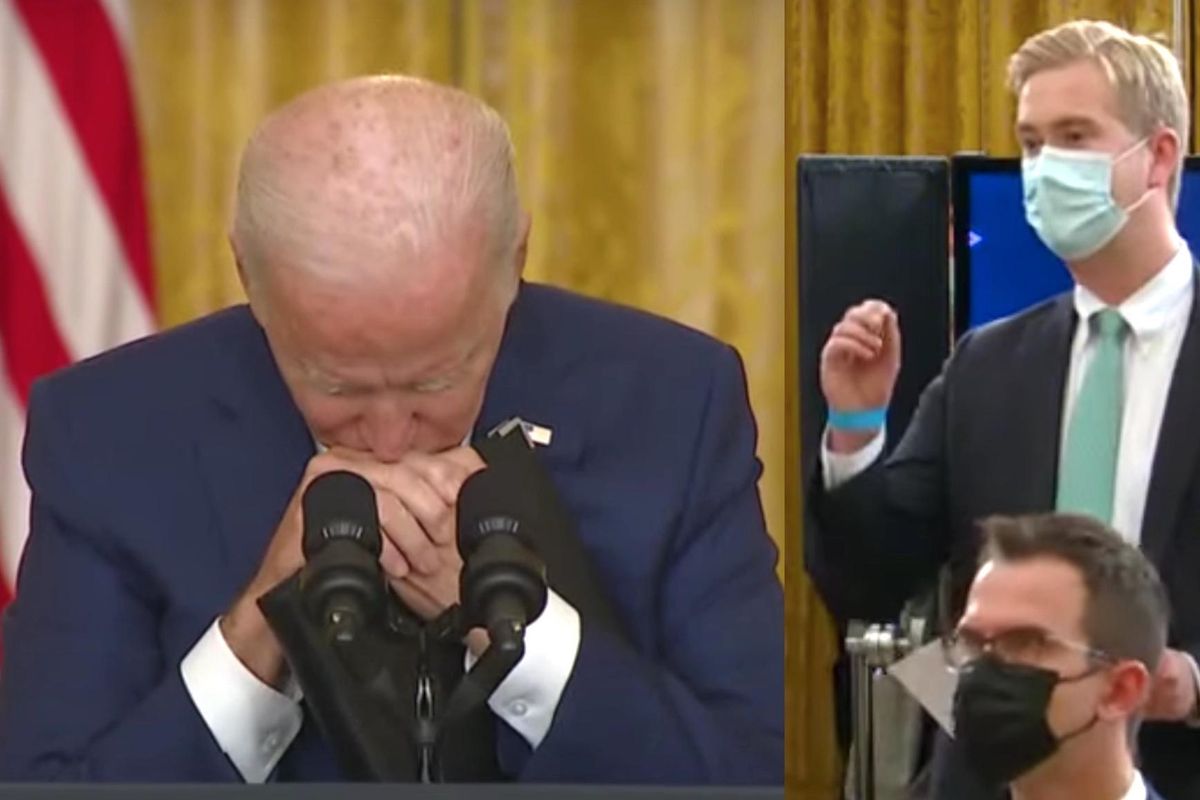 President Joe Biden appeared to get flustered as Peter Doocy of Fox News challenged him to take responsibility for the debacle in Afghanistan that has now cost the lives of 12 U.S. service members.

Biden had a moment of silence during the briefing Thursday for the service members killed in the attack and he promised to have a military response against those who were responsible.

After the briefing, Doocy asked Biden if he took full responsibility for the events leading to the attack.

“Mr. President, there had not been a U.S. service member killed in combat in Afghanistan since February of 2020. You set a deadline, you pulled troops out, you sent troops back in, and now 12 Marines are dead,” said Doocy.

“You said the buck stops with you. Do you bear any responsibility for the way things have unfolded in the last two weeks?” Doocy asked.

“I bear responsibility fundamentally for all that has happened of late,” Biden replied.

“But here’s the deal. You know, I wish you someday would say these things, you know as well as I do, that the former president made a deal with the Taliban that he would get all American forces out of Afghanistan by May 1,” he continued.

“In return, he was given a commitment that the Taliban would continue to attack others but would not attack any American forces. Do you remember that? I’m being serious. I’m asking you a question,” he added, interrupting Doocy.

The president laid his head on his hands in frustration at Doocy during their crosstalk.

Biden also stood by his decision to withdraw from Afghanistan after Doocy pressed him on the issue.

“Yes I do, because look at it this way folks,” Biden replied.

“Imagine where we’d be if I had indicated on May the 1st I was not going to renegotiate an evacuation date. We were gonna stay there. I’d have only one alternative: Pour thousands of more troops back into Afghanistan to fight a war that we had already won relative to why the reason we went in the first place,” he explained.

“I have never been of the view that we should be sacrificing American lives to try to establish a Democratic government in Afghanistan,” Biden continued, “a country that has never once in its entire history been a united country, and is made up, and I don’t mean this in a derogatory, made up of different tribes who have never ever ever gotten along with one another.”

Biden ended the briefing at that point and cited other meetings he needed to attend.

Here’s the video of the exchange between Doocy and Biden:

Can Fox News viewers be deprogrammed? Paying them to watch CNN makes them less gullible | Salon.com

Dominion Sues Fox News For $1.6B Over 2020 Election Rigging Claims