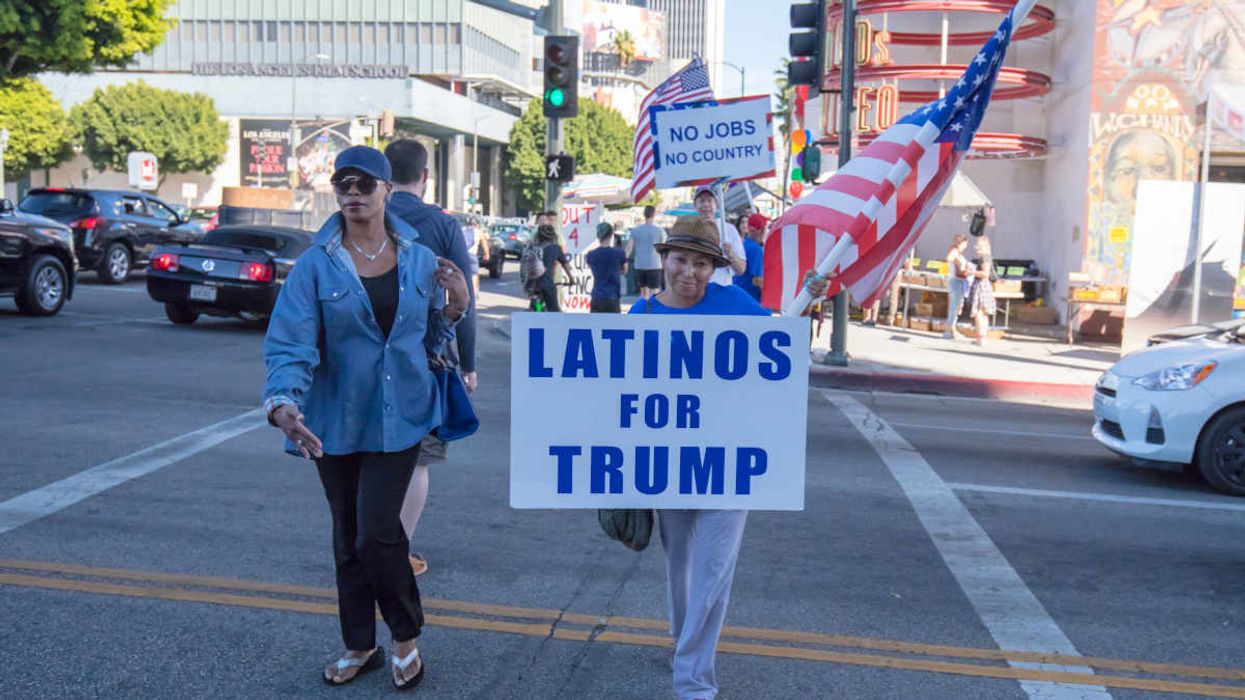 Former Vice President and Democratic nominee Joe Biden is struggling to reach Latino voters. That statement is not pro-Trump wish-casting about the 2020 election, it’s mainstream analysis reported by CNN, the Financial Times, The Atlantic, and even The Daily Beast, hardly Trump-friendly publications.

When it comes to the question of “why” Biden is underperforming with Hispanics, two progressive researchers sought to find out and in an op-ed published Friday they characterized the results of their research as “sobering.”

As it turns out, so-called “dog-whistle” messaging based on Republican campaign talking points on immigration as well as other issues resonated with Latino and other minority voters. In fact, Latino voters found such messaging more convincing than even white and black voters. The standard-packaged Democratic talking points condemning President Donald Trump as a bigot and criticizing structural racism were less-effective with these voters.

Writing in the New York Times, researchers Ian Haney López, a law professor at the University of California, Berkeley, and Tory Gavito, founder of the left-wing Texas Future Project, cite recent polling from Quinnipiac and Monmouth that found 38% of registered Hispanic voters in 10 battleground states may be “ambivalent about even voting,” arguing that Latinos will be “a key component of the swing voters in this election.”

Knowing the Latino vote will be crucial for Biden to beat Trump, López and Gavito commissioned liberal pollsters to conduct 15 focus groups with Hispanics, whites, and African Americans from across America. You can find their research here.

They began by asking these focus groups whether a “dog-whistle message lifted from Republican talking points” was convincing. The study refers to this message as the “opposition message” and part of it condemns “illegal immigration from places overrun with drugs and criminal gangs” and calls for “fully funding the police so our communities are not threatened by people who refuse to follow our laws.”

In full, the “opposition message” reads:

Our leaders must prioritize keeping us safe and ensuring that hardworking Americans have the freedom to prosper. Leaders who built a strong economy once can do it again after COVID-19.

Taking a second look at China, or illegal immigration from places overrun with drugs and criminal gangs, is just common sense. And so is fully funding the police, so our communities are not threatened by people who refuse to follow our laws.

We need to make sure we can take care of our own people first, especially the people who politicians have cast aside for too long to cater to whatever special interest groups yell the loudest or riot in the street.

“These numbers do not translate directly into support for the Republican Party,” the researchers explain. “Nevertheless, the results tell us something important: a majority across the groups we surveyed did not repudiate Trump-style rhetoric as obviously racist and divisive, but instead agreed with it.”

Translation: Majorities of white, black, and Latino voters responded positively to a pro-market, pro-sovereignty, pro-law and order message about caring for Americans forgotten by politicians and special interest groups and antagonized by rioters. That is, essentially, Trump’s re-election message.

Now, for full context, the study characterized this message as code for “business leaders should run the country,” people of color are “dangerous and undeserving,” and hating “liberal government” because “it coddles criminals and welfare recipients — and thus betrays whites by favoring people of color.” This is what they mean by “dog-whistle,” that when supposedly racist and bigoted Trump supporters hear things like “Taking a second look at China,” and “fully funding the police,” they know that what Republicans are really talking about is using government to protect whites by oppressing minorities.

Naturally, these progressives are distressed that such a supposedly evil message resonates with the voters they need to win the election. And this is where the analysis from López and Gavito becomes fascinating, as they try to understand why this message works with Latinos.

“Hispanics, of course, are no more monolithic than any other group, and internal differences influenced how individuals reacted,” they write. “The single biggest factor was how respondents thought about Hispanic racial identity. More than whether the individual was Mexican-American or from Cuba, young or old, male or female, from Texas, Florida or California, how the person perceived the racial identity of Latinos as a group shaped his or her receptivity to a message stoking racial division.”

They continue (bolded for emphasis):

Progressives commonly categorize Latinos as people of color, no doubt partly because
progressive Latinos see the group that way and encourage others to do so as well. Certainly, we both once took that perspective for granted. Yet in our survey, only one in four Hispanics saw the group as people of color.

In contrast, the majority rejected this designation. They preferred to see Hispanics as a group integrating into the American mainstream, one not overly bound by racial constraints but instead able to get ahead through hard work.

The minority of Latinos who saw the group as people of color were more liberal in their views regarding government and the economy, and strongly preferred Democratic messages to the dog-whistle message. For the majority of Latinos, however, the standard Democratic frames tied or lost to the racial fear message. In other words, Mr. Trump’s competitiveness among Latinos is real.

In other words, most Hispanic voters do not see themselves as part of an oppressed racial class. They have a Hispanic heritage and are proud of it, but they want to be Americans too. They want to assimilate, and they believe that with hard work they can achieve the American dream.

“Even more than whites and Blacks, Hispanics emphasize the importance of hard work and favor government creating opportunities for advancement,” the study says.

Most Latinos do not believe there is systematic racism in American institutions standing as an obstacle to their success. And that’s why they’re receptive to “Trump-style rhetoric.”

This is a problem for Joe Biden, and López and Gavito offer a simple solution: Change the message.

“The key is to link racism and class conflict,” they say. And also to stop blaming white people as a group for everything wrong in America.

“Democrats should call for Americans to unite against the strategic racism of powerful elites who stoke division and then run the country for their own benefit. This is not to deny the reality of pervasive societal racism. But it does direct attention away from whites in general and toward the powerful elites who benefit from divide-and-conquer politics.”

This focus-tested “race-class approach … fuses issues of racial division and class inequality, and by doing so shifts the basic ‘us versus them’ story — the staple of most political messaging — away from ‘whites versus people of color’ to ‘us all against the powerful elites pushing division.'”

We had come so far, but now Covid-19 threatens our families — for instance with health
risks, record unemployment and losing the businesses we worked hard to build. To
overcome these challenges, we need to pull together no matter our race or ethnicity. But
instead of uniting us, certain politicians make divisions worse, insulting and blaming
different groups. When they divide us, they can more easily rig our government and the
economy for their wealthy campaign donors. When we come together by rejecting racism
against anyone, we can elect new leaders who support proven solutions that help all
working families.

López and Gavito advise Biden and Democratic Party strategists to view Hispanics “not as a monolith but as America in microcosm.” The study they put forward urges Democrats to make cross-racial appeals to voters, uniting Latinos, whites, and blacks in solidarity by framing their issues as a struggle against unresponsive elites ignoring their needs and pushing division.

Ironically, this closely resembles the populist messaging President Trump used in the 2016 election to win the White House. Trump ran a “drain the swamp” campaign focused on criticizing establishment politicians. As he promised in his victory speech, “the forgotten men and women of our country will be forgotten no longer.”

Despite what progressives claim, the “forgotten” American does not have one race or creed. Trump’s message attempted to appeal to all Americans who felt disenfranchised by politicians who did not keep their promises and a government that over decades grew too large to be in touch with their needs.

The Trump campaign and Republicans have just as much to learn from this study as the left. The lesson is Latino Americans, like all Americans, do not want to be divided. They still believe the elites are out of touch. They want to feel like someone is fighting for their interests, not special interests.

The challenge for President Trump as an incumbent is to argue he hasn’t forgotten the Americans who put him in power and to show how he has unified the country. The challenge for Biden is to credibly craft a unifying message while the assorted victim-classes in his base compete against each other to be the most oppressed and publicly declare their contempt for America.