Revealed: What London’s Disneyland-Style Theme Park Will Look Like

Okay, stay calm, but we could be getting our very own Disneyland-style resort!

Many years ago, it was announced that London—well, okay, a short 17-minute train ride away in north Kent—was getting its very own Hollywood-esque, Disneyland-style theme park. It’s been a complicated journey, but today, more images London’s planned magical kingdom have been revealed! 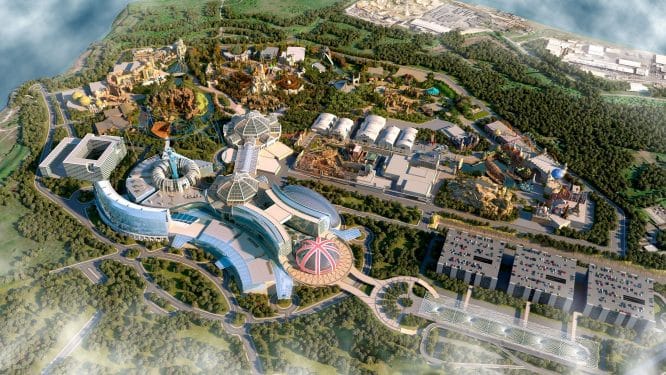 The resort was originally in partnership with Paramount Pictures — the oldest major Hollywood studio in existence — but after a parting of ways in 2017, the organisers reunited over Summer 2019 to bring their plans to the next level. The London Resort has also teamed up with other companies to make this dreamland happen, including BBC and ITV Studios.

And now, the London Resort has revealed new concept artwork for the six lands that will be created on this 535-acre site – the equivalent of 136 Wembley Stadiums! These four visuals give us a sneak peek into how the new home to immersive, next-generation rides will look when it opens in 2024…

We can expect to enter The London Resort via a grand plaza, leading us through ‘The High Street’ of shops, restaurants, hotels and a first-class waterpark! West End-style theatre shows, nightclubs, bars, and an art-house style cinema will also be found in the park.

Continue your journey in ‘The Studios’ – a gritty, modern-day warehouse district roaring with huge, blockbuster features. Expect everything from your favourite Hollywood films – from explosive action and high-octane car chases to high-stakes espionage.

Wander north and you’ll find yourself in ‘The Woods’ – an enchanted realm where springtime reigns eternal and the boundary between reality and fantasy dissolves. Step through the pages of a storybook and embark on adventures that put a fresh spin on beloved bedtime stories, fables and fairy tales. Then, discover ‘The Kingdom’, an immersive realm of swords, sorcery, dragons & legend, or ‘The Isles’, a land of giant creatures, mythical beasts and adventures.

Become an explorer in ‘The Jungle’, where ancient ruins of a mysterious long-lost civilisation are seen pushing up through the overgrown treetops…

Finally, you’ll find yourself in the ‘The Starport’ – dedicated to futuristic experiences, alien encounters and big thrill rides. This 23rd-century zone will launch you into thrilling science-fiction adventure!

While most themed rides are still in the planning phase, The Resort has confirmed that everyone’s favourite childhood show ‘Thunderbirds’ will be turned into an attraction! Paramount Pictures also own the rights to Mission Impossible, Star Trek and the Italian Job – more than enough inspiration for any rollercoaster designer, we reckon.

Frankly, we’re struggling to contain our excitement despite the uncertainty of the project – keep updated on The London Resort website. (Images courtesy of London Resort Company Holdings Ltd.)

The most festive Christmas markets in London in 2019

Extraordinary places you won’t believe are in London

PICS: She Used To Cover Her Vitiligo With Makeup, Today See Tiffany As A Stunning Viral Bride With No Makeup | FashionGHANA.com: 100% African Fashion