The legend of Gardner Minshew, explained by his dad > Latest World Sports News 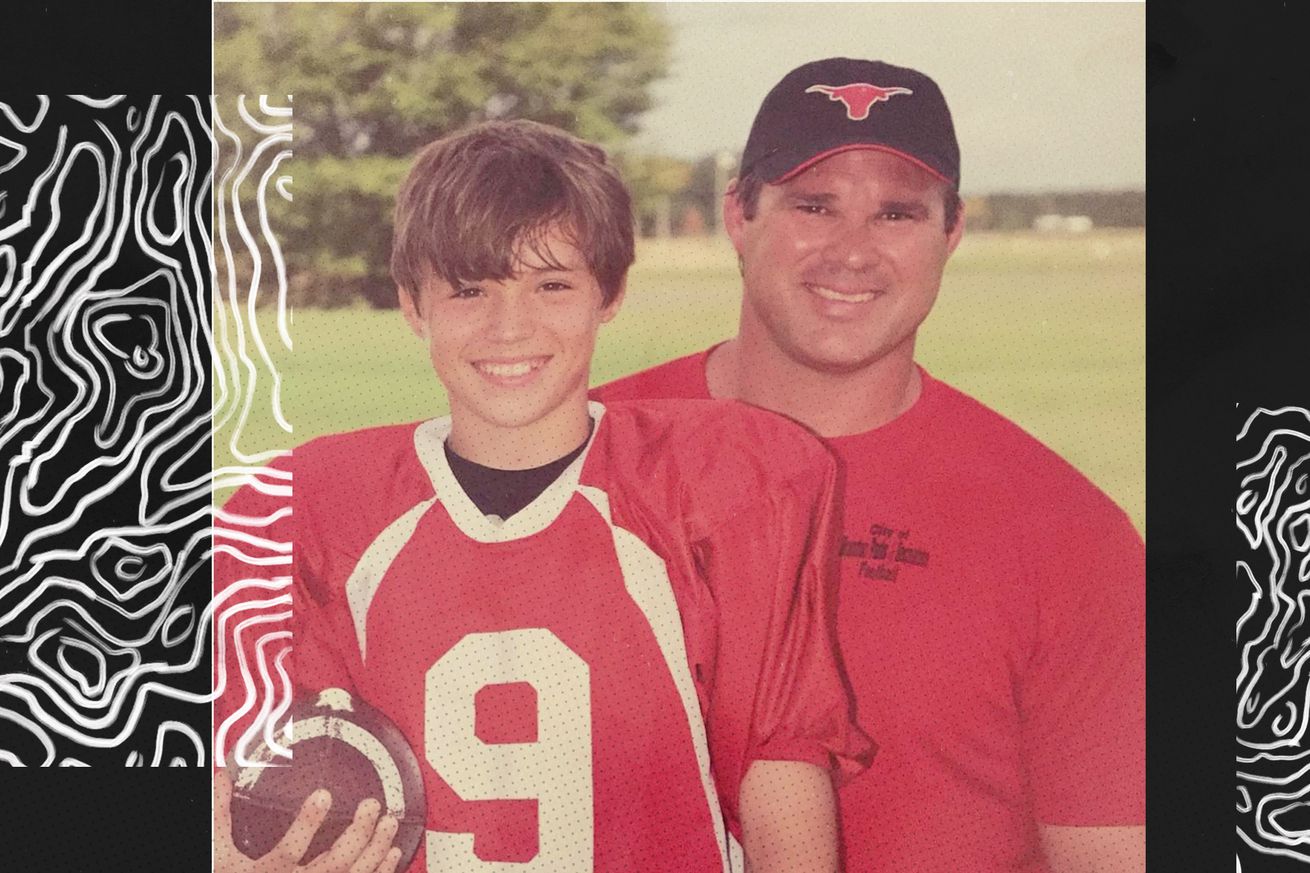 Just three weeks after Gardner Minshew stepped into the starting role for the Jacksonville Jaguars following Nick Foles’ injury, Minshew Mania has hit Duval and the rest of the NFL hard. The legend of the rookie quarterback only grows bigger each week, thanks to revelations like Minshew trying to break his hand with a hammer to earn a medical redshirt, and how he does pregame stretches wearing nothing but a jock strap.

There’s someone else who has gained attention during this whirlwind — besides Minshew’s mustache, which might be more famous than he is. That’s Gardner’s father, Flint. NFL Network cameras found Flint during Jacksonville’s Thursday Night Football win over the Tennessee Titans, and he was even interviewed alongside Gardner after the game.

We are all Gardner Minshew’s dad right now. pic.twitter.com/HLUog3cycP

The Minshew athletic genes run strong. Flint played defensive end at Millsaps College in the early 1990s and is in the Hall of Fame there. Gardner’s mom, Kim, played basketball at Mississippi State. His younger sister, Callie, is a freshman on MSU’s volleyball team. Meanwhile, Gardner started playing football at the JUCO level, then went to East Carolina before finishing his college career at Washington State. The Jaguars selected him in the sixth round of this year’s draft.

SB Nation interviewed Flint to learn more about Jacksonville’s cult-hero quarterback, the origins of his son’s name, and perhaps most importantly, how he gets his arms so jacked.

Author’s note: Interview has been edited for clarity and length.

Morgan Moriarty: How cool has it been to experience Duval culture and how quickly they’ve embraced your son as its QB?

Flint Minshew: It reminds me of how New Orleans is, how it’s a tight, and a very proud, community, the whole Duval thing. You can tell they’re very proud for [the Jaguars] to represent that city, and they take that very personal. So that’s very cool to me.

And Florida’s got such a laid-back atmosphere — just kind of “Hey, you are who you are” and that’s just him, that’s who he [Gardner] is.

MM: Are you surprised at how quickly the Minshew Mania has taken off in Jacksonville and around the league?

A little bit. We saw that last year a little bit in Pullman, and that blew up like crazy. There’s something to be said about somebody just coming out of the blue like he did. Sixth-round pick, it’s almost like he’s a normal guy — he’s 6’1’, 225 pounds, so it’s not like he’s some 6’5’ Johnny Blue-Chip out of a blueblood program.

He appreciates on a very high level the people that have given him a chance. And he’s more about proving the people right that believe in him. And he owes — we all do — a debt of gratitude to [the Jaguars] for drafting him. So many of these guys, when they’ve had all their choices laid out for them their whole life, you kind of lose some of that appreciation.

Whereas with him, man, he’s had to beg, borrow, and steal just to get where he got. And when somebody calls him and says, “Hey, I want you to come play for me,” there’s a big appreciation for that.

MM: How much of that appreciation goes to [Washington State coach] Mike Leach, too?

FM: Truthfully, it changed his life. It changed his trajectory to be where he’s at right now. And one thing Leach did was trust him to run the offense. They were on the same page, and you see Leach, he’s not out there beating himself on the chest. He gives credit where credit’s due. He doesn’t have an ego.

MM: Gardner had somewhat of a journeyman career as a QB. Now, he’s been able to step into Jacksonville’s starting role pretty seamlessly — what is it about him that’s allowed him to adapt pretty well wherever he goes?

FM: Well, part of it is his personality. He’s understood at a young age when you’re the quarterback, people are looking at you. You have to set the tone as far as how the people around you work. And if you want people to follow you, you better be the hardest-working one out there. And we’ve preached [that] to all of our kids at an early age, that the only thing they can control is, you can choose to be the hardest-working person.

You’ll never be the biggest, the tallest, the fastest, the strongest, but you can literally outwork anybody. And he took to that at a young age.

MM: There are a ton of stories out there about Gardner, but what are some things you want people to know about him? Or maybe a favorite story of him growing up?

FM: He was always very competitive — extremely competitive. To a point where, at times, his mother would almost kind of worry about that. Like, he’d want me to beat up other kids’ dads who didn’t bring them to practice. Because they’d lose a ball game and he’d be like, “Dad, beat his dad up. He doesn’t ever bring him to practice, he ain’t worth a crap!”

And then you’d go play a soccer tournament, and we’d lose in the finals or something. He couldn’t understand how his teammates could be laughing and joking after losing a game. We would play this one team and we’d go back and forth — they beat us some, we’d beat them some. After one tournament, they wanted to get together and take a picture and Gardner’s like, ‘I’m not taking a freaking picture.” Just always ultra-competitive.

MM: How much did sports play a role in your family’s life as your kids were growing up?

FM: You know, I guess we’re just fortunate, [my wife and I] both have the same view on how to raise our kids. I fought karate tournaments, which I really liked because that was just me. I loved playing football, I played basketball and all of that, but the good thing about karate, it was just you fighting someone else. So I was exposed to that at an early age. And then my wife was a good basketball player coming up. Again, we were somewhat talented, but we had to work harder more than we were talented.

We’ve praised our kids when they’ve lost, when they’d give good effort, and we’ve chewed them out if they won if we didn’t feel like the effort was there. So we let them know early on that hey, we’re proud of you because of how you worked.

Winning ball games, doing well in stats and all that, that’s great but … when you get your kids in sports, what are you really trying to teach them? You’re trying to teach them to be a good teammate. Those things will carry you further in life than just being able to run fast or jump high.

MM: OK, I have to ask about the whole name thing — since you go by Flint, there’s been rumors that there isn’t a Gardner Minshew I. Can you clarify that?

So it’s my name. I just go by my middle name, he goes by our first name.

MM: And your dad wanted to name him Beowulf. How real was that to almost happening?

FM: Well, it was real that my father wanted that, but it [only] got that far. I don’t even know if he would even mention that to my wife.

MM: So I’m guessing your wife vetoed that.

It’s kind of one of those things that if I had mentioned it, I might’ve been ducking at the same time.

As long as he likes it, I’m good with it.

I know people think that he does that stuff for marketing, and I think part of it is, and I’ve always told him this “You gotta go out there and have fun.” If you’re tight, you are going to be a step slow, and you have to be loose. And I think it’s just part of him being loose and helping his teammates be loose.

MM: Do you have any plans to grow one?

I’ve never been a mustache guy. I used to grow a beard a lot, but the Minshews kind of have red beards, and so now my beards are red, black, and gray. I look like a mangy dog if I try to do that.

MM: During that TNF game, Twitter was abuzz about your workout routine. You told NFL Network after the game that you run marathons.

FM: That’s bullshit, I don’t run any marathons. That’s kind of one of those things that I started answering that a few years ago because what are you doing to answer?

MM: You’ve gotta give me your arm workout, man, the people have to know.

FM: It’s all over the place. You know what, I’ve got big people [in my family]. My dad was my height, and when we buried him he was probably 350 pounds. Really, I do more to try to keep weight than I do put weight on. So I do a lot of body weight type exercises, TRX straps, some of that, some kettlebell work. I’m just a big guy.

MM: What are you maxing out at with bicep curls?

FM: I don’t even do a bicep curl. I might do some pullups, and I might do some different compound movements, but I really don’t do ‘em. I could do plenty if I wanted to, how about that?

MM: On a final note these last few weeks had to have been crazy for you all. What’s it been like?

FM: It’s been awesome. I mean Gardner’s always had to kick down the door wherever he’s gone. We always knew he’d succeed. Now did we think Foles would get hurt the first week and we’d be sitting here? No way. But at the same time, you kind of get caught up and just want him to do well and help his team.

[Gardner] won the game the other night [against Tennessee], and now it’s time to go to Denver and take care of business again, though. He’s always had this. Wherever he went, he’s been rolling.

ECB’s The Hundred under fire for KP Snacks sponsorship|Sports Information, The Indian Express