Trending in China: ‘Syrian Style’ Cafes That Look Like They Have Been Bombed

Chinese influencers and diners are flocking to trendy restaurants and cafes decorated in “Syrian style” so they could photograph themselves posing in front of gaping holes and run-down walls that look like they have been bombed in a war.

The so-called “Syrian debris style” refers to designs that often feature a grey color tone, exposed brick walls, and jagged structures. Some places also have cracked clocks, television and surveillance cameras that appear like they have been damaged in a war.

It’s unclear how the trend originated. Influencers have since 2020 promoted a wide range of industrial-looking restaurants, cafes and bars across the country by branding them as “Syrian style.” The term is also used to describe shabby-looking things in general. “I smashed my mobile phone again today and stamped on it,” one Weibo user wrote in October. “Now my phone is of Syrian style.”

The term’s unlikely popularity is a result of insensitivity toward the devastating Syrian civil war in China’s insular cyberspace, and of the fierce competition among influencers and business owners, who are constantly vying for attention by flooding buzzing hashtags.

Wang Fei, who owns a barbecue restaurant in Jining, Shandong province, said he labeled his place as “Syrian style” on Douyin, China’s TikTok, because the term could attract customers eager to take cool photos for their social feeds, even though he found the name quite offensive to the Middle Eastern country.

“If I call it ‘normcore,’ no one would know what it is exactly,” the 21-year-old told VICE World News. “But if I call it ‘Syrian,’ people could imagine it in their head, and would want to check it out.” 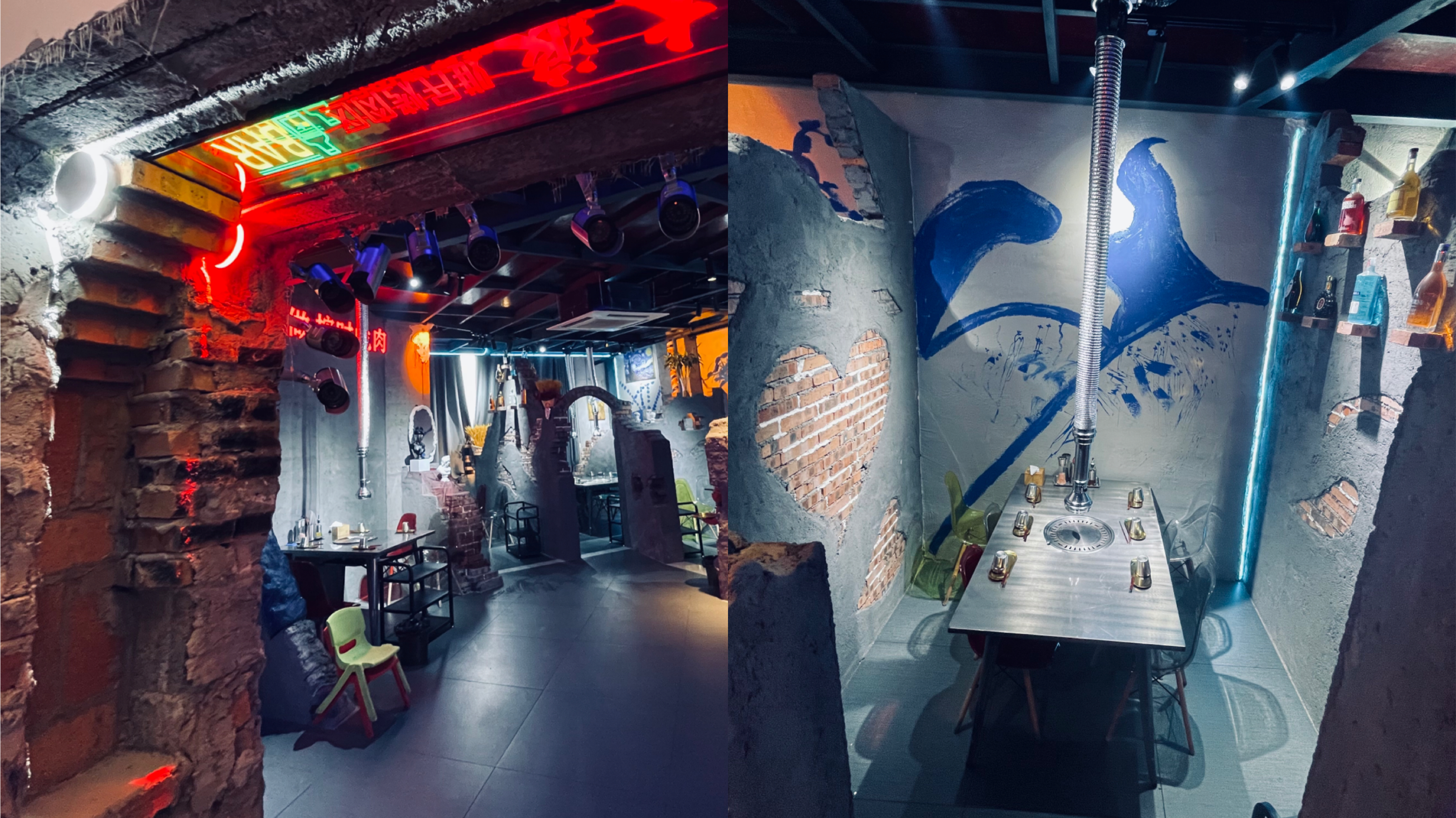 Wang’s videos showing the “Syrian-style” interiors were so popular that he got online inquiries every day from other entrepreneurs interested in imitating the design, Wang said. He said he had helped eight other local businesses, including a cafe, a hotpot place and a hair salon, in adopting a similar design.

In his own restaurant, Wang also set up a “refugee barbecue area,” where sad music is played in the background. “These bring internet traffic,” he said. “You don’t get viral by talking about how good the food is.”

The “Syrian style” has also been applied to dessert places, fried chicken joints, offices, homes, and clothing stores, according to social media posts. The key elements of the style include red bricks, bare cement walls, reinforced concrete, and partly damaged items, according to an introduction of the “Syrian post-war style” posted by an interior designer on WeChat.

Some internet users have criticized the term as capitalizing on others’ suffering. “Syria has been engulfed in a war. I didn’t expect it would be used by some privileged people to describe an interior design style,” a person wrote on Instagram-like Xiaohongshu in June. “I thought Chinese people would be the last ones to see wars in such a privileged way.”

“Can you imagine some shop calling itself ‘Wenchuan earthquake debris style’ or ‘Zhengzhou flood debris style’?” another Xiaohongshu user commented in September, referring to past disasters in China. “As a human, you should have humankind’s dignity, compassion and empathy.”

The advent of social media has revamped the aesthetics of Chinese cities as business owners try hard to add viral potential to their shop spaces and products. Many restaurants set up “check-in points” for diners to take posh photos, and create dishes that look so ostentatious that people could not help sharing the pictures on the internet.

When a new concept turns out to be a traffic driver, imitations pop up across the country, as in the case of debris style.

The newcomers include a cafe in the southeastern city of Fuzhou, called “No Rules Rules.” During its soft opening last month, the cafe marketed itself as “a war style that emerged in the community” with “a sense of shabbiness that originated in Syria.” On Xiaohongshu, dozens of influencers have posted photos of its exposed brick walls and a damaged-looking Bearbrick toy.

A 33-year-old customer, who gave her name as Melissa, told VICE World News she was impressed by what she called a retro, chaotic, Syrian style on a recent visit. She said the term only referred to the design, and indicated no discrimination against war-torn countries.

“It also illustrates a sense of awe and fear toward wars, and gives people a feeling of rebirth,” she said. “But most importantly, compared to regular cafes, this style makes better photographs.”