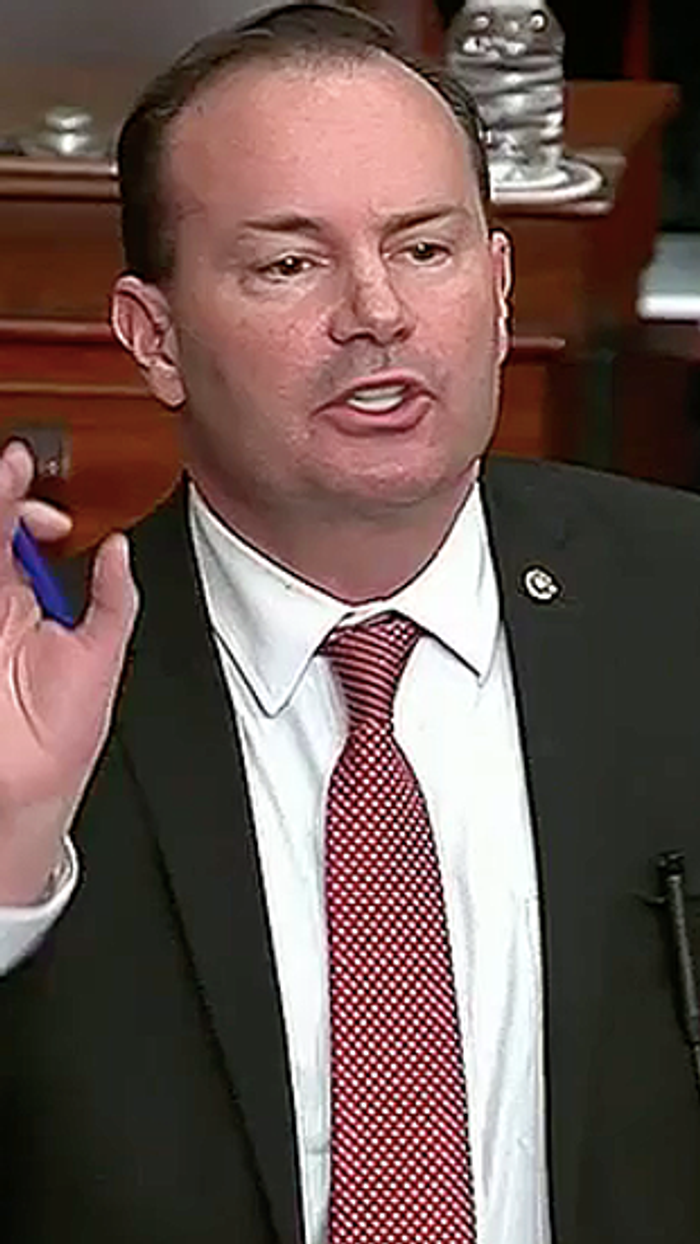 According to a report from the Atlantic’s McKay Coppins, Utah Sen. Mike Lee’s path to the Republican primary nomination in 2022 to hold his seat is far from a sure thing as he has increasingly alienated voters in his state with his excuses for Donald Trump and his slavish devotion to the former president.

As Coppins notes, Lee’s fall-out with his constituents, in a state that is dominated by the Church of Jesus Christ of Latter-day Saints, has grown after he once compared Trump to the Angel Moroni at a rally and accelerated after he gave the former president a “mulligan” after the Jan 6th insurrection.

Now, Coppins writes, an assortment of factions within the state are lining up to end his tenure in the Senate. Noting that Lee’s approval rating sits at 45 percent, Coppins reports that the incumbent is increasingly seen as vulnerable.

“For many Utahns, the Trump rally was the breaking point. A few days before the 2020 election, Senator Mike Lee paced across a red, white, and blue stage in Goodyear, Arizona, microphone in hand, rhapsodizing about the president’s many virtues while he looked on. Lee’s talking points were mostly familiar. But then he arrived at a novel line of flattery, pitched to his coreligionists: He compared Trump to a figure from the Book of Mormon,” Coppins wrote. “The backlash was swift. Members of the Church of Jesus Christ of Latter-day Saints aren’t used to seeing their sacred texts so brazenly politicized on the stump, and many members—including even some Donald Trump voters—regarded the invocation of a scriptural hero at a MAGA rally as blasphemous. Lee’s social-media feeds lit up with outraged constituents, the national media piled on, and the senator hastily backpedaled, apologizing to those he’d offended.”

Pointing out that many back home in his conservative state are unhappy with his D.C. “showboating,” Coppins wrote that Lee’s “penchant for provocation routinely embarrasses his home state and its predominant religion,” adding, “Lee is bracing for a concerted, multifront campaign to unseat him. He seems to know that a third term isn’t guaranteed.”

Of concern to Lee is a recent poll that showed “barely half of likely GOP primary voters say they’d vote for him again,” with one political consultant bluntly stating, “this guy hasn’t faced a serious challenger since he won the Republican nomination in June 2010.”

Ac Coppins points out, Lee’s embrace of Trump is one factor in his problem with voters back home, the other is “how he’s helped to import MAGA-style politics to the state.”

“The Church maintains a strict policy of electoral neutrality, and its senior leaders do not publicly support or oppose candidates,” the report states. “But the appearance of tension between Utah’s senior senator and the Church has been a subject of intense speculation in some quarters. At the very least, critics argue, Lee has demonstrated a willingness to gratuitously needle the Church to enhance his own stature in the national conservative firmament.”

The report adds that, should Lee win his primary, he’ll still have to face independent Evan McMullin in the general election, with McMullin planning to make Lee’s defense of Trump after the Jan 6th insurrection a central topic of the campaign.

You can read more here.