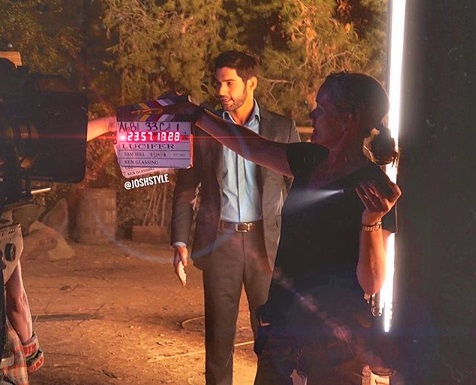 Lucifer’s co-showrunner Joe Henderson wrote a bittersweet message to fans that the crew has started working on the final episode of the popular series.

In a tweet, Henderson wrote: “Today we started breaking the final episode of Lucifer. Still plenty of work to do, but holy shit, we are going to end this show in style.”

Today we started breaking the final episode of #Lucifer. Still plenty of work to do… but holy shit, we are going to end this show in style.

The final season on Netflix will include 16 episodes, with the first eight scheduled to be dropped this spring.

Henderson has said he’s grateful that Netflix picked up Lucifer after Fox canceled the series in 2018, and let the writers and cast have the ending the want.

He shared that other showrunners have approached him and admitted that they were “jealous of actually knowing the show’s going to end.”

Most cannot “actually end the show on your own terms. You don’t get a chance to actually know that you’re telling the end, and wrap those stories to satisfying conclusion. So that I’m thrilled about. It’s obviously bittersweet, but a golden opportunity.”

Had Netflix not picked up the series it would have ended on FOX with a cliffhanger at the end of Season 3.

But with the end of the show in sight, some fans have been hoping another campaign could save it.

Co-showrunner Ildy Modrovich told fans last summer “that a fight won’t change things,” and that the cast was grateful to Netflix for the chance to end the series on their own terms.

A message of love for our #Lucifans

But there is still an online petition to force Netflix into a 6th season.

But the reality is, according to Henderson, production has started on the final episode.

“Because we know where we’re ending, the fans are going to get the ending they deserve, and I could not be more thrilled about that,” said Henderson.

The post Works Begins On FINAL Episode Of Lucifer – “We Are Going To End This Show In Style” appeared first on Jim Heath TV.

Trump and his GOP ‘commissars’ are the ones using ‘Soviet-style’ techniques to keep him in office: conservative reporter